PCE inflation is flat or declining since Feb

I was looking at long term trends in PCE inflation (the Fed’s preferred inflation measure) and there are a few observations I find interesting.

The long series makes clear that a few months of data points are often just little squiggles on the larger trend and it usually takes many months to define a trend.

Looking at this chart, it’s not obvious to me that changes in the Fed funds rate, whether shifts up or down, have much of an impact on inflation. Since the early 1990s, inflation has bounced between 1% and 3% seemingly regardless of the Fed funds rate. It almost appears that many of the other forces in the economy that influence inflation might be more important over most of the historical data (a recent post on the macro impacts of demographics comes to mind: Only Age matters...).

Interestingly, M2 money supply growth has slowed substantially to a more normal level now. And the velocity of money is also historically low (Velocity of M2 Money Stock (M2V) | FRED | St. Louis Fed). Slower M2 growth combined with low money velocity should put downward pressure on inflation (of course there are other forces at work, such as all of the covid supply shocks including China lockdowns, Russia-Ukraine).

Looking at this chart, it’s not obvious to me that changes in the Fed funds rate, whether shifts up or down, have much of an impact on inflation. Since the early 1990s, inflation has bounced between 1% and 3% seemingly regardless of the Fed funds rate

I have had my own suspicions about this for a while.

I reminds me of tacking a big square rigged sailing ship. When they get ready to bring the ship about the first thing they do is ease the head sails and sheet in the main at the stern. Once that is done, then the put the rudder over.

It seems if the rest of the world’s economy is not set properly, the action of the FED is like cranking the rudder over with the sails set poorly, there is simply little response.

With the Velocity of money starting to increase with pricing power returning to labor, Inflation will return. We have noted that we have had a massive increase of M2 over the last decade with inflation bouncing off zero. Now we have steady or declining M2, tightening liquidity and are still seeing positive inflation. I attribute this to increasing Velocity

So while inflation may be moderating, it is here and will probably remain here as long as labor has pricing power.

So while inflation may be moderating, it is here and will probably remain here as long as labor has pricing power.

Absolutely true but that is advantageous.

The IRA(edit) is moving the effective tax rate on top earners and corporations up to cut off the inflation and greatly expand the industrial base further out. The higher labor rates will create consumer demand. This is a win/win situation bringing down input costs, creating manufacturing economies of scale and vastly increasing major government projects towards R&D and much needed infrastructure. The next two decades are American dominated.

adding, there is no way at all for the labor market to be reigned in. Labor is in very short supply. The baby boomers keep going on and on about crushing the labor market and immigration etc…none of those thoughts will come to fruition. The baby boomers have very little say at this point. Mostly the Xs, Millennials and Zs are deciding what happens. Many of them decide completely the opposite of anything the boomers want just because of how bad our track record was.

PCE inflation, while high this year, is basically flat this year since February.

That is indeed the very problem! It is flat and STUCK near 7%. That’s why the fed plans to keep rates higher for longer.

And while the fed used to be able to move their levers more effectively, when the USA was a larger portion of the world economy, and there was less globalization, today they can’t be nearly as effective. Just because the fed raises US rates and squeezes US consumers of goods, energy, services, doesn’t mean that they have as much of an effect on Asian and European consumers of those things. Furthermore, the US now represents a smaller portion of that total consumption, as Asia has dramatically grown their economies. If the fed can reduce, let’s say, energy consumption in the US by 5%, the effect on overall prices of energy is muted, because Asia/Europe will not necessarily also be reducing consumption (though it is pretty clear that THIS time, Europe will almost definitely be reducing consumption, and China may also enter recession shortly). I think the fed is on a tightrope right now, they can only suppress consumption, they can’t create additional production … they can hike rates rapidly, and hold them high, but that will very likely put us into recession at some point … or they can allow the economies of Europe and Asia to do the hard work of suppressing consumption, and then wait a little bit longer for inflation to decline.

If I were the fed, I would slow down the rate hikes for now, 50 in Nov, 50 in Dec, and then wait and see what happens in 1Q23 and 2Q23. It is quite likely that Europe reduces consumption of goods this winter as they shift more of their spending towards energy. And that reduction may be just enough to cause prices to moderate world-wide.

Mostlylong, thank you for a good analysis with data.

Whether the CPI or PCE, the “C” represents consumers. Consumer inflation results when the growth in consumer demand exceeds the growth in supply of goods and services.

As you wrote, the Fed’s policies directly impact banks but only indirectly impact consumers. When the Fed pumped money into the banks with ultra-low rates (2001-2019) the result was inflation in asset prices. Consumer inflation didn’t increase because the banks did not give (or loan) much money to consumers at low rates.

M2 is a measure of cash and checking accounts – money that can actually be spent by consumers. That is why your insight is good. To this, we need to add consumer borrowing. The linked chart shows that consumer borrowing is at an all-time high and growing faster than any time in history (except 2010). This will increase inflation since many consumers pay for goods and services with debt instead of M2 money. 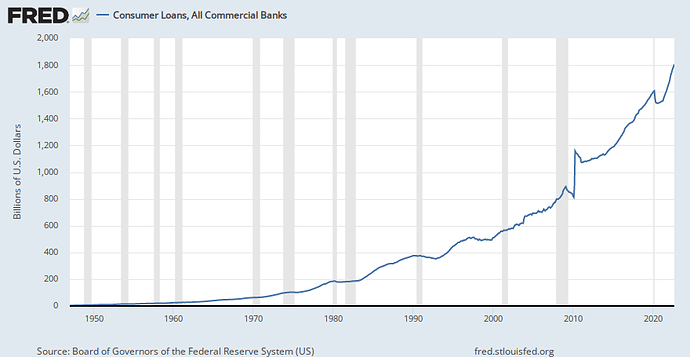 I think that the Fed will increase the fed funds rate by 0.75% in November since the markets are expecting that. They may slow their rate of increase in December to 0.5%. They have already said that they expect increases in 1Q23 but those may be smaller, 0.25%.

I don’t expect the Fed’s actions to have a rapid impact on consumer inflation, however measured. Monetary changes simply don’t impact consumers the way that fiscal changes do. Anything that puts more money into consumer pockets and/or makes borrowing easier will increase inflation if supply doesn’t increase commensurately.

One way to reduce inflation is to increase the labor force by increasing legal immigration. But that would take an act of Congress. The Fed has no control over immigration.