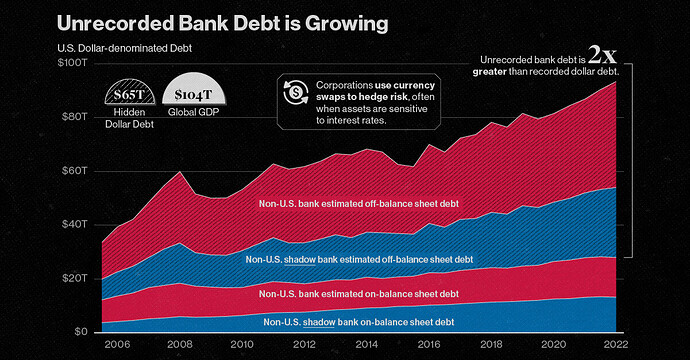 Since 2008, the value of unrecorded dollar debt has doubled. Here's why this is increasing risk in global financial markets.

No less than $65 trillion in unrecorded dollar debt circulates across the global financial system in non-U.S. banks and shadow banks. To put in perspective, global GDP sits at $104 trillion.

The risk from growing dollar debt and these swap lines arises when a non-U.S. bank or shadow bank may not be able to hold up their end of the agreement. In fact, on a daily basis, there is an estimated $2.2 trillion in forex swaps exposed to settlement risk…[end quote]

It’s likely that the Federal Reserve would step in to provide liquidity in the event of a large-scale credit crunch. But smaller-scale “crunchettes” could hurt individual borrowers, affecting their stock prices.

A large-scale crunch would show up in the Financial Stress index. 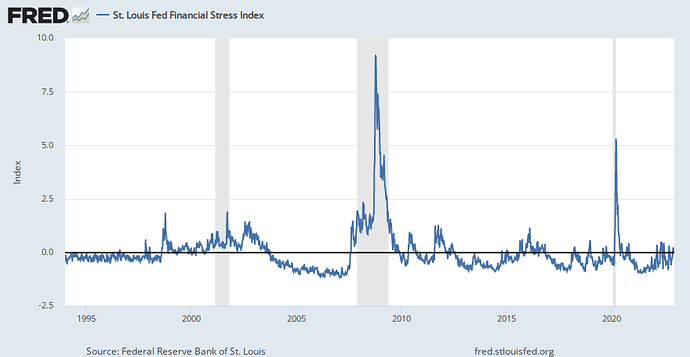 The Fed is currently doing a fine job maintaining financial stress at neutral. They would resist stepping in to provide liquidity during their current tightening cycle unless there was a real crisis.
Wendy

The failure rate might be in a range where western corporations can mostly afford it.

The roiling of the markets will hit the bond markets. Just like Truss in the UK did in her proposals. The BoE stepped in to buy bonds.

Swaps are a face value for the trading of an interest differential. The face value in many cases may not actually matter. It is not exactly the loaning of the money.

In any event we have some insulation from fall out on the Chinese side of things. Only recently did the Chinese begin to open their swap market to the outside world. It might be only three or four other nations in the region that can trade in Chinese swaps.

Again not so simple because western corporations building factories with Chinese partners used US swaps not Chinese swaps so to speak.

But those western corporations generally have all been pulling out of China. The money trail does not point to failed corporations leaving factories behind in China and debt owed. That is generally okay.

Again the US Treasuries are the story. Not so much the US or even global economy.