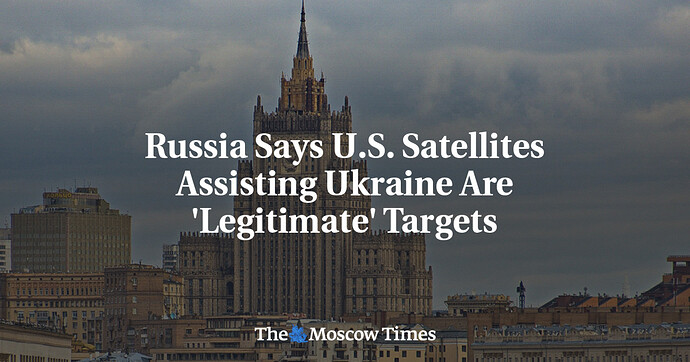 Commercial satellites used by the United States to assist Ukraine in its war against Russia are “legitimate” targets for attacks, a Russian diplomat said Wednesday.

Commercial satellites used by the United States to assist Ukraine in its war against Russia are “legitimate” targets for attacks, a Russian diplomat said Wednesday.

“Quasi-civilian infrastructure could be a legitimate target for retaliation,” the state-run TASS news agency quoted Vorontsov as saying… Last November, the Russian military tested an anti-satellite weapon in outer space, which the U.S. condemned as a “dangerous and irresponsible” space missile strike…[end quote]

Communications and information have been vital in war since the beginning of time. The satellites that provide intelligence about Russian troop movements and free internet to Ukraine (from Starlink) are assets that the Ukrainians put to excellent effect but could never afford themselves.

Konstantin Vorontsov is the deputy chief of the Russian Foreign Ministry’s arms control and nonproliferation department. It’s his job to try to maintain the peaceful use of space but warn that pressure is growing to attack commercial satellites.

Elon Musk is playing in a pretty big sandbox when he spits in Putin’s eye.

I wonder how the U.S. Space Force would respond if a commercial satellite was attacked as a war participant? The Space Force is organized under the aegis of the Air Force the same way that the Marines are organized under the aegis of the Navy. Their mission statement includes the words “fight” and “military” so they are definitely not there for observation like NASA.

Shooting at Musk’s property? We might feel compelled to defend the satellites.

We defend oil pipelines around the world. We really have to defend satellites. If we do not then in any conflict they go for our satellites.

It will become the first war in outer space for humans.

We defend oil pipelines around the world.

A century ago, the US was defending bananas.