Setting Up a Trade

“If you want to learn to trade, you gotta trade.”

So here’s a stock that’s “at the gate”, meaning, per Quill’s Simon Sez method, there’s been a confirmed ‘Buy’ signal. 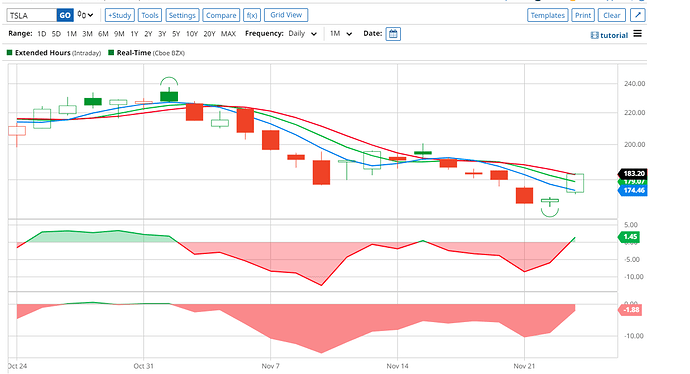 The stock is TSLA, a company I actually know nothing about, despite the fact it’s frequently in the news. So the next thing a prudent trader would do --and I do mean ‘trader’, not ‘investor’-- is pull its funnymentals to see how it’s making its money, if any.

Everyone will have their own method of a vetting a stock tip (which is all that a "Buy’ signal is, no matter how it was obtained). But here’s how I do it. I go to Simply Wall Street (requires a subscription) and see what they say. Here’s a quick summary. 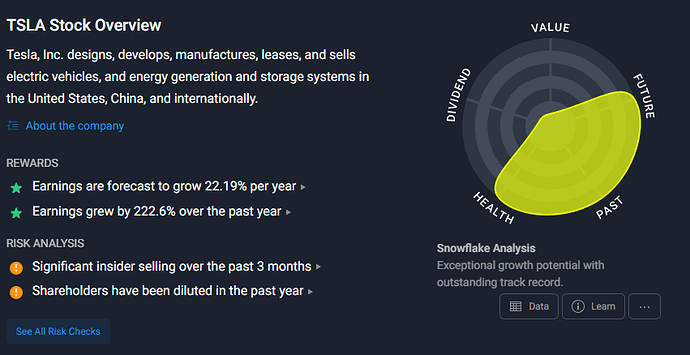 Three things are obvious, even from just the picture. (1) The company is healthy and profitable. (2) Its future is forecasted to be good. (3) The stock isn’t cheap.

Were I an “investor”, # 3 would matter, and I wouldn’t buy the stock. But this intended to be a trade that might last no more than a day or two. So I don’t care about its very sucky valuation metrics, such as an obscene PE of 51.7x compared to an estimated ‘fair price’ PE of 35x and an industry average of 10.9x.

The reason why I do worry about #1 and #2 is that I need others to want to buy the stock, and they aren’t going to be doing so if the business is financially compromised or if it forecasted to have poor prospects.

Due your Due Diligence.

The scanner is Norm North’s, CandlePower Ultra 6, the best ever created. Regrettably, it’s no longer sold/supported. If you have a version of OmniTrader , some of CP’s functionality can be created. Ditto if you have MetaStock, AmiBroker or StockAnalyze.

Hi Arindam, thanks for explaining Quills method to enter with this example. I am still learning and so am curious how to exit this trade setup. Additionally, curious about how the stocks from your scanner does Friday onwards. Good luck with your trades!