Matt Levine, and his tour de force look at Cyrptocurrency is going to be the best read of 2022 - and perhaps forever - on this subject. Not only has he written a boffo history of how we got to where people were paying millions for digital apes which took someone just a few minutes to create and post on one of the NFT projects.

And if you are a regular reader of Matt (a month ago in a Bloomberg article he aced how last week would end with Musk & Twitter) you have to know he takes his usuual time eviscerating obvious fraudsters in Crypto. (His looks on Musk, Wirecard, Theranos, Housing, Enron, etc., was like knowing the end of movies which he was directing from behind a pushbroom attached to his computer’s keybooard.

Levine’s best contacts on Twitter are legends who broke stories on the Housing Bubblle, Housing Crash, Evergrande, China RE Crash, China’s “Tofu Construction” and Bridges Which Fall Down Within a Year of Opening," Russia’s Mad Vlad’s Sinking to the Bottom Line and more. Levine is like a forensic accountant with a flaming calculator coming out of the skies to administer a little bit of comeuppance to the worlds psychopaths and sociopathsl

Levine is on it.

For the second time in the magazine’s history, Bloomberg assigned an entire issue to one writer. Matt Levine wrote last week’s magazine, cover to cover.

Here is his flowing 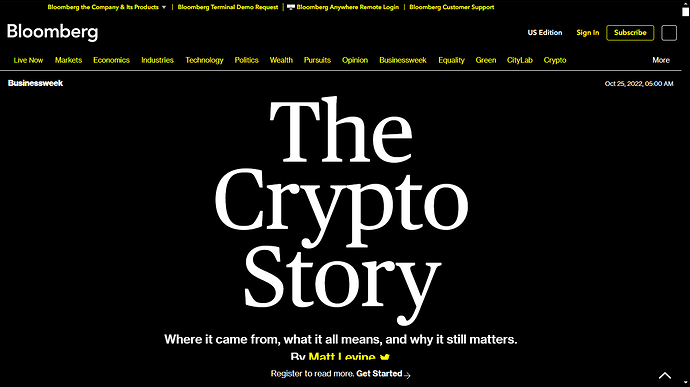 image1366×768 57.4 KB
work, and it is fun to read. 40,000 words, all written in an easy to understand lessons, examples, and mini-essays. Levine poured his heart into this very well researched and hard to understand (by the masses who hate to read books) subject, and what he has produced is a sublime piece of writing.

From Part I - Ledgers, Bitcoin, Blockchains

What if we rewrote all the databases from scratch, in modern computer languages using modern software engineering principles, with the goal of making them interact with one another seamlessly?

If you did that, it would be almost like having one database, the database of life: I could send you money in exchange for your house, or you could send me social reputation in exchange for my participation in an online class, or whatever, all in the same computer system.

That would be convenient and powerful, but it would also be scary. It would put even more pressure on trust. Whoever runs that one database would, in a sense, run the world. Whom could you trust to do that?

Bloomberg - Are you a robot?

For professional reasons I had to do a deepdive on bitcoin years ago. I could stand to understand technical specifics of ETH smart contracts better, but as a rule I understand the ecosystem and technology pretty well. That said, this was an astonishingly good article, probably one of the best pieces of journalism I’ve read on any topic. It has to be a serious contender for a Pulitzer.

If someone wants to understand cryptocurrency, it is well worth their time to read. Thanks for sharing.

I do believe Matt will win an award for this “piece” which he could have turned into a book to sell on Amazon. Bloomberg went above and beyond with this look at Crypto.

Thank you for posting this. I just downloaded all 182 pages of it for reading later.

I in turn thank Michael Bloomberg and his staff at Bloomberg for making this entire issue “free” to the masses online. I made coffees and read one section at a time.

Enjoy, and I hope all is well with you and your son.