There is a shortage of munitions

I was reading a twitter thread on the war in Ukraine. At one point Ukraine launched a months worth of production of artillery shells in two days.

“War is good for business”

For example, a major component of shells is steel. Let me ask you: What percentage of total global steel sales is related to shell production compared to say… the construction industry… or transportation…? IMO… tiny. I can’t see shell production having an effect on steel prices, at least to the extent that you say “Wow… this is an investment opportunity!”

What about the explosives themselves? I dunno.

Probably better to call up your favorite oligarch in Russia and ask for a bit of the action in shell production. I’m sure there’s no problem finding a reputable one who will give you a fair shake… right?

So, the question is, what common element that goes into artillery shells has a limited supply?

Primarily production time–AFTER the current system reaches capacity. There used to be a munitions production facility (4"/105mm and perhaps other sizes) near here, but it was closed years ago and the land needs to be cleaned (military pays for the cleanup cost).

“War is good for business”

But to the main question, ‘smart munitions’ must use quite a lot of chips.

But to the main question, ‘smart munitions’ must use quite a lot of chips.

Correct. Plus, they can not be “ordinary” chips, they must be “mil spec”, which makes sense. Ordinary chips might not be able to work in the application of munitions (i.e. high acceleration, etc) whereas a mil-spec chip has been designed and tested to work in that application.

The problem with artillery rounds supply is a production bottle neck. 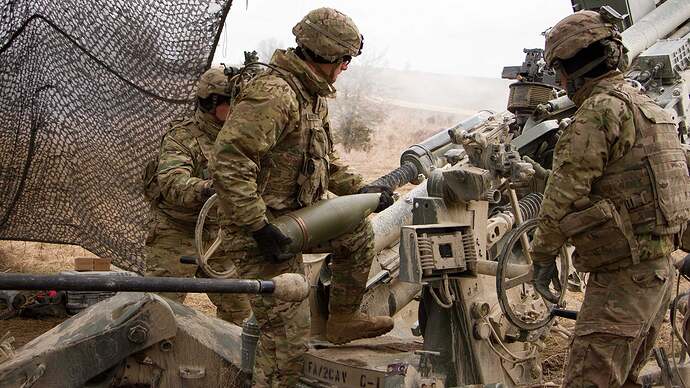 Army plans to 'nearly triple' production of artillery shells after US gives...

The Army is stocking up on 155mm shells and Guided Multiple Launch Rocket Systems to replenish its inventory and keep helping Ukraine.

“We are seeking over a couple of years to nearly triple our production of 155 [mm shells],” Bush said on Wednesday. Congress has been supportive; we have funding; we are executing and making that happen. We are also, through support from Congress, working to dramatically increase our production rate for GLMRS missiles – Guided MLRS [Multiple Launch Rocket System], HIMARS [High Mobility Artillery Rocket Systems] launchers – in most cases doubling or more than doubling current production rates.”

Now Congress is providing the Army with the money needed to replenish its own stockpiles of shells and missiles while continuing to help Ukraine, Bush told reporters at a media roundtable.

While he said he is “not uncomfortable” with the current size of the Army’s inventory of 155mm shells, Bush declined to say how many artillery shells the Army has at the moment.

Oh. What if things turn hot in Asia with China?

Oh boy. Now I read this: 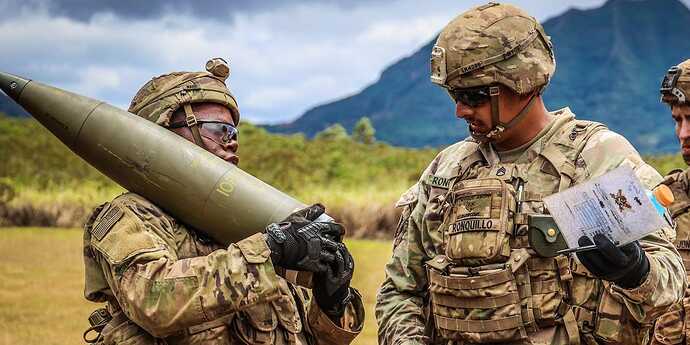 The US military is scrambling to build more ammo for itself and for Ukraine,...

Good thing we on friendly terms with S Korea. 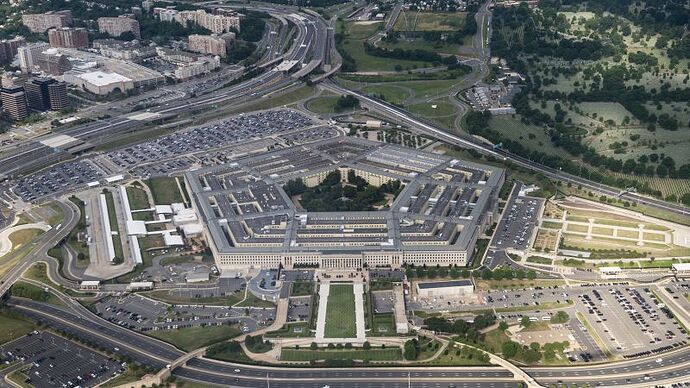 US plans to buy 100,000 rounds of artillery ammo from South Korea for Ukraine...

You would think metals like copper used in brass would benefit. I wonder what fraction of military shell casings get recycled.

Propellants mostly come from nitric acid form ammonia from natural gas. Olin is likely a player. Kingsport, TN used to have a plant owned by Eastman but now spun off.

There’s a guy on YouTube called “Perun”. He does incredibly deep-dives on all this with regards to Ukraine specifically, and also more generally the economics of military expenditures. He occasionally interviews experts, some of which he is able to record.

The short version is that Russia is having to dip into old, often unreliable, stockpiles to feed their war machine. They’re bringing very old systems back online because they have run out of munitions for the newer ones. Meanwhile, Ukraine is receiving infusions of new equipment from the west, plus they have simply taken some modern Russian equipment (e.g. T72s) that was abandoned.

It’s worth checking his channel out if you want to get into this. But be forewarned, his videos are about an hour each, and are very deep-dives. Go back about 4 months, at least, to get the details I just described.

I doubt the suppliers you mentioned will get much. They’re mostly aerospace, and Ukraine isn’t buying F35s. They’re receiving hardware from Poland, Germany, and others, that have nothing to do with American aerospace.

This one deals with some of the economics: 6 Months of War in Ukraine - Economics, Endurance & the Energy War - YouTube

Two procurement lessons learned from the Ukraine War were the stockpiles of weapons built up in case there is a war tend to be much lower than needed To make matters worse, production capacity for additional munitions is usually neglected That means...

The problem with artillery rounds supply is a production bottle neck.

Ayup. It takes a long time to ramp up production, especially when capacity has been cut way back, over an extended period. The US probably has not seen this level of artillery use since Nam. We have all seen the films of US troops training in 40-41 with wooden guns and trucks with “tank” painted on them, because production capacity had not caught up with need. Now we see Ukrainian recruits training with wooden AKs.

US soldiers training for war with makeshift fake equipment such as...

What is this monstrosity? Continuing the war production thread, US tanks prior to WWII were all designed to use radial aircraft engines, because they were light, simple, and powerful. As soon as the war started, every aircraft engine that could be produced was needed for an aircraft. So, what will be used to power the Sherman tank? Ford eventually came up with the GAA V8, that would fit in the Sherman’s engine bay. But what to use in the interim?

Chrysler bolted up this plumber’s nightmare: five of it’s 6 cylinder car engines, which the company was equipped to make in huge quantity, geared to a common driveshaft. I took this pic at the former Chrysler museum in Auburn Hills in 1916. 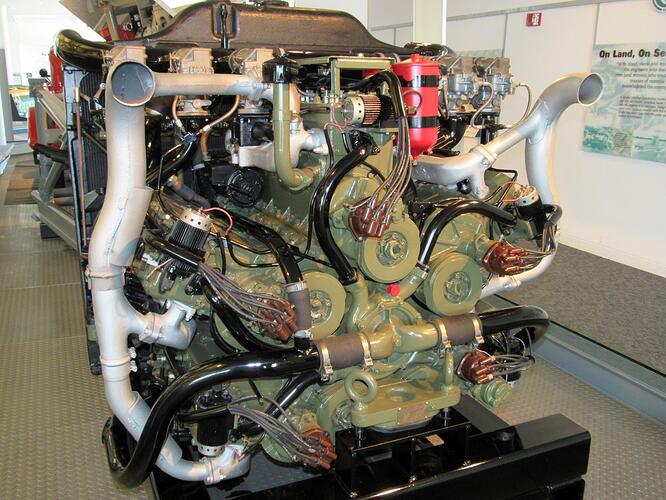 I took this pic at the former Chrysler museum in Auburn Hills in 1916.

Didn’t know that they had color photography in 1916…

I owned a 1938 “pre-war” Packard for about 25 years. Loved that automobile. I also love the story of Packard and how they supported the war effort. Packard engines were also used in planes and boats. 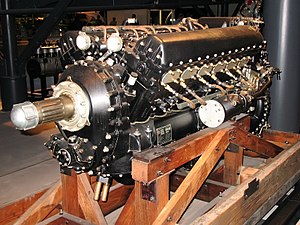 The Packard V-1650 Merlin is a version of the Rolls-Royce Merlin aircraft engine, produced under license in the United States by the Packard Motor Car Company. The engine was licensed to expand production of the Rolls-Royce Merlin for British use. The engine also filled a gap in the U.S. at a time when similarly powered American-made engines were not available. The first V-1650s, with a one-stage supercharger, equivalent to the Merlin XX, were used in the P-40F Kittyhawk fighter and in Canadi... 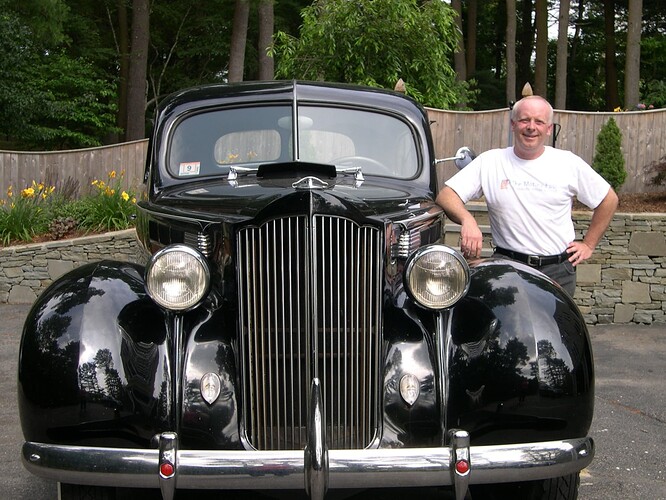 Wow. The car is astounding and beautiful!

Didn’t know that they had color photography in 1916…