I finally got around to listening & reading to the calls from last week (I read the transcript while listening to the call). I posted this on Twitter but wanted to put here too for those not on Twitter (@FinallyFoolin). It’ll be easier when Twitter FINALLY allows long-form tweets!! Definitely way more better that tweet threads. 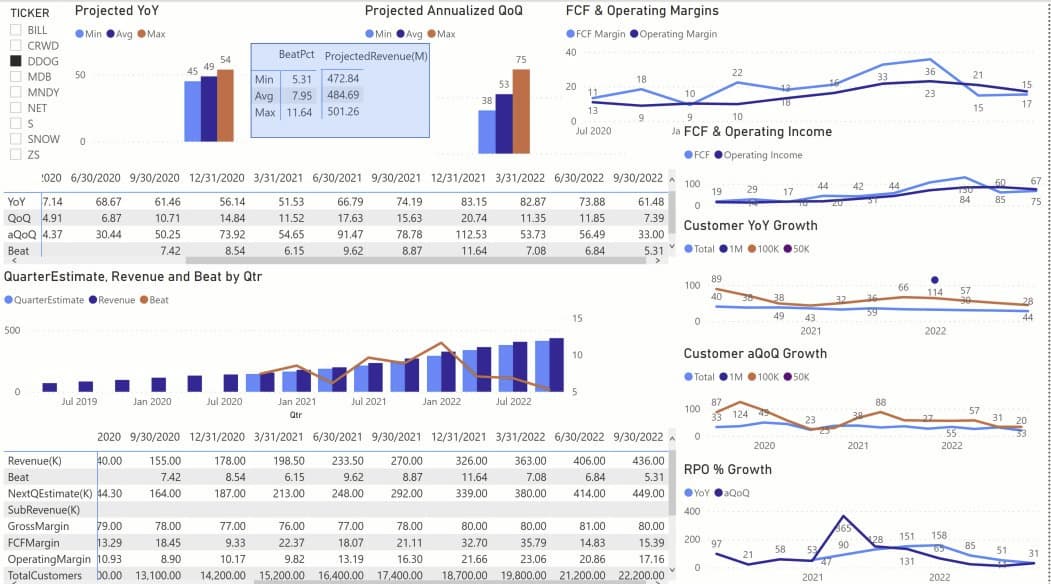 Finished the $DDOG call this morning. My thoughts. Next Q likely to come in mid to upper 40% YoY range. Lots of talk about no issues with NEW customers and record pipeline but EXPAND is slowed, especially with discretionary companies fully in the cloud (food delivery)

This is sort of the opposite of my thoughts from yesterday that larger UPSELL companies will do better. So now we have evidence of both sides of that ($NET being the opposite). haha.

Further slowing and indicating more slowing. Decent chance of a slightly larger beat next Q as they’re being extra conservative and October has been better (as it usually is).

Its interesting to me that they say this about new customers when the trends are clearly smaller (see graph). Also, stated they see macro events earlier than most and NOT seeing further deterioration out of Q3 than they saw out of Q2.

In discussions of the QoQ and guided QoQ… Olivier stated:
“But in turn, it might give us an easier compare for the future.”
FF Interpretation: Once macro improves, we should expect re-acceleration from current growth rates

“we burned only $30 million from inception to taking the company public. We generated a lot more cash since then”

I LOVE LOVE LOVE this!!
“We train our sales team to land as many new logos and new products as possible. And it’s better for them to do 10 smaller ones than 1 larger one. As those 10 smaller ones will each be as big as the 1 large one in the end.”

Overall, I’m happy with DDOG and they are a lower allocation than they were due to me selling some last month. Might up slightly before too long but DEFINITELY not selling out.

“We train our sales team to land as many new logos and new products as possible. And it’s better for them to do 10 smaller ones than 1 larger one. As those 10 smaller ones will each be as big as the 1 large one in the end.”

Also from the earnings call:

First, we continue to see strong growth in new logo ARR, including some large wins in traditional industries. We’ll talk about some of those in a bit.

Second, our sales pipeline is strong heading into Q4 for both new logos and new products. And we’re seeing great opportunities across customer sizes, geographies and industries. Alongside our strength in new logo ARR, this gives us confidence that digital transformation and cloud migration remain a top priority.

Consequently, any decreases in new subscriptions or renewals in any one period may not be immediately reflected as a decrease in revenue for that period, but could negatively affect our revenue in future quarters. This also makes it difficult for us to rapidly increase our revenue through the sale of additional subscriptions in any period, as revenue is recognized over the term of the subscription agreement.

So DDOG is focused on landing new clients and selling new products, but those don’t create a lot of revenue growth immediately. I think DDOG is more cyclical than a lot of the other companies followed here. Two quarters ago it seemed like the only company everyone was happy with. I still believe DDOG is one of the best growth companies. They are extremely well managed. If they add to their customer and product base now, the expand part of the business should really pop once macro turns.

If they add to their customer and product base now, the expand part of the business should really pop once macro turns.

Nicely worded. I think this supports the thought that they WILL re-accelerate once the macro is behind us. Its more likely a slow recovery than like COVID was though so maybe it’ll have a defined time or maybe it’ll look like a slight acceleration for a bit.