I’ve never really been into “trend” investing. I guess the one trend that I’ve actually invested in is the aging of the baby boomers and the resulting impact (growth) of the health care industry. My port has healthcare well represented not so much as a play on this trend but more because there are some solid dividend payers in the sector.

A trend that has become foremost in my thoughts recently is Electric Utilities and the transition towards electric vehicles. If this transition occurs even half as fast as folks think, it’s still got to be a humungous increase in electrical demand and Electrical Utilities, and their shareholders will surely benefit. I’ve not read a single article delving into this topic. So, maybe I’m all wet in my thinking. What do you think?

Hi Rich,
I think Utilities (electric or otherwise) are generally standard investments for the DGI crowd and/or the income crowd.
Why?

I used to have Southern Co (SO) as a core holding for many years, and also Consolidated Edison (ED) as a dividend holding. I then switched the bet to Atlantica Infr (AY)

Yes, I know. But, the case I’m trying to make is that Electric Utilities may one day soon be considered dividend growth stocks, rather than the steady-Eddies they are now. I’d guess on average maybe the typical e-utility might be able to increase rates such that the dividend grows say 4% now. But, once the transition to E-vehicles gains traction maybe that growth rate doubles to say 8% (rate increases + KWH increases) for awhile? Big difference.

Rich - 10% of port in utilities and would like to add another.

Rich, except for $XLE Energy Sector, $XLU the Utilities Sector has outperformed the 9 of 11 sectors in the S&P 500 during 2022. 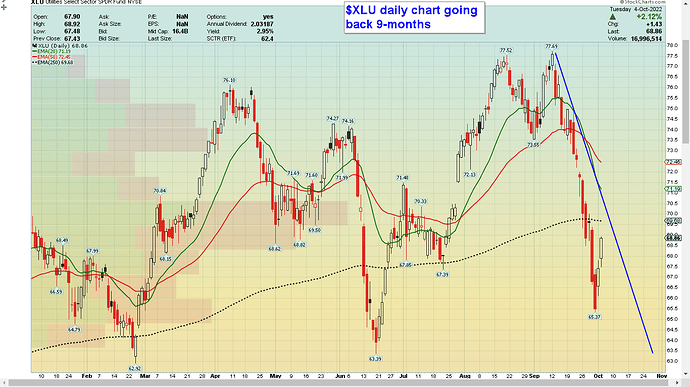 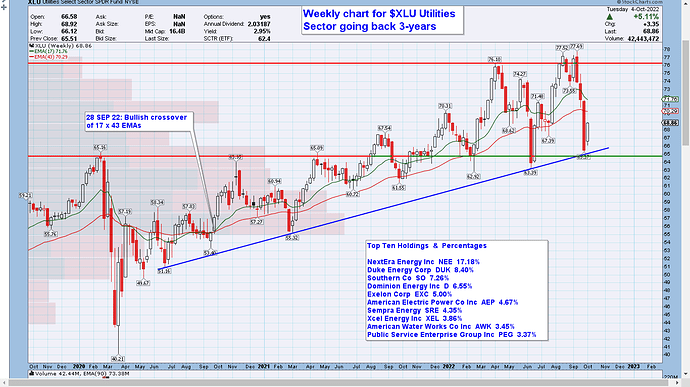 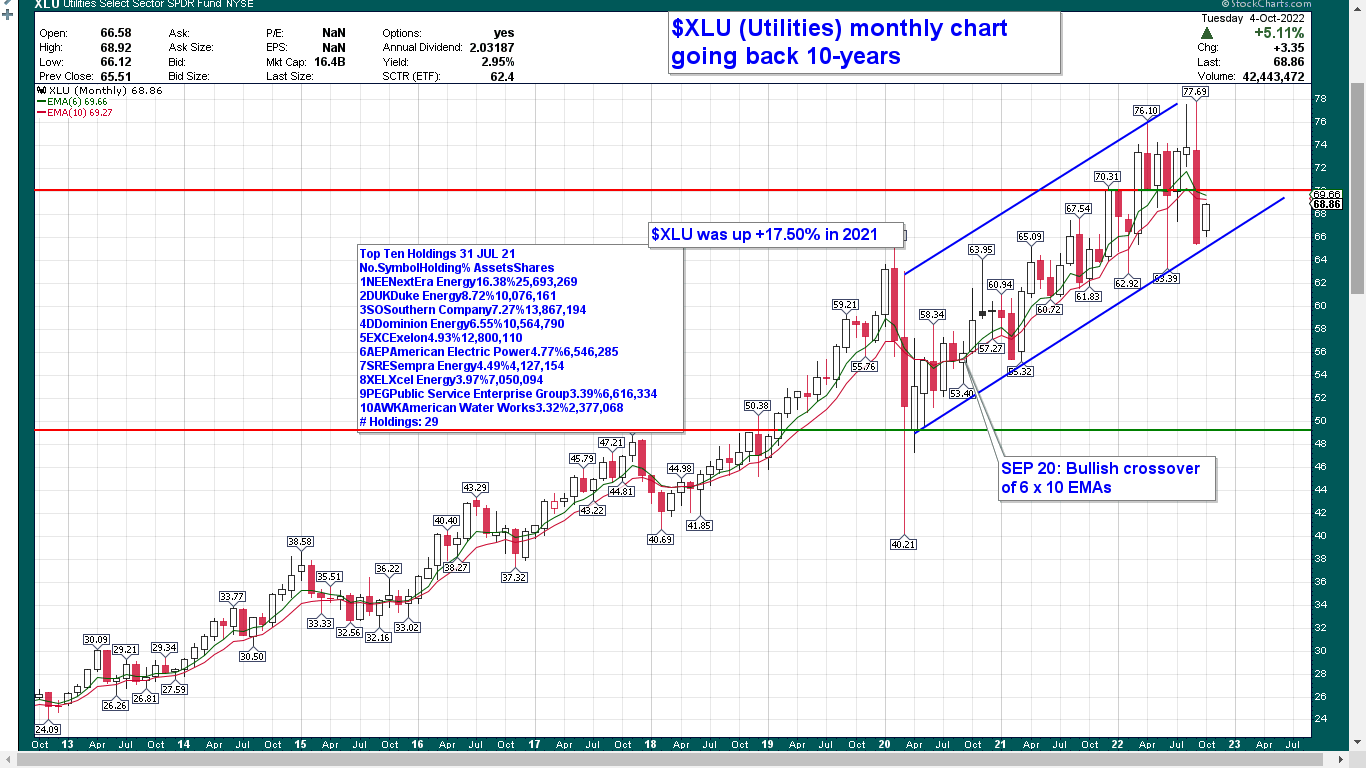 Thanks for the charts. Nice to be able to put those directly on the board, isn’t it?

Yes, but I think that outperformance may have more to do with stock market worries more than anything else. i.e., Flight to safety.

. If this transition occurs even half as fast as folks think, it’s still got to be a humungous increase in electrical demand and Electrical Utilities, and their shareholders will surely benefit. I’ve not read a single article delving into this topic.

I have a bunch, same as most people in my age bracket, and probably for the same reason(s). But just to take the contrarian view: utilities have filled this niche for so long precisely because they’ve been so predictable (and profitable) for so long. Suppose these changes roil the industry?

A sharp demand increase means investment, and lots of it. New sources, more monitoring, more active interplay between parts of the grid where non-dispatchable power is generated, as opposed to the old days when each power producer was uniformly predictable moment to moment.

There will have to be lots and lots of infrastructure build: from new plants, solar panel farms and windmills right down to rewiring America’s streets and distribution farms. There will be expensive underground cabling in cities, new copper required to bring more power to homes for EV charging, and lots of other expenses along the way. These will have to be paid by utilities, and it’s a question whether regulatory agencies used to sleepy meetings will be proactive in these things.

More and faster growth could mean more and faster problems, given inflation and higher costs of everything, will agencies be inclined to grant even more rate increases to pay for these improvements?

Yes, in the end I think the industry will become even larger, and that augers more profit - eventually. The road to getting there may have some unexpected lumps and bumps, however. Just a few years ago who would have through that California utilities would be operating in bankruptcy, or that Europe would be facing such dire economic choices right now?

Yes, lots of investment will be required but I’d remind that regulated utilities are regulated by guaranteeing a certain return on equity, normally between 10 and 12 percent for those I follow closely. So, every dollar invested means that shareholders will earn the same returns on the new investments as they did on the old.

This investment need not translate into rate ($ / Kwh) increases, so long as the new investments are as efficient as the current.

The thing is that solar and wind historically have been more expensive than alternatives. But scale could bring those costs down. And, some people seem willing to pay up for these sources anyway. There does need to be a recognition that solar and wind will never ever be able to supply all of our electric needs. Sometimes the sun doesn’t shine and the wind doesn’t blow – fact of life.

Just a few years ago who would have through that California utilities would be operating in bankruptcy, or that Europe would be facing such dire economic choices right now?

California regulations that make utilities liable for the wildfires they cause are ludicrous. So much so that I, on purpose, exclude California utilities from further consideration.

As far as Europe goes, just about anyone with half a brain knew that relying on Russia was a bad idea. Who didn’t see this coming? They were warned and those warnings were ignored and scoffed at.

I probably own more electric utilities than many and I’m looking to add more at attractive pricing. I’m encouraged that utilities have been performing poorly relative to the market the last few weeks or so.

I think it will be difficult for regulated utilities to become big DGR companies. Political optics are just not favorable.

My largest utility holding has increased its dividend by ~2% for last 4 years. 2% was OK a couple of years ago, doesn’t feel so good this year. Perhaps a larger increase next August. With current yield at 4.6% I added last week.

Both are more than 10% below their 200 DMA. Almost always a good time to this kind of stock IMHO.

John
Utilities are 10.4% of portfolio value and 8.7% of portfolio income.
Also SHORT CC’s on my utility shares sold when stock prices were significantly higher.

If you own any utilities you must realize that if they are culpable for anything they will be sued. So this isn’t a California thing this will be a United States thing. 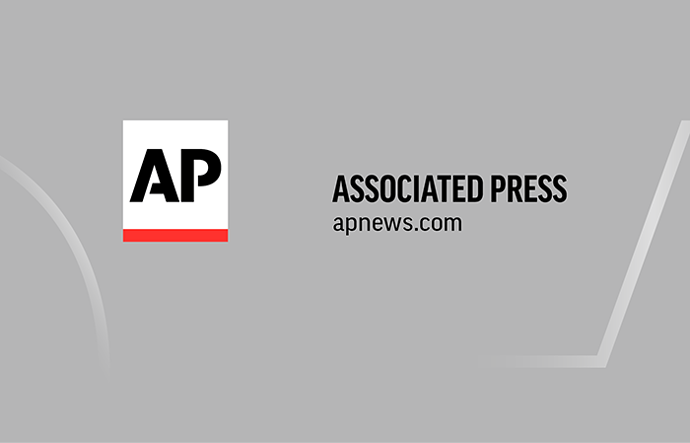 HELENA, Mont. (AP) — The U.S. government, facing rising firefighting costs as blazes rage more frequently and with greater intensity across the West, wants Montana's largest utility to compensate it for a 2010 wildfire near Canyon Ferry Lake east of...

Maybe you need to look at different utilities? Here are the 3 I currently own:

Caution on DTE, the dividend history found on the web may not be entirely accurate. Not long ago they spun out their natural gas unit as DTM. So, I own both DTE and DTM.

WEC is my largest holding of the 3. Historically, they’ve grown their dividend by improving efficiency and not relied as much on rate increases. This type of growth would have better “political optics” as you say.

If you own any utilities you must realize that if they are culpable for anything they will be sued.

Understood. But, I do question the wisdom of this “evil corporation” attitude. If we want to transform society such that electical vehicles play a larger role in transportation and this will require huge investments to pull it off, is the “making-them-pay” approach the way to go about it?

Look, they are already monopolies and highly regulated because of that. If the government, bowing to environmentalists at every turn, and choosing not to properly manage forested areas as a result causing undue buildup of wood fuel and a wildfire results. Who is really responsible? I’d say the governement is.

From a society point of view, what is right? It seems to me that government should properly manage the forests and the utilities should provide the e-juice.

(If there is truly negligence than that’s a different story. But, normal equipment failures do not constitute negligence).

Look, they are already monopolies and highly regulated because of that. If the government, bowing to environmentalists at every turn, and choosing not to properly manage forested areas as a result causing undue buildup of wood fuel and a wildfire results. Who is really responsible? I’d say the governement is.

Many of the California fires have nothing to do with “nature” and are the result of negligence by the company. Every company, whether a bakery, hardware store, or electric utility has some basic responsibilities codified in law. Walk into the hardware store and get creamed by a falling ladder and the business is at fault. No “well you should have known, it’s a hardware store.”

Some of the biggest CA fires have been pure negligence: outdated towers falling over, fires started by careless construction workers, malfunctioning electrical equipment and so on. I’m not close enough to all of the information, but at least some of the fires have been attributed to “fault” in procedures by the power company, and that done through the legal system.

I will say that here in Tennessee when I see high power transmission lines snaking over mountains I also see a pretty wide swath of forest that’s been cleared underneath, presumably to stop errant sparks from igniting casual brush. And while we have had some pretty nasty fires, we don’t have nearly the problem that seems so prevalent in California.

It appears to me, though I can’t be sure, that it isn’t “environmentalists” causing the problem, it’s a company culture of disregard of basic safety practices amid an environment which is susceptible and which therefore ought to be heeded better.

No I get it Rich and I agree with you. If it was because of equipment failure, that was an accident I can understand but they have high power lines going through forests. When they put them up they cut a wide swath away from the lines in order to install them. That area needs to be maintained and what I understand they made a conscience decision not to do that .

Just an updated look at the $XLU charts 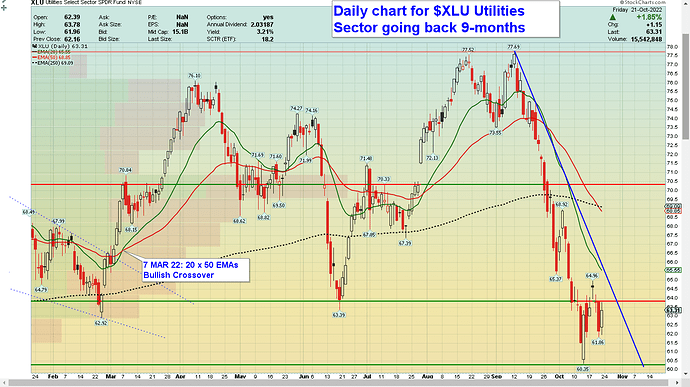 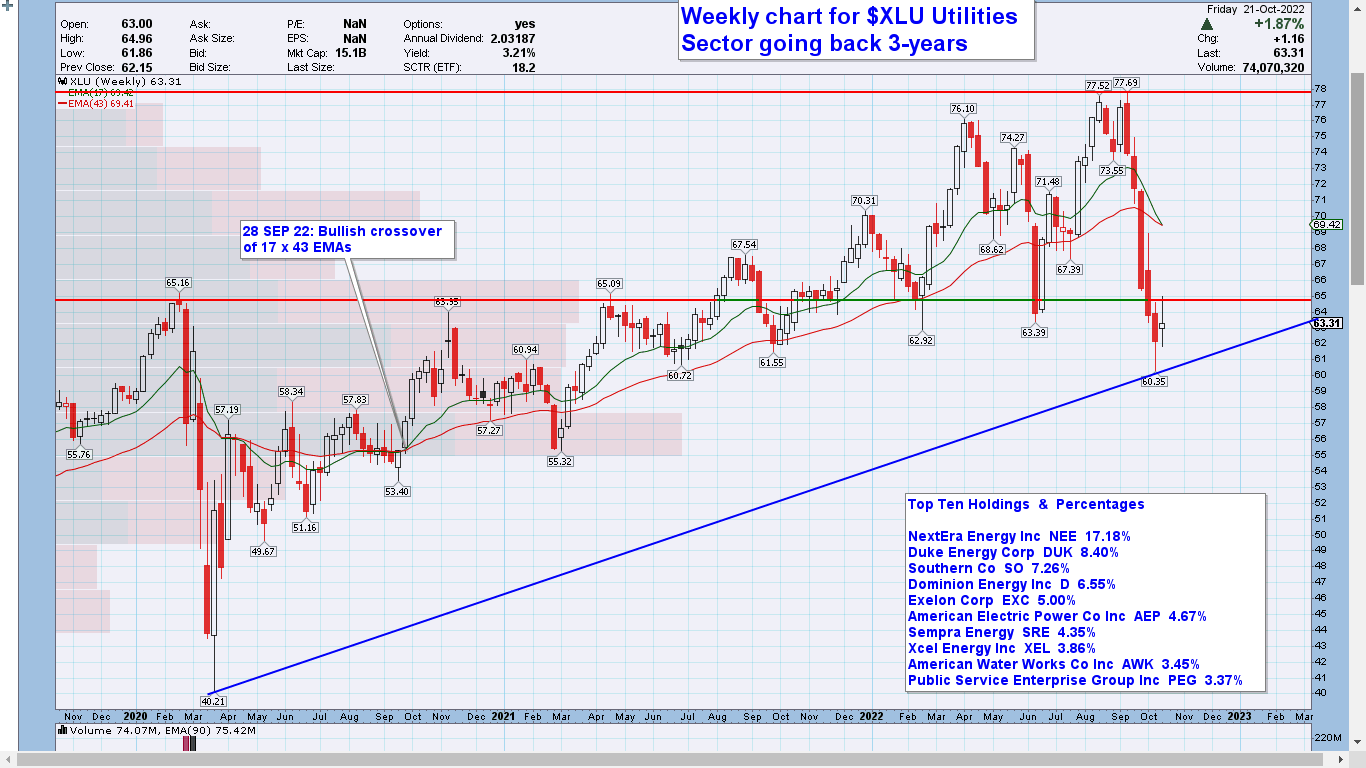 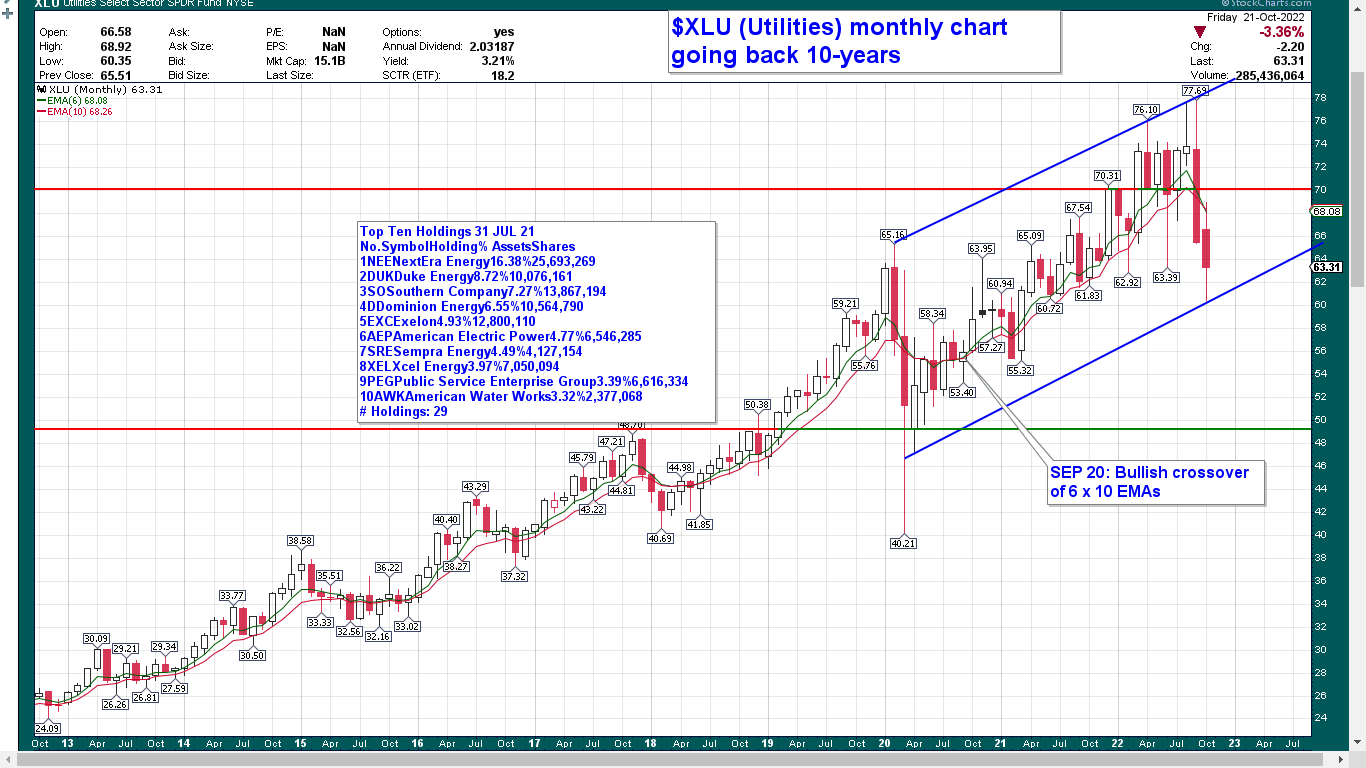 I did some Google searching (Google Knows Everything) and found some data that is helpful in quantifying just how big the the transition to EV’s might be for E-utilities. Here’s the data:

This assumes that most of the time folks will charge their vehicles at home.

So, someday in the future when nearly all vehicles are electric, an average electric utility could expect their residential electric power to almost double from what it is now.

I’d also suggest that most of the time people will be charging their vehicles at night - during non-peak power consumption. That would suggest that not a lot of new power plants (CapEx) would be needed.

For a slow growing utility, I think that would be significant.