$TSLA: Optimus, the Tesla Bot, Is Finally Here. Sorta. Well, at the Very Least It's Not a Guy in a Suit

I will cue up Peggy Lee singing “Is That All There Is?” 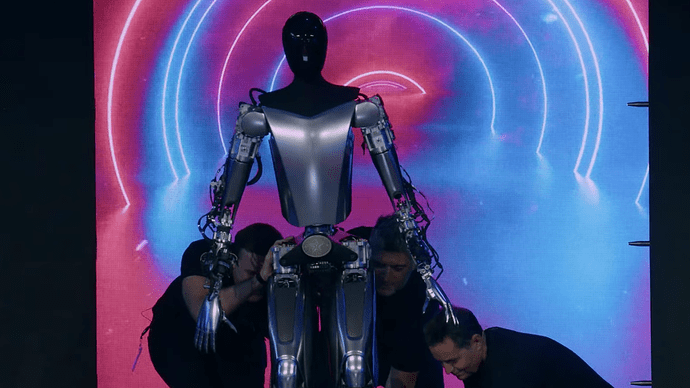 Optimus, the Tesla Bot, Is Finally Here. Sorta. Well, at the Very Least It's...

Elon Musk has finally unveiled his "humanoid" robot and it's, uh...definitely a work in progress.

A prototype of the Tesla robot has finally arrived and dear God is it just as ridiculous as we’d hoped.

If you haven’t been tracking it, Tesla has been promising to unveil a “humanoid” robot—a bipedal machine that can move, act, and behave like a person. On Friday, Tesla finally revealed its long awaited contraption, ushering it onto a stage at company headquarters in Palo Alto during its annual AI Day. Optimus (you know, like the transformer) will someday help out everyday Americans with their household chores and will be an affordable product that most people can buy, according to Tesla ad copy.

This paragraph from the OP article could have been written by Trevor Noah’s staff on The Daily Show:

The second iteration was a supposedly more developed version of the robot, with additional hardware and plating. Ironically, this advanced version could not really walk at all. To the naked eye, it looked basically like a mannequin with a stick up its b*** (the stick was to help keep its torso erect, I think). The thing drunkenly tottered around the stage, guided and supported by a chorus of worried Tesla staff, who looked at all times like they were terrified that it would face plant. 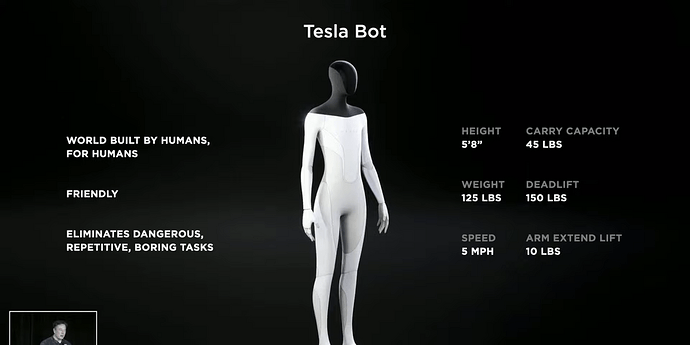 Humanoid robots are way harder than Musk seems to think

Yesterday, at the end of Tesla’s AI Day, Elon Musk introduced a concept for “Tesla Bot,” a 125 lb, 5’8" tall electromechanically actuated autonomous bipedal “general purpose” humanoid robot. By “concept,” I mean that Musk showed some illustrations and talked about his vision for the robot, which struck me as, let’s say, somewhat naïve. Based on the content of a six-minute long presentation, it seems as though Musk believes that someone (Tesla, suddenly?) should just go make an autonomous humanoid robot already—like, the technology exists, so why not do it?

To be fair, Musk did go out and do more or less much exactly that for electric cars and reusable rockets. But humanoid robots are much different, and much more complicated. With rockets, well, we already had rockets. And with electric cars, we already had cars, batteries, sensors, and the DARPA competitions to build on. I don’t say this to minimize what Musk has done with SpaceX and Tesla, but rather to emphasize that humanoid robotics is a very different challenge.

Unlike rockets or cars, humanoid robots aren’t an existing technology that needs an ambitious vision plus a team of clever people plus sustained financial investment. With humanoid robotics, there are many more problems to solve, the problems are harder, and we’re much farther away from practical solutions. Lots of very smart people have been actively working on these things for decades, and there’s still a laundry list of fundamental breakthroughs in hardware and especially software that are probably necessary to make Musk’s vision happen.