How can Tesla blame delivery miss on “logistics snarl?” This is the same company which bought a car carrier firm a few years ago to prove their “vertical integration” would speed up deliveries and fatten margins. 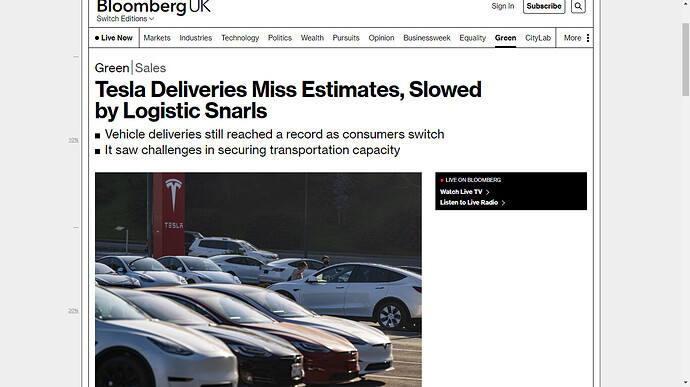 Tesla Inc. worldwide deliveries missed forecasts in the third quarter and the company warned of challenges in getting its cars to customers, suggesting that supply-chain snarls remain a blight.

It delivered a record 343,830 cars worldwide in the third quarter. Analysts had expected that nearly 358,000 vehicles would be shipped, based on the average of estimates compiled by Bloomberg.

“Historically, our delivery volumes have skewed towards the end of each quarter due to regional batch building of cars,” Austin, Texas-based Tesla said in a statement. “As our production volumes continue to grow, it is becoming increasingly challenging to secure vehicle transportation capacity and at a reasonable cost during these peak logistics weeks.” 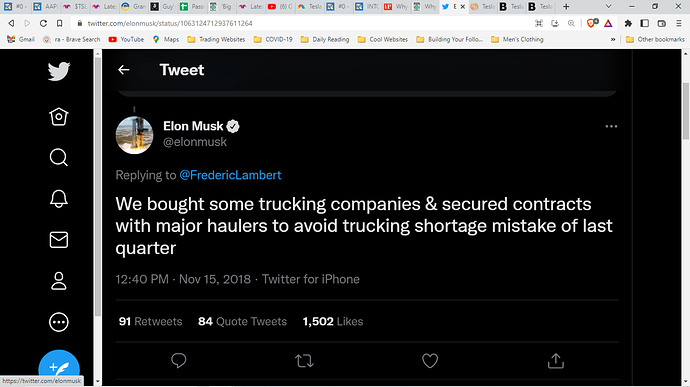 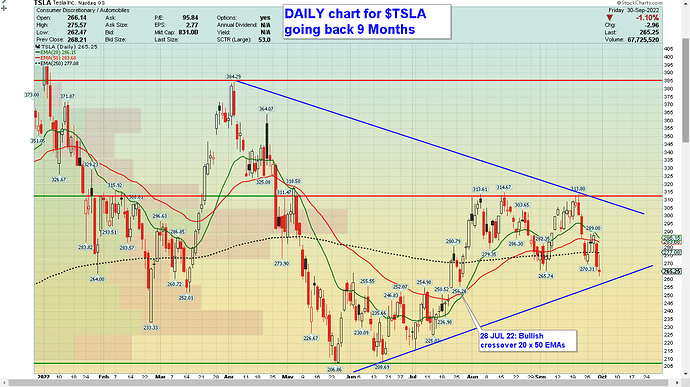 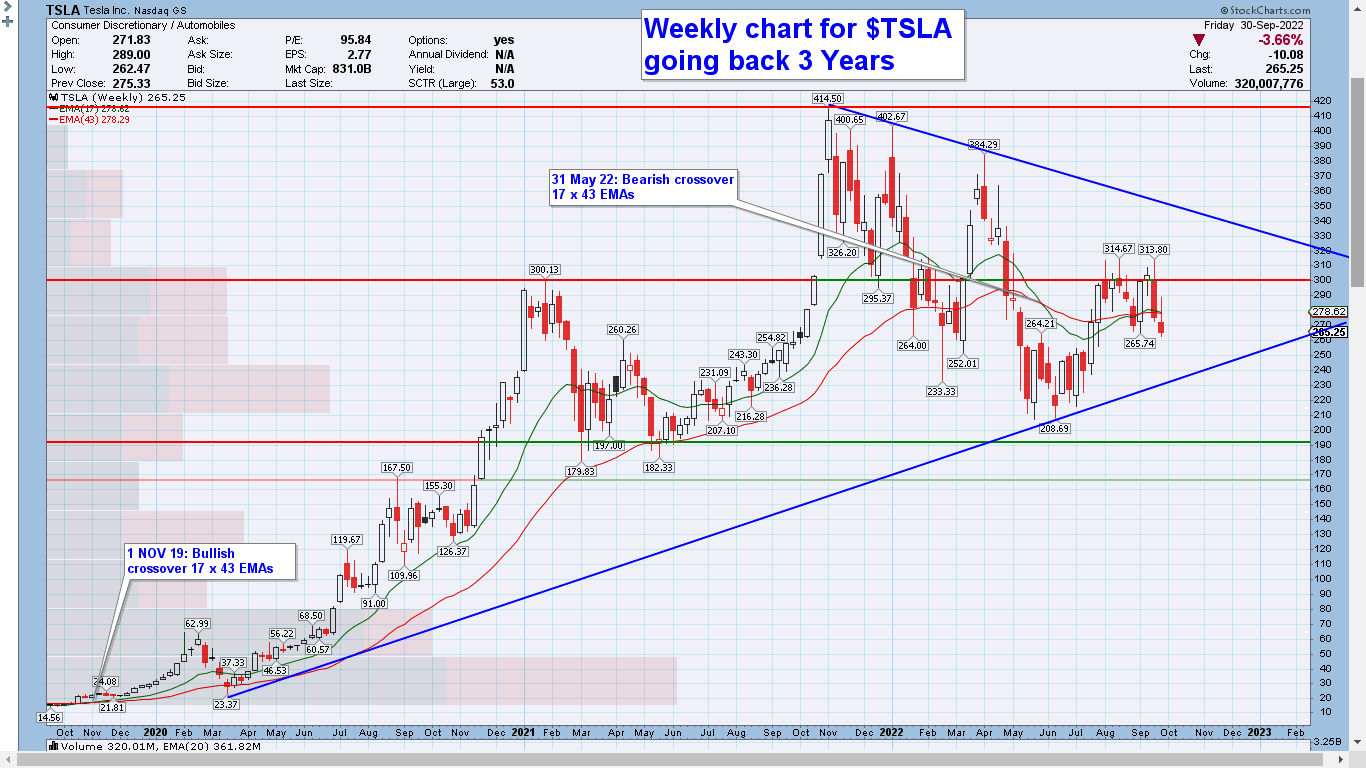 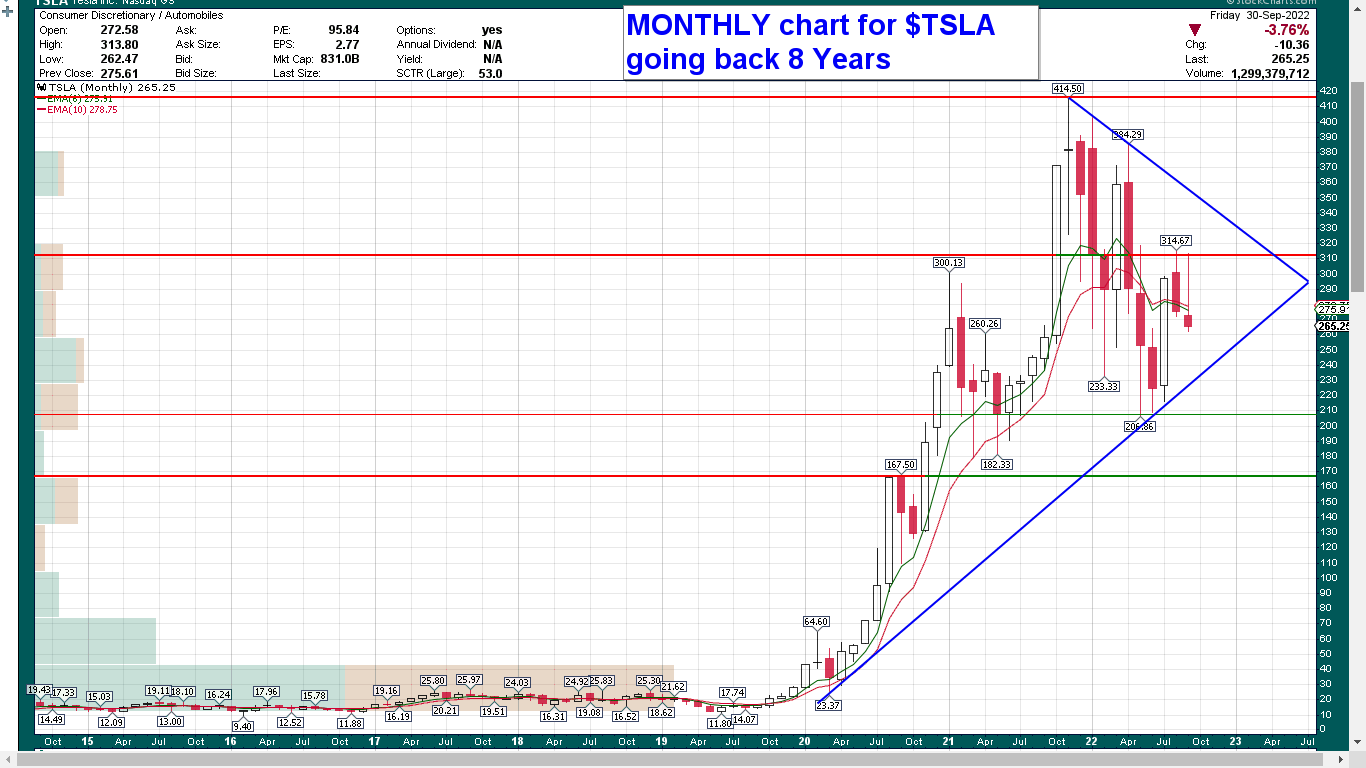 **This article from a German firm confirms the sentiment I am seeing on Twitter from people who know A/I and robots: 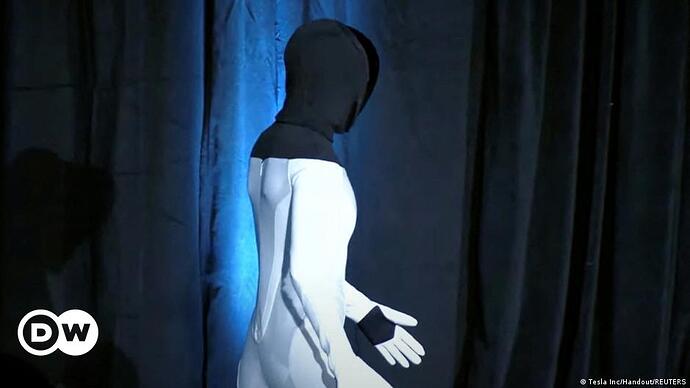 Tesla's Elon Musk has often boasted about his plan to sell millions of affordable robots to mark a "future of abundance." Critics think that future is still far off.

An early prototype of Tesla Inc.'s Optimus humanoid awkwardly walked onto the stage on Friday, while a crowd — largely made up of Tesla employees — cheered and roared. The robot waved its hand and moved its hips, seemingly dancing to the music. An advanced version of the Optimus, said to be constructed with Tesla-made parts, had to be wheeled to the stage and carried to a small podium where it waved and thrust its knee.

“The robot can actually do a lot more than we just showed you, we just didn’t want it to fall on its face,” Tesla Founder Elon Musk said at the event, justifying the caution and fuss.

If you are a $TSLA shareholder (I only trade $TSLA) keep an eye on the trendline supports on both the weekly and monthly charts. Were I long $TSLA, I’d be using those trendlines to set stop/losses. 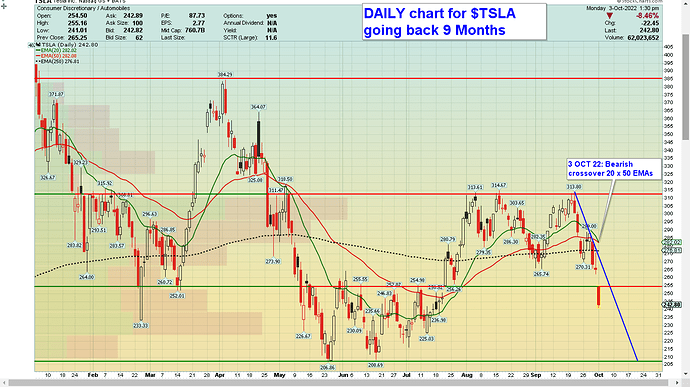 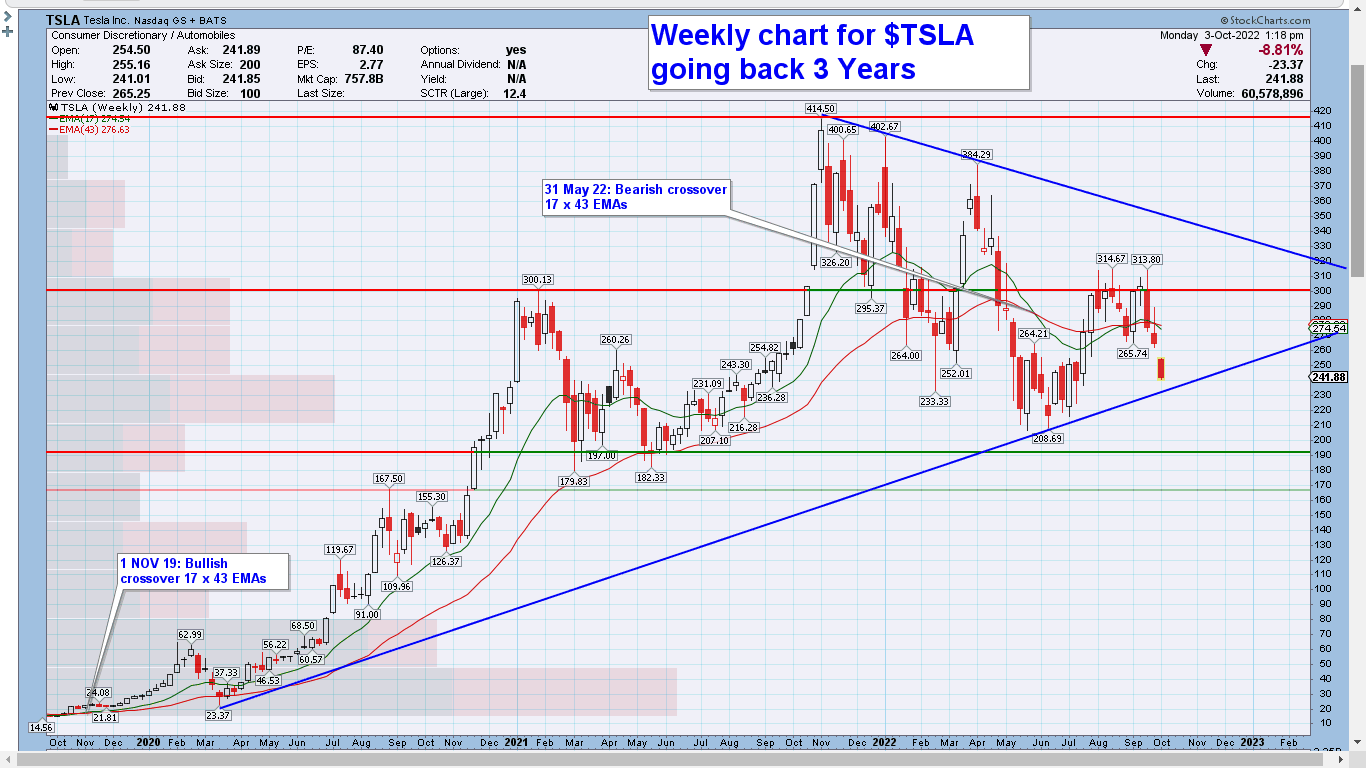 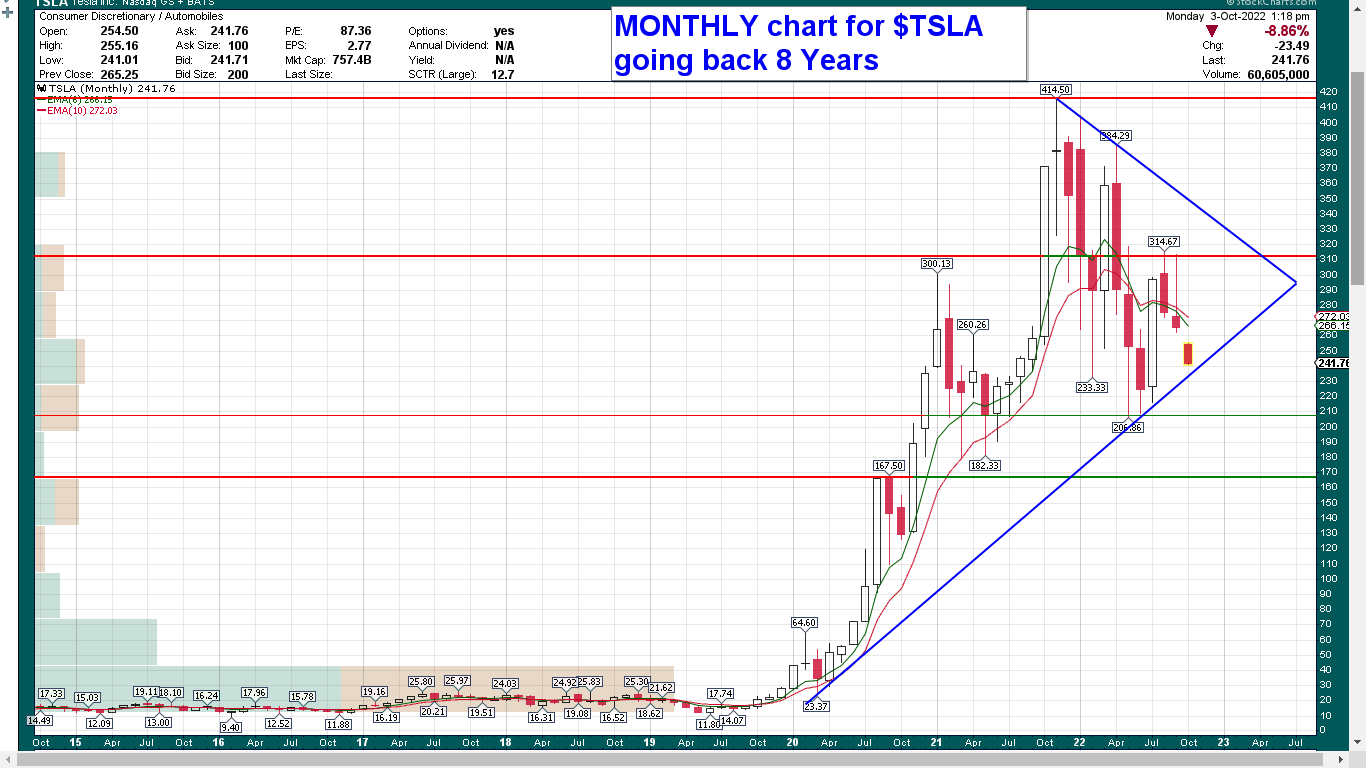 To see $TSLA charts which update in real time: 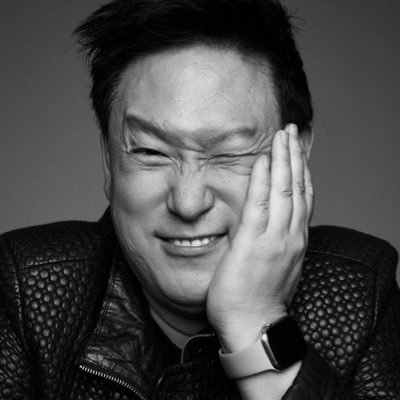 @DennisHongRobot
[My thoughts on Tesla Optimus and AI Day 2022]

A taste of Hong’s thread: 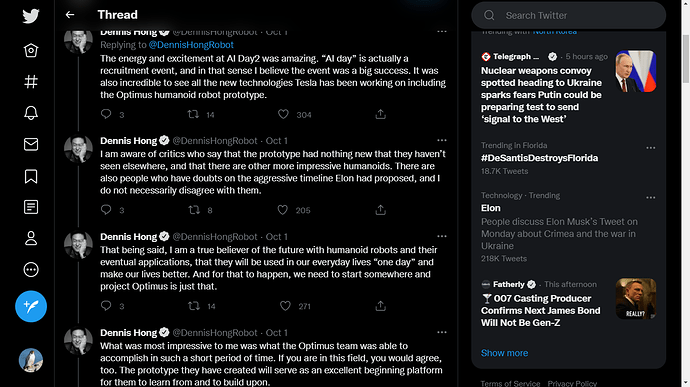