Looks like the big banks are on the hook to help Musk buy Twitter at a now obviously inflated price. Indeed, according to this story, if the debt was to be evaluated today they’d be out $500,000,000. Of course that’s sofa cushion diving change to them, but for the rest of us it could be real money. 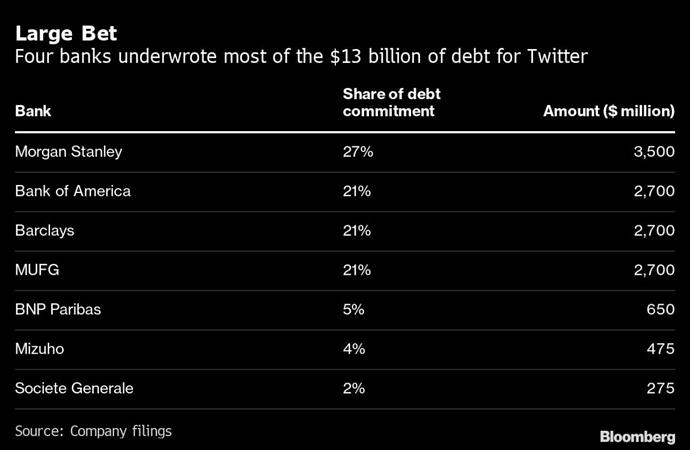 (Bloomberg) -- When banks led by Morgan Stanley agreed in April to help finance Elon Musk’s purchase of Twitter Inc., they were eager to aid an important client, the richest person in the world. Now neither Musk nor the banks have an obvious way to...

I made a bunch on it last week; I bought a few thousand shares (at $32) when TWTR was at a low, figuring if the deal cratered it couldn’t go much lower, if (somehow) the deal came together the stock would come back to $54. I really expected there to be a protracted - if shorter than usual - tussle to get Musk to accept the deal he had already accepted, and then, to everyone’s surprise, he said “OK, I’ll do it.” I got out at $50.50, leaving a few bucks on the table (“ask” at the time was $52, so I got hosed on the execution) since I had no confidence that this was the final word, given Musk’s volatility over such things.

I also have little expectation that the platform will get better; he’s already announced that banned users will be allowed to return - and with less moderation (!) - I expect in a year or two it will be a sewer of attacks, conspiracy theories, and other crap as we have seen when people are allowed to be their worst.

Anyway, good luck to the banks. Heh. As if I care.

Congrats on making a quick killing!

Meanwhile, the article is nonsense. Even in the worst case, the banks will simply make less money on the deal than they would have if they did an identical deal today. That’s not the same thing as a “loss”. And since there is no identical deal, available today or otherwise, it’s utterly nonsensical. And all that aside, to imagine that banks would commit to something that had a year to close, while the world markets were in turmoil, and didn’t protect themselves, is also ridiculous.

Unlike your profit, which is simply money in the bank. Again, congrats! It’s always nice to take away a profit from the pointless wrangling of idiots.