What's the deal with Russia?

You would have to be living on a desert island not to have heard that Russia annexed the provinces of Ukraine that it (partially) occupied during their current invasion. Equally known is that they have mobilized 300K (or whatever the real number is) men into the military, at least some (maybe more than some) of whom have no military experience and many of whom may not have received a full compliment of their gear.

The current story is that this rag-tag army is going to be used as ground lubricant as they march, unarmed, into the waiting Ukrainian guns.

So, the following is just my current opinion of what’s happening.

Putin has “established” (with possession being 9/10th of the law, despite contrary opinions) that the four provinces in question now constitute part of the Russian Federation and have the same full protection from military attack that every other part of the country has.

He has precedents that NATO, et al, is more afraid of starting another world war than of losing territories back to Russia from former Soviet states (based on South Ossetia and Crimea).

He has also shown a willingness to retaliate against attacks against “Russian soil” (including those against Crimean bases) by poking holes in building in the cities of Ukraine (such as Odessa) which are not in the battle zone, but seem, so far, to have avoided firing directly at Kiev.

So what is the purpose of the 300K recruits (probably less than 10% of what a “full” wartime mobilization could produce)? Other than being a numeric “equalizer”, they provide the equivalents of hostages. While Russia would be free to take, not only pot-shots into Ukrainian cities if their new states were attacked, but far heavier responses as well - say, strategic heavy bombers dropping conventional weapons on Kiev and Odessa. Any direct response by NATO members would risk splatting some of those humble souls and escalating the conflict.

The current Russian party line is that Russia is not just fighting Ukraine, but actually fighting the NATO nations who are supplying Ukraine with modern weaponry. That said, if Russia were to directly attack any member of NATO, they would be the first to cross the line and be termed the aggressor. On the other hand, if NATO were to come to the direct assistance of a Ukraine which was having the snot bombed out of it and assault these poor slobs in land that Russia (but few others) considers its own, that would constitute their being the aggressor.

While who started things might not sound important, it actually does matter (say, to China, India, Turkey et al) as it indicates who was willing to go “all in” and put the existence of the world on the pile of bets.

Jeff, it’s such a mess, not only the disaster Putin’s Folly has created, lost lives, lost futures, most of us cannot imagine the day to day conditions in Ukraine, much less in the cities, towns destroyed by his undisciplined horde he calls an army… War Crimes in about every instance… Disrupting trade in so many ways, Erope as a whole is already paying serious prices, likely more to come.

at one time I wanted to go to Poland, visit the Krakow are where my maternal great grandparents were from, I’ve met young. tech savvy Polish folks at our earlier MacWorld Faire’s nearby in SF, telling me to come on over, get to know the country, but now, I just can’t see it… We did do with the Viking Grande European (Amsterdam to Budapest) and the Russian (St Petersburg-Moscow) river cruises, met, saw so many beautiful places, people, but now, I doubt we’ll ever be as comfortable as we were then… In Russia we got to know our Guide, actually a teacher in St Petersburg, Tatiana, very open to any topic from history or her personal life, it’s sad to think how she must be feeling about the situation. the other guides, all so helpful, glad to share their knowledge, culture with us… I gain, cannot imagine what is happening in Ukraine, What nation is next, etc… There is evil in Moscow… Bit many, many good people, if only they can overcome this mess…

Putin overplayed his hand the minute he started the war, although he didn’t know it at the time and most others didn’t either. But it was clear after he failed to take Kiev and had to reset the objectives that he had pretty much lost the war. After the reset, Russia was only able to capture smally amounts of territory by expending huge amounts of ammunition, equipment, and soldiers. By July, Russia was no longer able to advance in any meaningful way.

I believe this is a big, big mistake. Military strategists have known since at least WWI and probably since the American Civil War that massed infantry charges are ineffective. Tactics, equipment, and training trump sheer numbers. Strength over length, if I may butcher a Bridge saying. We saw recently at Izyium and now at Lyman that motivated, tactically coordinated Ukrainian troops can defeat superior Russian numbers. Masses of poorly equipped, poorly trained, and poorly motivated soldiers are likely to be a bigger liability than they are an asset, and could crack under the stress of battle. And they are arriving just in time for winter. Putin seems to be pulling a General Frost on himself.

I don’t know how exactly this will end, but it won’t end well for Putin.

Russia’s economy is now entering hyper inflation. It has to as Putin prints.

but the Russia economy will end this and end Putin.

The other worries expressed are not that important.

Putin knows zero about economics. He has never managed in any regard the Russian economy. He has committed theft. He has to endlessly print for the abbreviated end of his life.

Where did you get the data about Russian inflation? The Ruble has been surprisingly steady against the US dollar. There have (interestingly) been no sanctions against Russian gold sales and I suspect the dropping price of gold has been a function of Russian sales. While Putin may or may not understand economics, he has a number of apparently very adept monetary managers who are protecting Russia from most of the financial damage that the sanctions were supposed to inflict.

Maybe this is bad… but I just had a vision of Putin giving the “fire” order on a nuke, and someone in the control room had it’s destination programmed for the Kremlin

The big data point was three weeks ago or so when the Russians stopped supplying Western Europe with NG. At that point publications like the NYTs were reporting the Kremlin was running in the red as the taxes on NG evaporated starting in September.

It is my simple understanding of econ that the Kremlin, Putin has to turn to printing money to keep the war effort going.

The gold sales are not enough to matter much. The oil and NG are the two big items. The sabotaging of the pipeline was another bad move. Note I took out the word stupid, you get that by now.

An important development: Russia forces at Lyman were either encircled and trapped or retreated, depending on the source. The Ukrainian Ministry of Defense said that virtually all Russians were captured or killed. I’m not aware of any independent confirmation of that, but there is enough evidence on social media to be sure that Russia took one on the nose.

This is a major tactic and strategic loss for Russia. At least in the east, Russia can no longer defend its major logistics centers against determined Ukrainian forces. Russian social media and milbloggers are in full meltdown mode. Accusations are flying everywhere.

It’s very believable. I was following discussion on a Ukrainian forum yesterday and it appears the Russians at Lyman were in big trouble particularly because of three factors. First, major commitment by the Ukranians (around 5-10x the force size of the Russians) and secondly, they were successful in totally encircling the Russians. Third, supposedly the RU troops in Lyman weren’t allowed to leave by their commanders days ago, because a withdrawal right as Putin was making his speech & claiming territory would not have been a great look. In the meantime Ukraine merrily took out bridges to stop vehicles escaping. Basically Russian troops got wrecked (again) by Putin’s ego, and by Ukrainian will & competence (& allies :-)).

The good news is that loss of life is likely far less than if the situation were reversed. 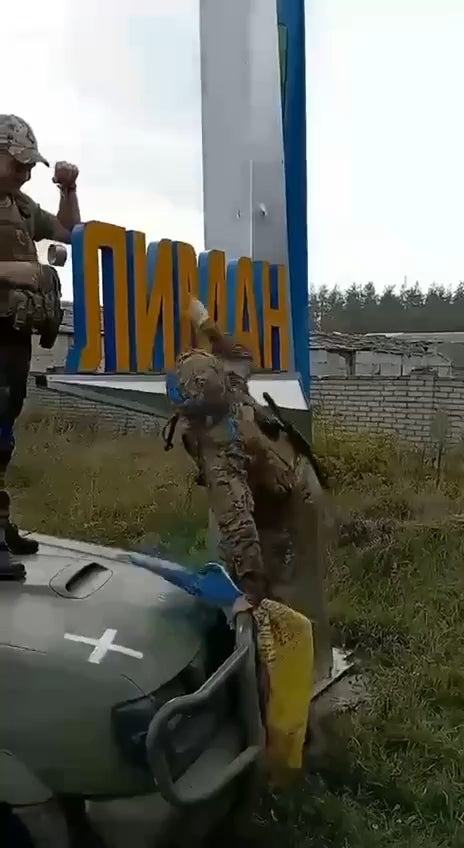 5 hours ago, in Lyman celebrating victory: 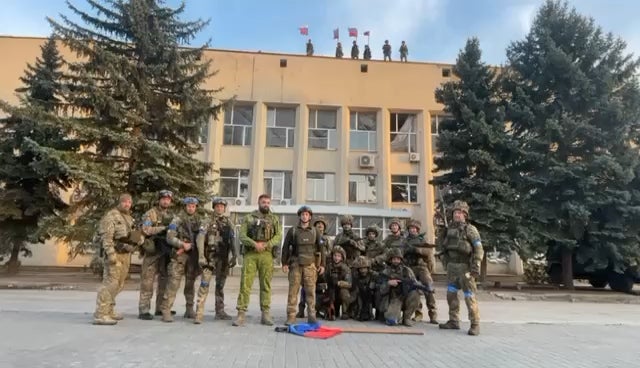 Here’s a video of the loudspeakers playing high volume around the area instructing the Russians on how & why to surrender peacefully. 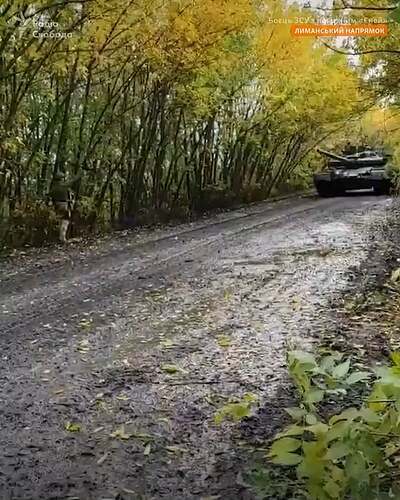 Seems a column of Russia vehicles fleeing Lyman encountered a bridge taken down by Ukraine, RU troops abandoned their vehicles and ran. Lots of new toys for Ukraine to play with.

r/ukraine - The same column that fled Lyman Yesterday. Seems they didn't all... 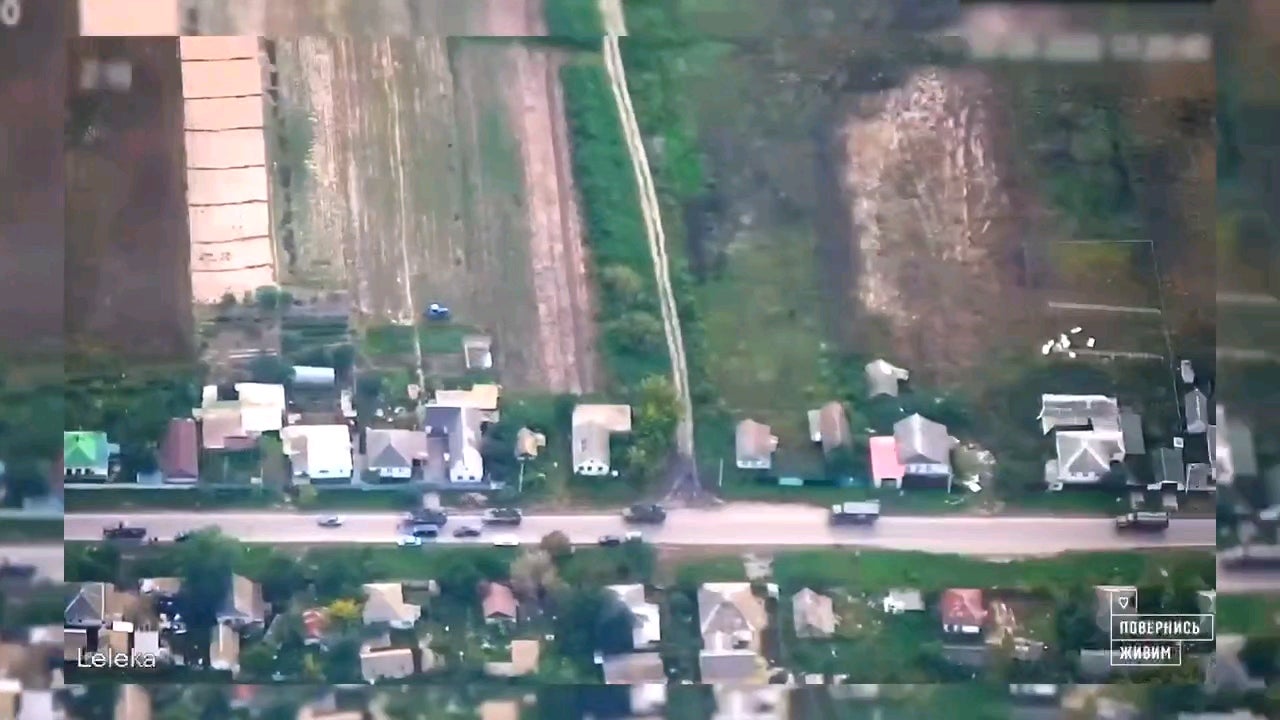 Overall, another massive victory for Ukraine. 5000 RU troops shredded or captured in a day. Looks like 1500 dead so: 3500 captured or escaped?

What absolute champions the Ukrainians are.