I see very clear sailing for the next two years. After that things are muddier. With both the Xilinx and Pensando acquisitions they are filling out the product portfolio. I predict another acquisition in ML/AI and perhaps something in software.
Alan

Just so we all know about these new boards, I can only like the last post in a thread. Sigh…

I have to say I feel like the change in discussion board format may kill the AMD board-- and many other lively boards. (Although honestly I don’t know how many particularly lively boards there are.) This experience is so awkward…

PS - I’m liking my new Lenovo so far, but the fan(s) kick in for no apparent reason even when running next to nothing that should make that happen. It’s not terribly loud, and I’m even getting used to it, but it just shouldn’t be happening. Been trying to find some way of controlling it better but so far coming up short. Updating the BIOS was supposed to help, but I did that, and I don’t think it did much. What’s the best way to control fan speed? Also, my Logitech USB connected wireless keyboard/mouse combo lost connection after one day in the middle of the day while I was typing. That had never happened before with my trusty 6 year old Dell Inspiron 15-7579, so I’m inclined to blame the port or the driver rather than the USB transmitter.

After reporting it, it now works. But I still cannot change my email address following their instructions. We sold our house near Yosemite and it is in 4% CDs as my wife is extremely cautious.

maybe you can underclock to lower temperatures?
https://ryzencontroller.com/ does this help?

How do I Undervolt My Laptop for Maximum Efficiency? | Technize also an interesting read

Interesting. Lower the CPU voltage, lower the CPU temperature and extend the battery life, all while maintaining the same performance? Seems like free lunch! I guess the catch is that it’s not manufacturer sanctioned. I’ll have to explore this more and see if I have the nerve to try it. Still though, doing this should NOT be necessary. My thought is that the BIOS has it’s settings to control fan speed dependent on temperature set to try to make the temp unnecessarily low at all times. There’s supposed to be a way to tweak this in the BIOS in he boot menu, which I’ll look at first since I feel it gives me a safer option.

I’d like to first find a utility that will simply display the operating temps of the the CPU, external GPU and SSD, along with the fan speeds (there are two in the IdeaPad, with two heat pipes). Being able to tweak the ranges that the fans turn on and off would be a nice additional feature. 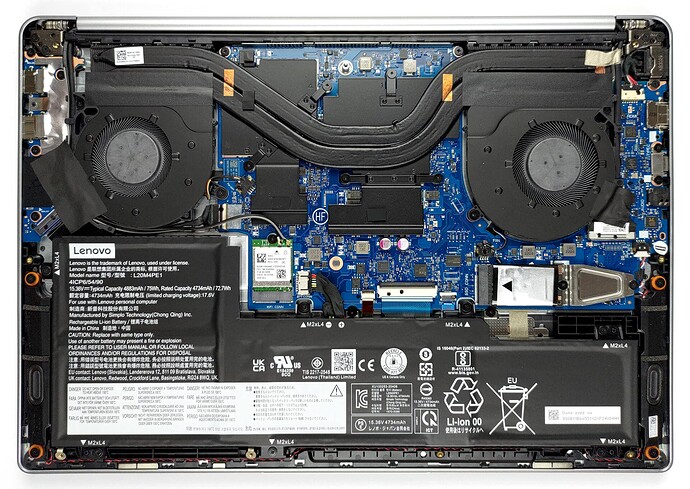 only if you’re routinely throttling, I would think.

So, I tried a bunch of hardware monitoring tools and they all agree that the CPU is running at about 36 degrees C and the GPU is 33 degrees C. From what I understand, this is LOW! The fans should have no need to be turning on at all. And yet as I type this, they are running and not stopping. There has got to be fix for this.

The fans always running explains why it is so cool:-) Perhaps there is a BIOS upgrade that will fix this as it shouldn’t be doing that. My Intel based system comes with a thermal control panel where I can change power and noise settings. Perhaps your system has a similar tool if you can find it.
Alan

Yeah. I haven’t found such a tool yet. There’s something called ThinkPad Fan Controller (Thinkpad Fan Controller (tpfancontrol) download | SourceForge.net), which seems like it might be what I want, but it might not work for the IdeaPad line. It also hasn’t been updated since the end of 2015.

PS - I was misreading the CPU temp in the tools and was looking at the min temp. The usual temp seems to be around 40 degrees C. Below that, no fans run, and if it gets much above that for a few minutes the fans kick in. I’d like to change that rule to have the fans only kick in at about 50 degrees C. Maybe there’s a BIOS setting…

Well, it looks like I’m screwed. There’s no tweaking for the fans available at all in the BIOS. There’s a “power mode” setting to select “Extreme Performance”, “Intelligent Cooling” or “Battery Saving”, but those are also selectable using the “Lenovo Advantage” app. It’s set to intelligent cooling now, but obviously it’s not that intelligent. Setting it to battery saving dims the screen but does not seem to affect the fans at all - they still rev up at a CPU temp of 35 degrees or so. I REALLY don’t want to go through the hassle of returning this thing!

I use a program called A-Tuning which comes from ASRock who made my motherboard: ASRock Motherboard Utility 3.0.416 Download | TechSpot You may have to find the manufacturer of your laptop’s motherboard. It may be made to order for the ODM or OEM of your system, but there are really only a few motherboard designs for a given generation of AMD or Intel CPUs. There are even fewer BIOS makers and designs. For Ryzen CPUs AMD provides AGESA software which is the basic BIOS.software for all AMD CPUs so most fan control programs will work. The problem–well not really a problem–is that if you have an nVidia GPU with a built in fan or fans, you need to run the nVidia software along with the software to run CPU and motherboard fans.

Hmm, from Wikipedia, " AMD Generic Encapsulated Software Architecture (AGESA ) is a procedure library developed by Advanced Micro Devices (AMD), used to perform the Platform Initialization (PI) on mainboards using their AMD64 architecture. As part of the BIOS of such mainboards, AGESA is responsible for the initialization of the CPU cores, chipset, main memory, and the HyperTransport controller."

And I guess that means that whatever motherboard I have in my laptop it will be using AGESA. Does it control fans? I would think not. As for what motherboard I have, it seems to be a “Lenovo special”. From the info provided by the excellent HWiNFO program

Also, NO software I’ve tried has even been able to SEE the fans or their revs, let alone be able to modify them. I read somewhere that it can depend on how the fans are connected to the motherboard?

Try Lenovo Vantage - Using your PC just got easier - Lenovo Support US I found it by searching for the Lenovo motherboard model number you quoted. (Didn’t want to install the software on my system to check it out.)

Lenovo Vantage was pre-installed, and I had looked at it, but it doesn’t provide any low level stuff. The only things related to power are similar to what Win 11 power management settings already provides. Example: 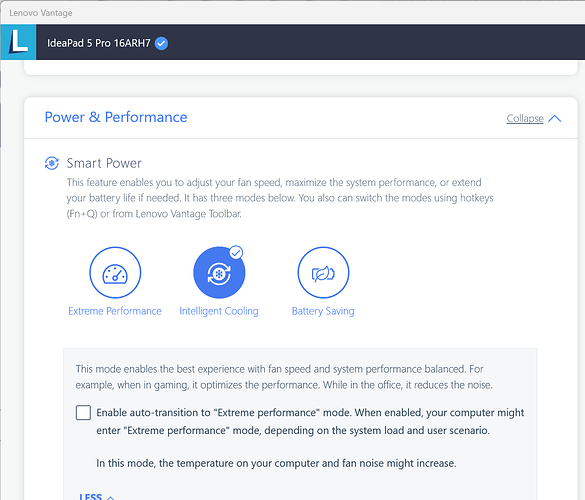 Perhaps one other thing to look at is the apps you have loaded. I have found there are a few I have that result in the fans running all the time even though it doesn’t seem like the system should be doing extra work. When I close these apps out, the system quiets down. Particularly, games that I purchased through steam.
Best of luck with this and HAPPY Holidays to all,
Alan

[ Didn’t really want this thread to become a “help with this stupid computer” topic, but just one more… ]

I intend to remove the McAfee virus protection app, which I did find was using some resources, and was in fact raising the CPU core temp the few degrees necessary to trigger the fans. But the fans being triggered at such a low CPU temp is still the ultimate problem here!

PS - the setting below shown did nothing that I could tell either (note that only the Balanced plan/scheme is available - which is yet another thing I’ve been trying to find a solution for - and enabling the system cooling policy to show up was only available via a registry tweak): 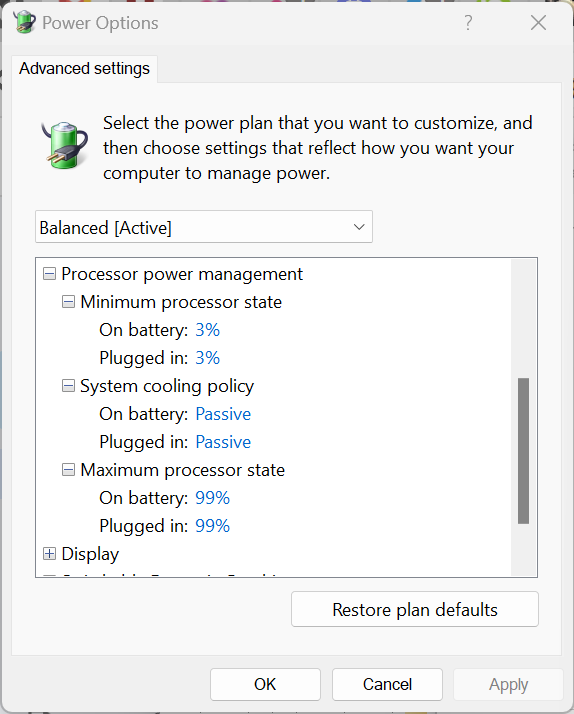