Mark Moss on why Musk really bought Twitter. The first few minutes are really PITA but when he finally gets into the subject, it becomes quite interesting. The link starts at minute 6:35 to skip what might be controversial

The REAL Reason Musk Bought Twitter Is SO MUCH BIGGER

Captain thank you this is a very timely analysis.

This is using Social Media for Web3.

Cathie Wood is thinking along the same lines

ARK Invest CEO Cathie Wood is bullish on Elon Musk’s Twitter (NYSE:TWTR) takeover, with the high-profile innovation investor arguing that the CEO of Tesla (TSLA) could turn the social media app into his planned "super app.”

A super app is the concept of an all-in-one platform where users can leverage one centralized application for multiple uses. Such an offering could include instant messaging, e-commerce, payment transfers, general banking and many other potential areas of business and social interaction. 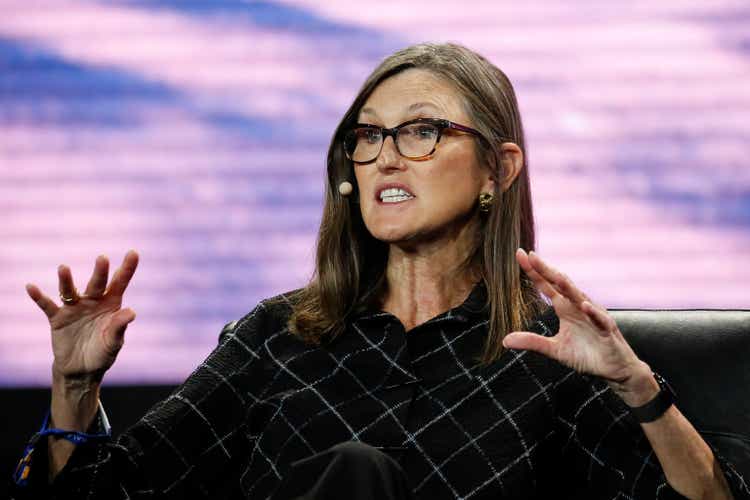 CEO and CIO of ARK Invest Cathie Wood is bullish on Elon Musk’s Twitter (TWTR) takeover as she stated that the CEO of Tesla (TSLA) could turn the social media app into a “super app.”

I would love a way to transfer money without the SWIFT banking fees.

AARK is down 70% over the last year. I put Wood’s credibility about the same.

Personally, I’d go out of my way to spend more to avoid giving a penny to Musk.

Oh, and Cathie Wood bought a private stake in Twitter. No conflict there.

That pretty much sums up my thoughts on this fiasco.

This is using Social Media for Web3.

Web3 (also known as Web 3.0 is an idea for a new iteration of the World Wide Web which incorporates concepts such as decentralization, blockchain technologies, and token-based economics. Some technologists and journalists have contrasted it with Web 2.0, wherein they say data and content are centralized in a small group of companies sometimes referred to as “Big Tech”. The term “Web3” was coined in 2014 by Ethereum co-founder Gavin Wood, and the idea gained interest in 2021 from cryptocurrency enthusiasts, large technology companies, and venture capital firms.

I have my doubts about “decentralization.” Big money can co-opt just about everything. After the initial euphoria with blogs able to take on the mainstream media [an early effort to “decentralize” ] we have seen how social media was able to sideline many if not most blogs. Every media owner thinks he has a god given right to allow only ‘proper speech.’

My option is to try to play the hand we have been dealt as best I can in my own interest. If I seem cynical at times is because I simply do not trust Big Brother, any Big Brother, Left, Right, or Center. With Musk I hope he lives up to his promise to be a free speech fanatic. The establishment is capable of crushing most rebels.

Captain thank you this is a very timely analysis.

I have my doubts about “decentralization.” Big money can co-opt just about everything.

It is not that very big companies wont take part. It is that anyone can jump in with some resources and play a role in a more significant way.

I will give you an example in the NFT world. When an NFT is minted it is in a gallery if you will. Any platform selling NFTs, the platform is a window like the other platforms. When the NFT is sold it is no longer in the gallery or the windows. It goes to someone’s wallet. To be sold again it is placed in the gallery.

The gallery is the blockchain.

That entire video should have been about four minutes. However, I watched it so you don’t have to. Here’s the jist:

Back in the day, Paypay co-creater and all around jerk Peter Thiel predicted that someday payments would be made on mobile phones bypassing banks. The host claims Elon Musk (also a Paypal co-creator) bought Twitter to create a platform to make payments on mobile phones using Bitcoin and the Lightning network, which appeals to various tech guys’ libertarian sensibilities. The “smart money” sees this and has driven up Twitter’s stock price which tech stocks in general have fallen. That’s pretty much it.

A couple things the host didn’t mention: There is already a way to make payments on your mobile phone bypassing banks. It is called M-Pesa and it is popular in the third world where banking infrastructure is not well developed. Faster and cheaper than Bitcoin.

An inherent problem with Bitcoin transactions is that the entire network can only process about five transactions a second. That’s probably not fast enough for a shopping mall, much less the entire world. A work around is to process the transactions off the chain with a separate network. In this case, Lightning. Several problems with this. One is that the raison d’etre for Bitcoin is that it is a decentralized, trustless, system. The Lightning network is centralized and requires trust which invalidates the whole point of using Bitcoin in the first place. On top of that, Lightning has security vulnerabilities and other features that make it challenging for widespread adoption. But it can be done. El Salvador’s Chivo app uses Lightning to conduct Bitcoin transactions off chain. But again, using government software for transactions is not very libertarian and despite government subsidies Chivo use has not gained much adoption.

Next he speculates the “smart money” sees all this and that’s what’s driving the stock price. That is incorrect. Musk’s buyout offer was higher than stock price at the time. So when it looked like the deal would go through, the retail stock price jumped up close to the buyout price.

Finally, I’m trying to figure out what problem this is supposed to solve. Except for perhaps specialized cases like the captain’s, making payments are fast, cheap, and easy on a number of platforms already.

Next he speculates the “smart money” sees all this and that’s what’s driving the stock price. That is incorrect. Musk’s buyout offer was higher than stock price at the time. So when it looked like the deal would go through, the retail stock price jumped up close to the buyout price.

First, thank you for the summary. I prefer a quick read to slogging through somebody’s uh, sloggy if enthusiastic video.

Second, minor quibble; Musk announced his purchase of Twitter just as the market for such things was peaking. Then he over-bid to make sure it would scare off any other poirtential buyers. It sure did. Ha! It even scared him off until he realized he’d signed a binding contract and the company was holding him to it and the judge wasn’t putting up with his foolishness.

Still it could turn out well for him, if he manages to slash the staff (already in progress), improve the product (um, how?), find new revenue streams ($8/mo from a few users?), invent new apps (refer back to: slash the staff), and so on.

I will note that it is going to take a LOT of his time away from his other ventures, which might not turn out to be the best idea he’s had.

Many banks waive the wire (SWIFT) transfer fee based on the size of your relationship. If you are paying a fee, you might inquire if you can get it waived if you had a slightly larger deposit balance (or were just in the correct type of account).

Still it could turn out well for him, if he manages to slash the staff (already in progress), improve the product (um, how?), find new revenue streams ($8/mo from a few users?), invent new apps (refer back to: slash the staff), and so on

Seems like in hindsight, it might have been easier and cheaper to have built such a company from scratch than to buy one for $54 billion - that also includes $18 billion in corporate debt.

I will give you an example in the NFT world.

I understood every word you wrote but I’m still entirely clueless about the NFT world.

Rule #1 in investing, buy only what you understand.

My ‘relationship’ with banks is as small as possible!

Thanks for the advice. I generally dislike banks and use them as little as possible. My current bank is pretty good, an online bank, subsidiary of a larger commercial bank. They don’t charge me any fees except for transferring money in and out which I do very seldom. When I transfer money from by brokerage account it’s a large sum and the fee as a percentage is small. My condominium payments happen less than once a year so it’s not something worth worrying about. Were it on a more regular basis I would look for better solutions.

Seems like in hindsight, it might have been easier and cheaper to have built such a company from scratch than to buy one for $54 billion - that also includes $18 billion in corporate debt.

The motivation to buy Twitter was not to have a new platform, it really was about free speech.

But once he has Twitter, he has to make it profitable.

If you really think this was about ‘free speech’; I have an orange farm in Antarctica available for sale!

You know how you can’t turn away from a train wreck that’s about to happen because the carnage and destruction is both awesome and a terrible waste? Musk and Twitter is like that.

I would point out that bypassing the SWIFT system in order to transfer funds flies directly against the national interests of the US government and there may be significant push-back.

When it comes to money Uncle Sam is not a nice 800 pound gorilla. Uncle Sam’s principal ‘national interest’ is the defense of the dollar’s world wide reserve currency status.

The motivation to buy Twitter was not to have a new platform, it really was about free speech.

Chuckle And Bezos bought the Washington Post to protect free speech too.

The irony in this is the fact that one of the first things Musk did as owner of Twitter was to post a completely false story about Nancy Pelosi’s husband fighting with a gay prostitute. Yay for free speech!?!

Interesting coincidence that Musk purchased the one company that had previously cost him millions in fines and punitive federal regulation due to his prior “free speech.”

If you’re selling NFTs, or really just about anything, you should use all sales channels that are cost effective. There’s no need to choose only one of the social media platforms. There are even tools out there that allow the simultaneous use of all the major social media platforms. Remember, when you’re selling an NFT, you need one buyer for it, and it doesn’t make much of a difference if they discovered it on twitter or on insta. A sale is a sale is a sale.