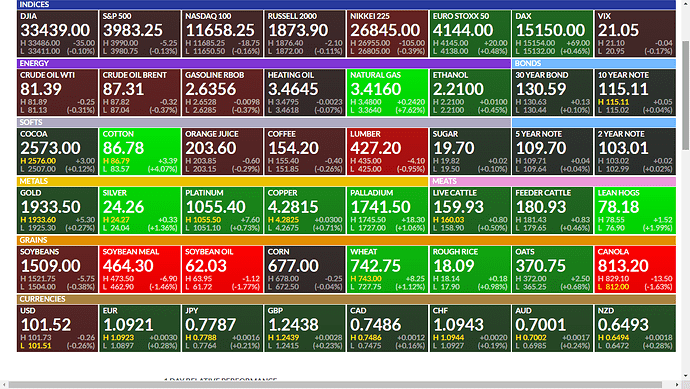 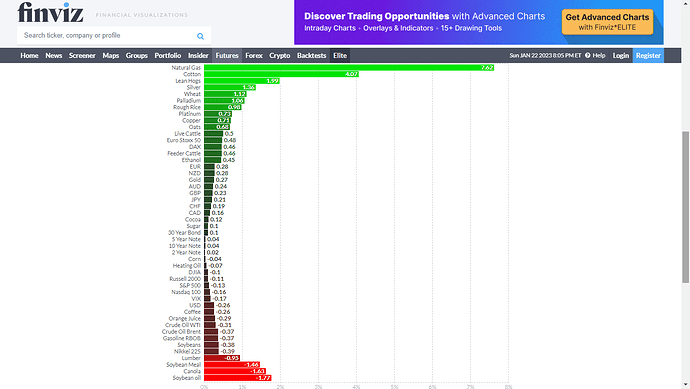 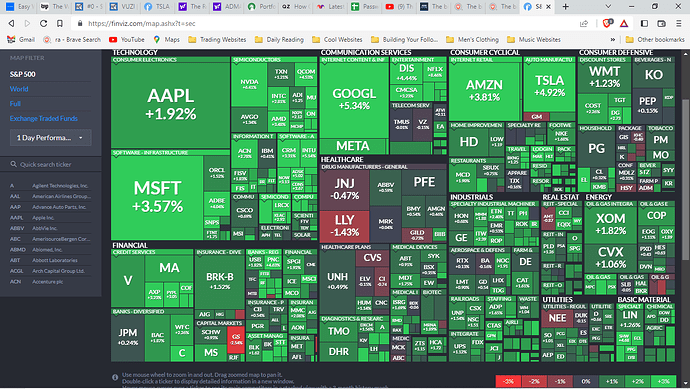 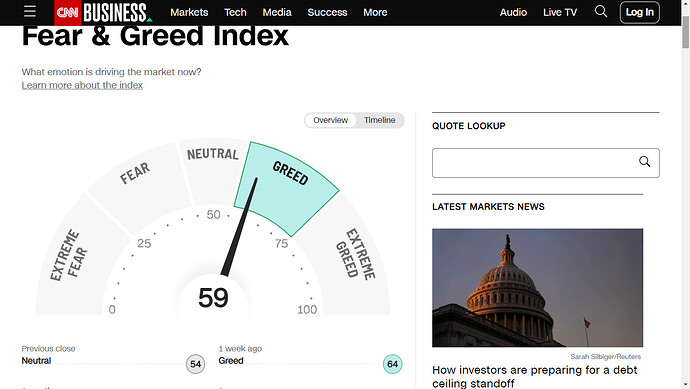 What are you doing when you look at the heat map?

It’s my quick look at which sectors are rocking. A green forest like Friday shows everything - all 11 sectors - had good days.

Then I drill down to see which squares and rectangles are bigger (which tells us if it is a Big Cap, Mid-Cap, and Small-Cap stocks from the US Exchanges) and what might be holding back the S&P 500, or, making the S&P 500 fall/rise more because a stock - say $TSLA or $AMZN or $GOOGL had indordinate pull on the markets.

This gave me a heads up to play more biotechs.

A heat map looks at the last trading day when its static. But during a day, I check out the heat map I get from stockcharts to see what is moving, what is not. It helps me “hold” swing trades if I see it’s sector rotations into stocks I’m playing.

I prefer the finviz heatmap over stockcharts, but that might be changing soon with all the new features stockcharts is adding. So many changes there I can’t even study them all.

If you click on the next link, the heat map allows you to run your cursor over every name on the heatmap and tell you the loss/gain for the day.

I punch in LLY into the Finviz search tool to see why this big, well-known name is down.

Then the list of news stories come up and the one which stands out like a blind cobbler’s thumbs are this: 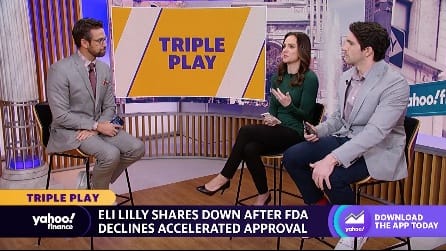 Okay, during the day, I could surf Bloomberg, WSJ, CNBC for headline breaking news and have to sort through a bunch of headlines not related to LLY, or, the heatmap tells me in a micro-second: “Go investigate $LLY now.”

A heatmap is visuals for us folks who respond better to charting than F/A.

It’s like I do things arse-backwards when I go into bars to help them reach potential with DJ/marketing skills, always using the Scientific Method to form questions needing to be asked, but which bar owners don’t pay enough heed to.

Here’s a tip about failing bars:

When I arrive, the first person I want to meet is not the managers. I want to meet the barbacks and have them walk me into the storage room, the walk-in refrigerator, and always keeping an eye out for a very simple clipboard with typed out spreadsheets for every liquor or beer. Usually, within 3 minutes, I can tell if booze is being given away or stolen, just by looking at “Par Sheets.”

The easiest turnaround ever was a place I did not work. My friend calls me. Just promoted to management. Asked me, “Rock, have you ever seen a liquor room with no Par Sheets?”

When he asked me that question, I knew exactly what he could do first: fire the barback who could not be bothered enough to put pen to paper because he was giving away more booze than he sold on his dayshifts when he bartended. It played out exactly as I predicted. My friend had two “entertainers” keep an eye on Mr. “Free Patron Shots for All Entertainers” (10 women on, drinking free Patron, can kill a bottle in no time.)

There’s a guy on this very board who knows more about barbacking than anyone in Key West, except for maybe Luke the Lithuanian Liquidator, my last barback at the last club I worked. (I think the most valuable person in most bars is a top notch barback, a barback with a conscience.) This Fool I am telling you about, were I to open a bar or take over a failing one, would be the guy I’d call first to have him just do a proper walk-through.

It’s like this: the two best barbacks that owners listened to in Key West, also worked at the two most profitable clubs in town per sq. foot. These two guys know when theft is taking place, when over-serving is a problem, when skunk beer is being served, when to buy “all in” for a year’s worth of one liquor., etc.

I daresay, other than bartenders tipping out 20% every night to their barbacks, your barback - a very sharp one - is worth paying more than even your entertainers. I don’t say that lightly.

A barback has his own “heat map” indelibly stamped on his frontal lobes which tells him, “Okay, Boss, this promotion for buy one case, get one free of say Tito’s Vodka” (believe it or not, I can remember when Tito’s entered our bar with that promotion) and after one week the barback convinced the owner to buy 50 cases of Titos because his internal heat map showed this new Vodka was outselling Stoli, Absolut, etc, combined.

I daresay the best barbacks in Key West are going to save their salary and a whole lot more when they see sketchy things happening on his “maps” in the storage room. Or they urge you to go all in on the next Tito’s. (The guy who invented Tito’s Vodka was a regular at our bar when he vacationed in Key West. Luke had ingratiated this tiny bar into the Tito owner’s internal bar heat map. What was this tiny bar in Key West doing right? Tito’s owner had to know.)

A great barback is progressive in rotating stock, meaning, you don’t put April Beer on top of January Beer in your coolers. Every week, a great barback will spend one end of night rotating stock in the coolers. Pain in the arse, slows down a closeup, but that’s why you want a conscientuous human running that back room.

All things being equal, you could open two indentical bars side by side. The one with the better barback has the better chance of surviving.

Show me an orderly stock room and walk-in fridge and I’ll show you one of the best minds on property behind that order.

My old friend on this board? The guy was second barback at my old bar I deejayed. The owner put his faith in the wrong guy, a guy who smoked crack, as his No. 1 barback. My friend here saw this and tried to warn a manager/partner. The imbecile coke smoker in charge of our storage room was sitting on explosive news that the bar was giving away more booze than any bar I ever worked.

Of course, a big problem there was the bar was named after this wildman partner who drank more than the customers. (Our entire staff followed his lead.) His motto was “Alcohol is the Key to getting anyone to talk.”

That one owner, who I loved very much because he and I had the best Liberal/Conservative arguments which would upset people around us while we were laughing at each other’s irreverence, that guy gave away the bar (along with his crooked barback.) To him, booze was an advertising expenditure, not an asset to sell in great numbers with high margins.

My barback friend on this board was the man who notified me weekly, “Rock, you’re not going to believe how much beer he gave away last night after closing.” Hence, I got paid nightly, because the barback tipped me off.

Fun bar. Worked there 3 times after each bankruptcy just because of the stories which wrote themselves nightly. One time, the bar exited BK when a millionaire ex-pig farmer from NC bought controlling interest in that bar. (That new partner was as dumb a hillbilly as I ever met, and alcholism was his thing.)

Completely off the chain bar all 3 times. You knew we were destined to fail with that same partner - all 3 times - kept things interesting by holding parties til sunset to impress the staff and locals and new owner. I met probably half the Top 20 country stars at that bar, and these boozehounds helped close us down on nights when Songwriter’s Festival was in top gear. The parties were legendary. Sometimes moving the whole thing to a hotel on a beach where we watched sunsets, built bonfires (a famous star got kicked out of his hotel room for that one) and one or two of us would make “beer” runs to the storage fridge for two ore more partners drunk out of their minds listening to country stars play one song, and then pass on the guitar to the star next to them. Just another day in Paradise.

Way off track, but yeah, heat maps help you suss markets and bar storage. “Where do we stand?” A heat map can tell you in a split second.

That is the reddest of the red on this heatmap. Goldman Sachs was the leading loser last Friday. Why?

So I punch in GS to the search bar. I’ll highlight the news story which tells us why GS was down on a day when 98% of the market was green. 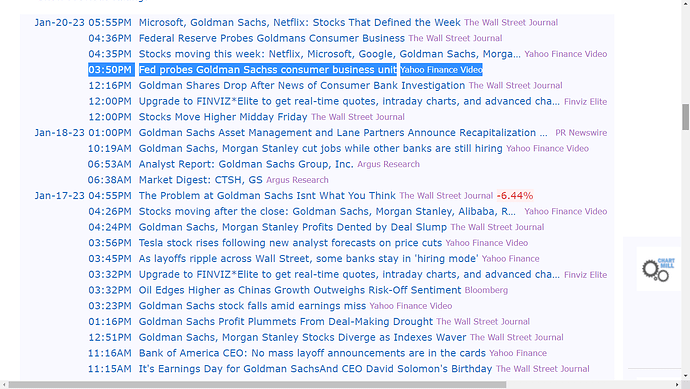 LLY’s bigger rectangle tells us it has a larger market cap than GS. Intuition takes over once you unlock where the map can lead you for long/short ideas.

Thanks Peregrine, I need to ask you more questions. That is some valuable information, I really appreciate it.

You can ask, but I may not respond until the chemo for this week leaches from my body over the coming weekend.

But I will be happy to assist you when I am up to it.

You can ask, but I may not respond until the chemo for this week leaches from my body over the coming weekend.

I understand, sorry you are going through this and hopefully you will get better soon.