Just a quick visit last week, to check out the final results… Smal kitchen in an older home, long, narrow, but they (DW’s cousin’s DD, but we consider her our niece) did a great job. Hubby did all the trim, and the layout, all new cabinetry & appliances (Bluestar), countertops on the right are thick soapstone, sink was custom made along with the range backsplash…

Flooring is new, but matches the flooring in the rest of the home.
Tooke 3 or 4 months, they have a lot of patience! 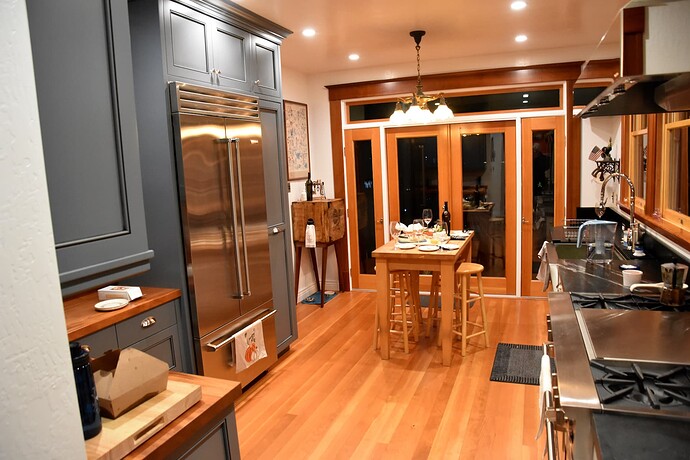 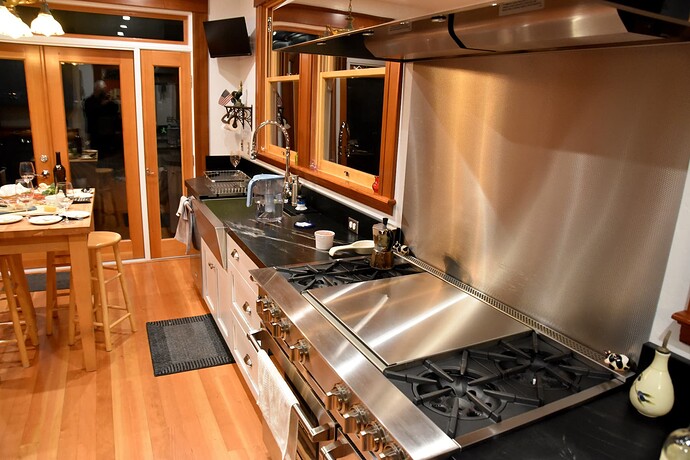 It looks great to me. When we built our kitchen back about 15 years ago, it was somewhat of a comedy of errors. DW got in with a “designer” and planned the kitchen. I kept asking her for plans and cost estimates (being a engineer writing A.F.Es costing $100,000s & (occasionally) millions), but never did get them. We now have to live with their mistakes.

How did the flax removal project work out? I would have sprayed it with “Roundup” 4 or 3 times and then cut it with my chainsaw, me.

How did the flax removal project work out? I would have sprayed it with “Roundup” 4 or 3 times and then cut it with my chainsaw, me.

Ahh, that flax still awaits my attention, but it seems the drought or maybe my previous attempts have taken its toll… A lot has dried up, dies, I had taken a ‘fan’ or two out last yer, but it survived, now it seems a lot more has crashed… Still mean to take it out, wrap it and at least whack it off at ground level, cutsaw or chainsaw, want it gone… Maybe enlist my BIl if I get going on it, need to tarp our 24’ Trailer, too so maybe make it an event…

Yes, that is a very nice kitchen, it’s only the two of them, but they both like to cook, so cost didn’t bother them… I looked up that 4 burner, 24" griddle Bluestar range, it runs $15K! So I imagine the ref ridge, range hood were similar… Ahh, the youth, well, they do know what they like and don’t hesitate it seems… There’s a couple Teslas, and 3 other vehicles to play with as well, so they do stay busy… Nice to see the finished work… The home is part of several Heritage Homes in town, being preserved externally and generally inside as well. they stripped the gray paint off the floors, and other painted woodwork, have done nice remodelers upstairs as well. Basement has a large sealed, controlled wine cellar, its inventory on it’s own laptop… As I said, he’s a handy fellow… If only i had a bit more of their ambitions…

Good to see you found the new TMF, it takes a bit of tuning, ignoring some ‘features’ to let it work, I’m afraid we lost a bunch of folks along the way to today… Sad to see the ignoring of US & world events, people, opinions discussions banned… Tactical error I’m my opinion…