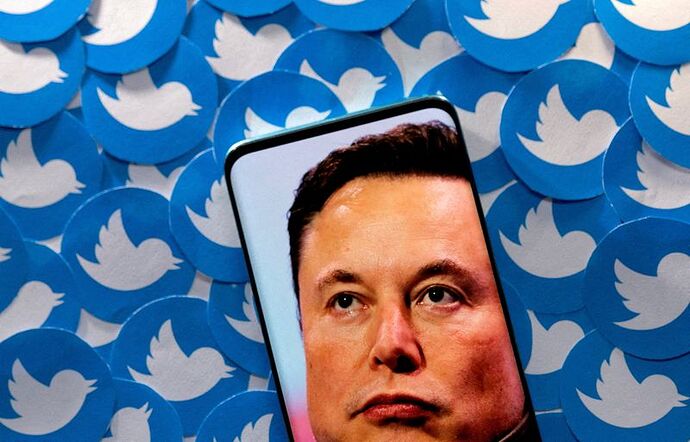 Blockquote LONDON (Reuters) - Put off by Elon Musk’s muscular management style? Move to us! That’s the pitch being used by talent-starved technology firms trying to lure thousands of former Twitter Inc employees laid off by the social media company under its new owner.

Blockquote Twitter has fired top executives and enforced steep job cuts with little warning following Musk’s tumultuous takeover of the social media platform. About half of the workforce - around 3,700 employees - has been laid off.

Blockquote Hundreds more are reported to have quit as a result of his sweeping reforms. On Monday, the head of French operations was the latest senior manager to leave.

Here’s a laid off twitter employee in a job interview.

Musk and those laid off are both correct. The job going forward is 80 hours per week or more. No one at Twitter has worked like that for at least 5 years.

The problem for Musk is paying people for that sort of work. It will be interesting to see what he comes up with. Because Twitter is not a start up offering options from the ground up.

Here’s a laid off twitter employee in a job interview.

If you don’t do your job you get fired!

Elon Musk fired Twitter's head of sales after she refused to sack more...

Elon Musk begged Twitter's head of sales, Robin Wheeler, not to resign but then sacked her anyway after she refused to fire more employees.

It may be that a primarily text-based microblogging site isn’t easily monetizable, especially compared to more picture- and video-oriented competitors. Twitter has long been smaller than the other major social network services, and has been a lower-priority channel for advertisers.

It’s pretty clear that Musk overpaid for Twitter. What’s also likely is that by overpaying, he put more debt onto the company that it can possibly service with its existing product offerings. Now there’s a ticking clock for them to come up with some really big revenue streams very quickly.

It’s not surprising that many Twitter employees - even hard-working ones - wouldn’t want to sign up for that kind of semi-perpetual “crunch” with virtually no information about what’s in it for them. Musk basically offered them a deal where they would be agreeing to work nights and weekends for an indeterminant amount of time, for some undetermined (and perhaps non-existent) additional benefit, with no assurance of having an adequate team around them, for some undefined purpose - with an artificial deadline. For a company that Musk loaded up with so much debt that there’s now a much smaller chance that the equity rewards that normally are offered to entice people to take that kind of crunch-level workload will pay off. That’s not an especially attractive proposition. Especially for anyone with a valuable and portable skill set.

Don’t know about the lazy part, but

I agree.
And, the ‘lazy’ meme is irrelevant - a red herring.

Twitter had a CORPORATE CULTURE that Musk wants to change.
Instead of taking the ‘Millenial approved’ path of ‘pretty please do it my way’… Musk ‘cleaned house’ and took the ‘New Sheriff in Town’ path.

When the dust settles, the NEW corporate culture will be something more in tune with Musk’s philosophies.

Dorsey had apparently lost control of Twitter.
Under Musk, Twitter is a ‘turn around’ story. Instead of trying to ‘pretty please’ that turn around, Musk is ‘seagull managing’ that turnaround.

If you do NOT want a ‘turnaround’, then buy BRK.

‘seagull manager’ - a ‘manager’ that is hired to come in, take over a department/section/business, poop all over everyone, change the corporate culture, then fly away/leave.

I agree that something is broken. Buying a company for $44 Billion with no clear business plan may be what is broken. 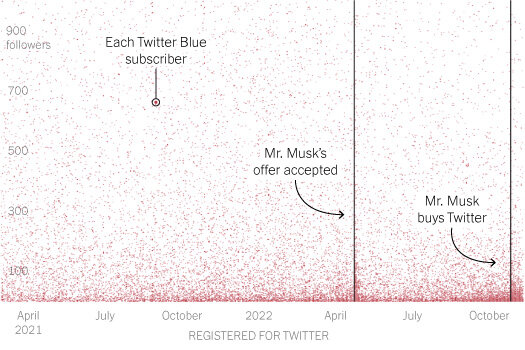 Adult Performers, Trump Supporters and Parodies: Who Is Paying for Twitter?

Elon Musk made Twitter Blue, an existing subscription service, the backbone of his strategy to increase revenue. We looked at who has signed up for it.

Clearly something needed to change. Equally clearly, Musk has no plan on how to do that. Or at least it appears he has no plan. His first move was to insult his advertisers. His second move was to propose a $20/month subscription. That quickly became $8/month, but the roll out was a disaster and had to be quickly halted. Now the plan seems to be to let the all bad actors back in–you know the ones advertisers don’t like. Crazy.

It’s not surprising that many Twitter employees - even hard-working ones - wouldn’t want to sign up for that kind of semi-perpetual “crunch” with virtually no information about what’s in it for them.

I believe slavery was earlier settled generally, Corporate dictators try to revive it, the smart ones grabbed that 3 month’s pay gold ring and got off that whirling mess… It’s spiraling down. likely at an increasing rate, the remains folks best be grabbing whatever scraps they can and leave it far behind… To me, Twitter has just been a scattering of random postings, never attractive, only interesting because of old friends that occasionally posted there… Sooner it’s gone, the better… All it is now is a playground for bots, likely with foreign interests at their heart… Useless…

All it is now is a playground for bots, likely with foreign interests at their heart… Useless…

I’d amend that to say “mostly useless.” It is pretty good for sports and some current events. Mostly horrible outside of that.

If the news about Twitter are true the problem was not individual coders but the company culture. It was not being run to make money. It’s the top brass that sets the tone.

If the news about Twitter are true the problem was not individual coders but the company culture. It was not being run to make money. It’s the top brass that sets the tone.

In particular that reminded me of our own spinoff, Lucent technologies (LU), the last conference I remember, Director level hosted in Reno, NV for all of us in the NorCal/NV/HI group of Installation, part of his presentation was no how great we were doing and that they expected us to break into the $50B bracket before too long… More work than we had people for, bringing in transfers to help… And then it all came crashing down, the top management levels were gaming the system, showing hardware sold that was really out on credit, to startups that began to crash, but those upper levels took their golden parachutes and bailed, soon after it all came down, sold to Alcatel, then on to what is now Nokia, none left of the Installation group…

It’s only a matter of time before Twitter folds, is my guess, hopefully the coders/developers find other slots…

Twitter sold to Musk is the opposite of Ma Bell selling her heritage. Lucent was Bell Labs, one of the finest research centers in America if not in the whole world. The same short sightedness was visible at IBM when they outsourced the PC to Intel and Microsoft.

The difference is that Twitter was NEVER a great business like Ma Bell and IBM were in their hay days. Twitter was captured early on by politics. Same fate as the mainstream media. Can it be reversed? Time will tell.

Most it’s the sadness of seeing the parallels of so many talented employees having the rug pulled out from under them by upper management wheeling and dealing… Including the Bell Labs, and the high end talents, skills there, all the factories, labs gone… I happened to have the time to retire, travel, nit sure the Twitter folks were that set up, still many years to stabilize their lives in some other industry… Today’s news that other techs companies are cutting their workforce, whether it’s Google, HP, others, its still a lot of folks that thought they had stable employment for years to come… Poof, gone…

Sure, the boss can demand 80 hour work weeks, but eventually the only folks left will be those that are unable to find work elsewhere. Not a smart formula for success.

Some honchos have a record of extreme work habits, as they work to either realize their dream, or make themselves rich, beyond the dreams of Avarice.

Asking the low level staff to work like that, so the honcho can realize his dreams, or make the honcho rich, beyond the dreams of Avarice, is a different matter.

The coders are not lazy. No one in a job gets to be lazy for long.

The coders were not in a startup. Musk is demanding startup people to code for him. You can not get a 40 or even 50 hour a week coder to suddenly do 80 hours a week. The 40 hour coder has a life.

Dorsey was broken. Twitter is a birdbrained Social Media, SM. The platform is not made to generate much income.

The latest news I read the Blue whatever is it badges? The old blue something program which I think is not badges allows people to have their posts elevated over everyone else’s. That is now rolled up in the Blue Badge program. But the Blue Badge program is no longer allowing people to sign up. Too many people were signing up fake accounts to get badges.

The point is following a thread on Twitter is awkward. The new feature promotes actual posts over the spam. Supposedly. But everyone on Twitter is spamming. The posters should stop kidding themselves by how serious they take ONLY their own posts. Garbage. All garbage.