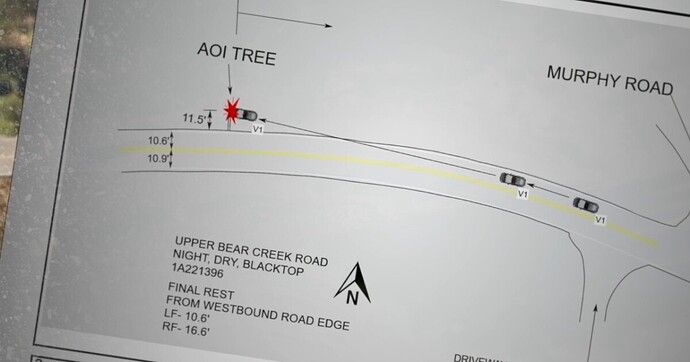 A deadly single-car crash in Evergreen involving a Tesla is now part of a federal investigation that is looking into the safety of electric vehicles.

Colorado State Patrol Sgt. Rob Madden said the investigation will attempt to determine why the driver could not open his door, what his condition was after impact and how the electronics operated after the fire started.

Shoemaker provided training to the Evergreen Fire Protection District after this crash and said he believes the driver was awake and alert but was unable to open the door.

Shoemaker also studies post-crash fires in electric vehicles and other examples where drivers could not get out of the vehicle. He cited an accident in British Columbia where a driver kicked the window out of the driver-side door in a Tesla that had caught fire in the road.

Shoemaker also studies post-crash fires in electric vehicles and other examples where drivers could not get out of the vehicle.

Where is the next Ralph Nader? Or drag the original out of retirement.

Interesting design choice. The window has to go down slightly before the door opens. That simplifies fit, but makes escape difficult. Just another reason I won’t buy a Tesla, but also a reason I will never be a passenger in a Tesla. I couldn’t find another car with this escape problem. youtube: Know How to Escape from a Tesla Model S, 3, X and Y in an Emergency 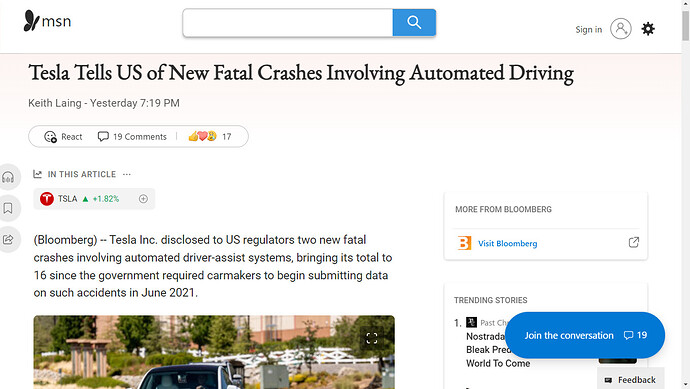 (Bloomberg) – Tesla Inc. disclosed to US regulators two new fatal crashes involving automated driver-assist systems, bringing its total to 16 since the government required carmakers to begin submitting data on such accidents in June 2021.

Peter, I don’t know if you caught this video from China a few days ago involving what the driver swears was unintended acceleration?

Details leaking on Twitter along with much conjecture. Some Chinese claim the car was on “summons” but we have heard the Summons feature on Teslas has been disengaged by the company. Some say there is no driver in the car. How does that work? Were you the driver of this car, would you be driving with your foot stomped on the accelerator while trying to avoid hitting people in this harrowing ride? I don’t think so. Warning! Two people died in this series of collisions. You’re going to see this c…

Peter, I don’t know if you caught this video from China a few days ago

Yes, I did. I think it was on METAR. All the usual Musk worshippers came out of the woodwork to blame it on the driver. They pretty much shut down any attempt to consider or discuss potential problems with Tesla (the car or the stock).

How times have changed from the early 1960s, when we were quick (sometimes too quick) to blame bad outcomes on the product rather than the user. Today, the loud voices blame the user before the product.

My thought is that neither approach is good. Products do have problems from time to time. Users can and do misuse the product. Sometimes both contribute to a problem.

The only real error is failing to consider all sides of an issue (perhaps a problem with a product, as in this case) before trying to lay blame.

And THAT has application to investing, which I will leave to the reader to consider.

Demand for Tesla is most definitely taking a hit due to Musk and his November Surprise and now the destruction of Twitter.

Drudge Report from a few hours ago: 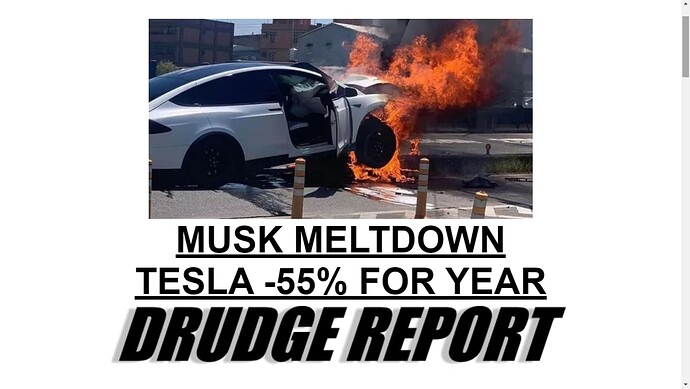 So Musk is not gaining any true friends or support from the right or left on Twitter.

This will be taught in business schools for centuries to come should $TSLA indeed become $TSLAQ. The more I watch Musk and his minions on Twitter, the more I wonder “How long before the Tesla Board grows some stones and fires Elon?”

p.s. Here’s Elon falling all over himself with the rightwing trolls on Twitter. None of these traitors will ever buy a Tesla, but hey, they will sure own us Liberals on Twitter. 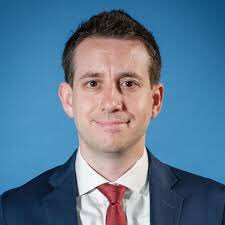