Does anyone have historical IV data for BRK, as far back as possible?
Many people, on this board and elsewhere, discuss IV from time to time.
My question is whether anyone has a handy-dandy time series of IV?

If not, perhaps we could we put one together given the bits and bobs that various people may have?
WEB has stated that even he and Charlie will disagree somewhat about the precise number for IV.
I’m not concerned about small deviations that might occur from pasting together different sources, so long as they are reputable sources.

I don’t recall seeing anything like this. When it was active, I would use the “intrinsivaluator” tool and graph the results along with market prices. I think if you’re expecting only “small deviations” Amon opinions of intrinsic value you’ll be quite disappointed with a compilation of the data you’re looking for.

I’m thinking in particular about how drastically Whitney Tilson’s estimate of intrinsic value changed from a month before a market slump vs. during a market slump. But I’ve also seen people include discounts to mark-to-market securities and others project things into the future.

this from mungo of use?
http://www.datahelper.com/mi/search.phtml?nofool=youBet&mid=34765223

@ValueOrGoHome Yes, I do remember that now. I’ll see if I can pull something up on the WayBackMachine.
@ellipse It is helpful, thank you!

Does anyone have historical IV data for BRK, as far back as possible?

I’ve argued a number of times that the trendline of a log-log plot of price/share versus BV/share serves as a reasonable estimate of IV, at each point in time over the period of the plot. “In the long term the market is a weighing machine.” In order for the trendline to serve as a good estimate of IV, the plot needs to include multiple periods of both overvaluation and undervaluation, so one wants plots to include 30+ years of data. Neither the price nor the IV have to increase at a constant rate, or at the same rate. I have price and BV data going back to October 1964 (fiscal year end), and I have posted plots of price versus BV, as well as price versus trendline over time. A plot of price versus BV from October 1964 to June 2022 has an r^2 of 0.97. (A high r^2 does not necessarily mean that the trendline is the best estimate of IV. Prices could, for example, consistently run 10% above IV or 10% below IV, and the plot would have the same r^2. However it is highly probable that the trendline price is close to IV.) A plot of price/trendline versus time shows what one would expect, that the stock was overvalued in 1971, 1996, and 2007, and that it was undervalued in 1975, 2000 and 2020. The overall result, I argue, is a reasonable estimate of IV at each point in time since 1964.

My interest is in Jim’s work, where he showed that for Berkshire that buying a good company cheaply (he used book value as a proxy for IV for BRK) tends to lead to nice average forward one year returns, and in @cwags02 follow-up on that.

So how do we back-in to Kish Most Conservative IV estimate today…given that it has the best R2??? What is the fat pitch price based on this?

I think I did this right, does your log-log look something like below? 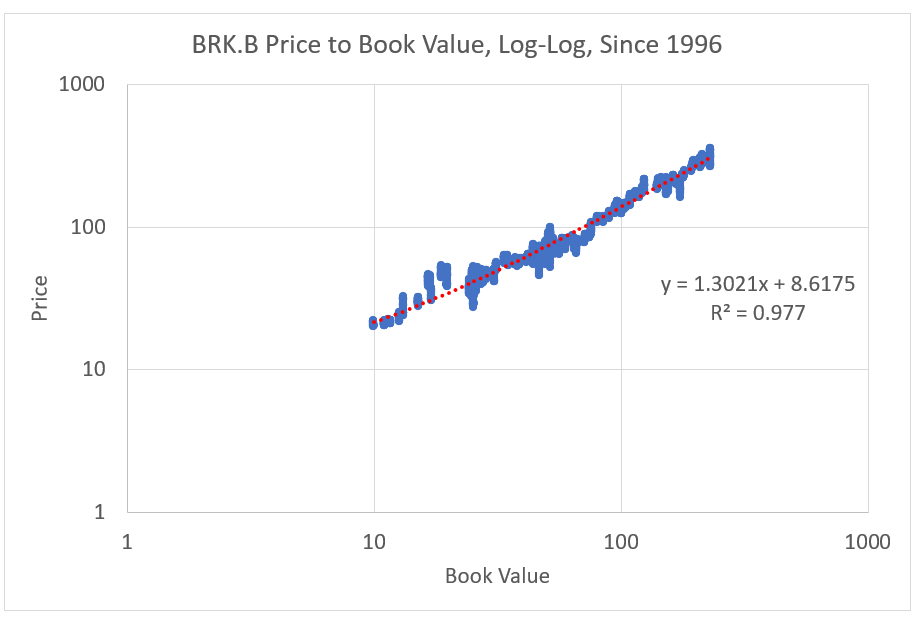 Morningstar gave me the data until 1996, I’m not sure if I can get anything further back.

Assuming I did the log-log the way you described then the linear regression is giving a BRK.B stock price of ~$281 with a BRK.B book value of $209.5; @DetroitBadBoy , that doesn’t seem like the back-up-the-truck level. But this is a different analysis period and kind of like comparing apples to oranges.

This is an incredibly simple approach and it seems informative. I love it. Thanks for sharing @rrr12345!

Yes, except for a log-log plot I would use a power law trendline. I use the high and low price during the quarter versus the ending BV, but the starting BV is just as good.

I can post later (have something to do now) some plots with M* data back to 1990-05-31, just for comparison. Recall from the other thread that both @cwags02 and I use M* data, but from different sources, and they differ slightly.

If one were to try out such a trend line for the type of analysis that Jim was doing, i.e. relating future forward return to present measure of value e.g. ‘book value’, the determination of the line can only use data in the past of the date to which you associate the future return.

This is an incredibly simple approach and it seems informative.

Support for this valuation method, which I call the weighing machine method, comes from Buffett in the 2014 annual report: “Market prices, let me stress, have their limitations in the short term. Monthly or yearly movements of stocks are often erratic and not indicative of changes in intrinsic value. Over time, however, stock prices and intrinsic value almost invariably converge. Charlie Munger, Berkshire Vice Chairman and my partner, and I believe that has been true at Berkshire: In our view, the increase in Berkshire’s per-share intrinsic value over the past 50 years is roughly equal to the 1,826,163% gain in market price of the company’s shares.”

I have been using the weighing machine valuation model for more than a decade. It’s one of several models that I use to estimate Berkshire’s IV. The IVs from the weighing machine model tend to fall in the middle of the range of IVs from other IV models. In 2016 I wrote a paper on the model, which I did not publish, but which I did post to the files section of chucks_angels. The paper discusses the logic of the model, beginning with the almost perfect fit of John Kish’s DCF valuations when plotted against BV. It also discusses the variation of the calculated IV with starting date for the regression (The variation is about +/- 6%, which is similar to P/E models but much smaller than DCF models). In addition, it shows the growth in IV as determined by the model. Since 1964 the growth of IV has fallen into three distinct periods, 1964-1980 (22%/year growth), 1980-1999 (32%/year growth) and 1999-2016 (11%/year growth). The S&P 500 index shows the same pattern, but with lower growth rates in each period, 1.4%/year growth from 1964-1980, 13%/year growth from 1980-1999 and 5.3% growth from 1999-2016. If anyone is interested, and if there is a convenient way to post the paper, I will be happy to post it.

I’d be very interested, and assume many others as well.
There is an upload button, not sure what happens if you don’t upload a pic but try a pdf.
There is a hyperlink button but I assume you don’t have your own website?
I suppose dropbox or some other file share could work.

Thank you for your interest. Unfortunately the paper is a bit long, 16 pages, to upload into a post, and I don’t have my own website. I’d rather not use a file share app like Dropbox or Google Drive. Maybe I could just upload a few figures that tell the story.

I’ll upload a few figures. Thank you for your patience. 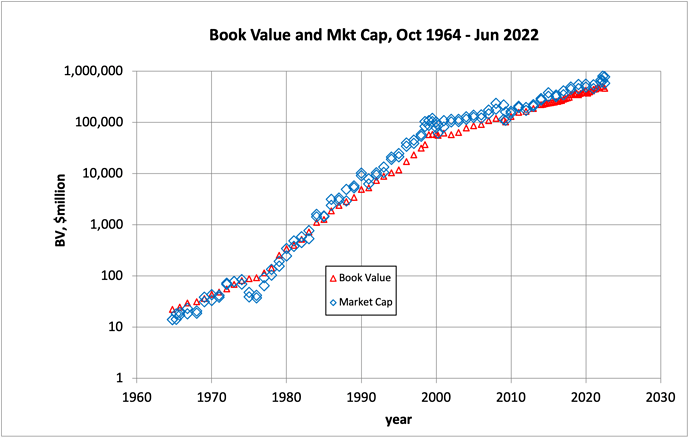 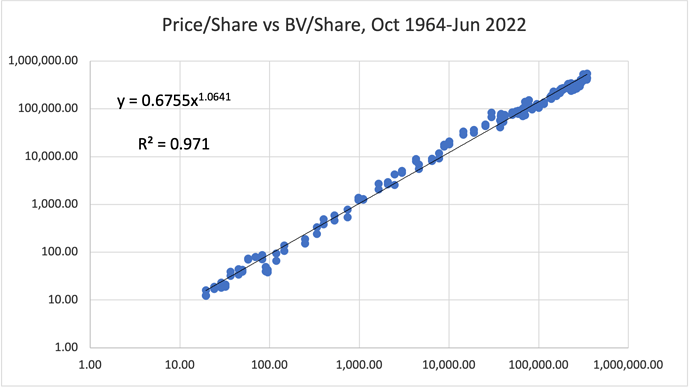 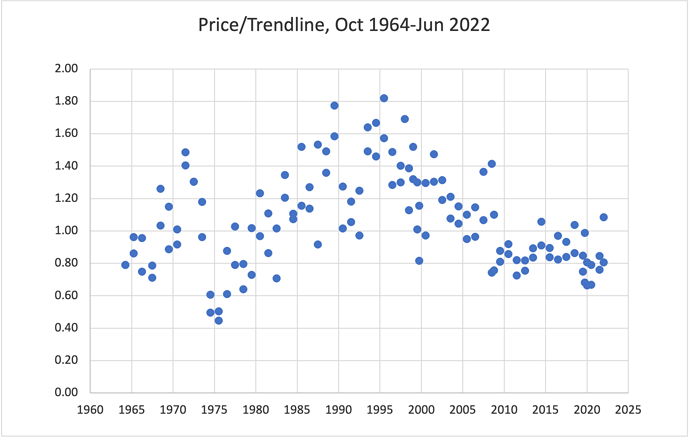 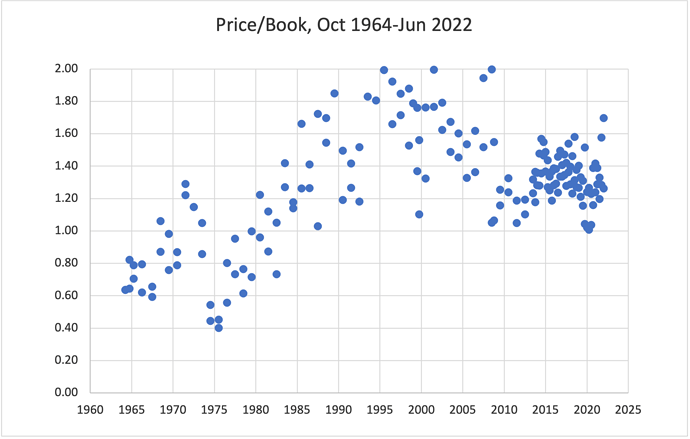 Very nice; thanks for the work and the thread.

Looking at your last plot: 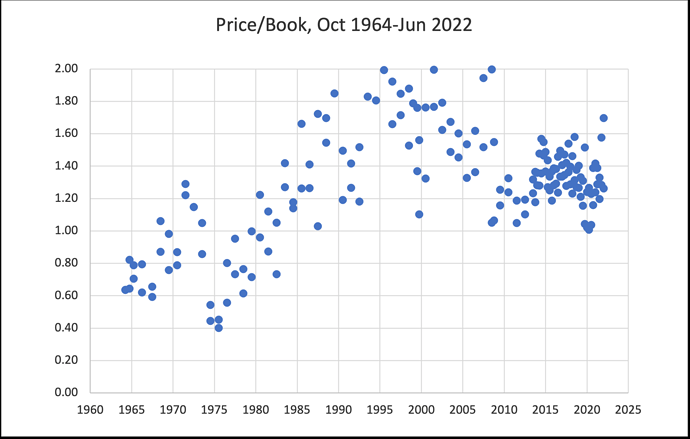 And addressing the bottom-right corner, or the time that P/B has been the lowest over the last 25 years or so: 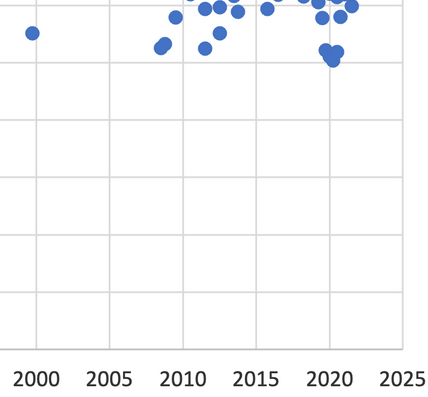 I think I can identify in it the macro trends of the 2008 housing bubble and the 2020 pandemic.

IIRC, BRK was added to the S&P 500 only ca 2009 (around the time of the BNSF purchase), so arguably became more sensitive to secular trends then

My thesis: as long as the corporate culture remains intact, then buying on a secular drop with BRK P/B <1.2 demonstrably safer than any other publicly listed equity I can think of

Wow. Very nice, thank you!
A few questions prompted by you generously sharing your work:

Do you happen to have handy the unlogged version of the “Price/Share vs BV/Share” plot? If not, no worries, I’m not suggesting work! Just curious.

The “Price/Trendline, Oct 1964-June 2022” plot computes the trendline using all the data, then plots the ratio of the price on a given date to the trendline value on a given date, correct?
On any particular date one has data only on or before that date, so one can imagine computing the trendline on some date in say 1995 using data only on or before that date and no future data. You had remarked on importance of starting with sufficient data covering many business cycles, e.g. 30 years (1964 through 1994), that’s why I started with a hypothetical date in 1995. There’s about another 28 years of data from 1994 to now, almost equal to the initial 30 years.

Have you happened to have looked at the associated residual plots, QQ plots, etc?

My thesis: as long as the corporate culture remains intact, then buying on a secular drop with BRK P/B <1.2 demonstrably safer than any other publicly listed equity I can think of

As I recall, everyone was convinced “Buffett had lost it”. And maybe it was a fair argument going into 2012.

Maybe a similar situation today, or maybe not. Book value growth this year seems likely to be down or flat at best, however IV continues to increase steadily.