This company does not fit the mold of hyper-growth-with-no-earnings stocks, but I thought I would give it a shot as I have been starting to accumulate. Celsius makes healthy energy and weight loss drinks. Compared to Monster and Red Bull, they are tiny, but are growing fast. They also have a distribution deal with Pepsi, thus opening up valuable shelf-space in stores, something very hard to come by as you know if you ever watch Shark Tank.

Monster has 39% of the market, Red Bull 37% and CELH a mere 4.9%, but they seem to be starting to eat other companies’ slice of the pie as they just surpassed Bang Energy for 3 place in market share.

Pepsi invested $550 million for an 8.5% stake in Celsius on Aug. 2, making it the long-term distributor of Celsius products. It’s quickly paying off for Celsius. As of the third quarter, its U.S. store count exceeds 174,000 locations nationally, up 54% from 2021… And convenience store locations stocking its drinks spiked 77% to 86,000 during that time… Celsius is now the second-largest seller for Amazon’s energy drink category with an 18.5% share, well ahead of Red Bull’s 12% share. Monster still leads with a 26.2% share on Amazon… CELH stock analysts polled by FactSet forecast Celsius sales to more than triple to $978.2 million by fiscal 2023 from the $314.4 million it recorded in fiscal 2021. It expects to report $650 million in sales this year.

As the “get-out-of-lockdown” boom continues, a return to the gym could help accelerate its growth in the workout “boosters” it sells.

Monster’s earnings have fallen for the past five quarters despite quarterly sales averaging 16% growth during that time. Aluminum-can shortages, higher transportation costs and a stronger U.S. dollar bit into profits and margins, the company noted in its Q3 results in early November. But Monster says it’s already seeing supply challenges and aluminum prices easing, according to the quarterly report. (So this could be even more beneficial for the earnings of CELH.)

So why am I posting this? Because, while not an SaaS, subscription, land-and-expand model, it is a fast grower that can bring some diversity and actual earnings. I recall a time when “someone” from the board came over to the Westport board and lambasted us for buying a company with no earnings while his NatGas powered forklift company was growing earnings at 150% or something like that. I don’t recall who that was. So this board has evolved and may evolve again.

CELH revenue catapulted to $133.4 million in the first quarter of 2022 from $6 million during the same period in 2017. For its most recent third quarter, Celsius reported $188.2 million in sales, up 98% year-over-year. Company gains accelerated at the beginning of 2021. It averaged 145% revenue growth over the past six quarters, though that has started to slow over the last three quarters.

It has a 3-year sales growth rate of 109% Currently a huge PE, but solid earnings have been estimated for this year. 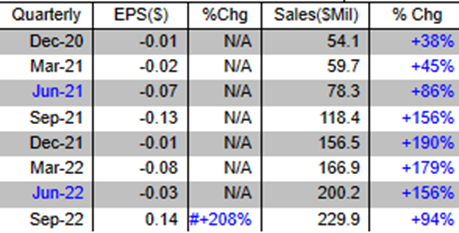 Saul, if this is too far off base, let me know and I won’t post another one list this, for instance PODD.