CHINA News: A Thread Anyone Can Add To (Please Do)

Xi and the CCP have lost control of the China narrative. It’s worth keeping an eye on these “fires” in China. I’ve been seeing high-rises, office building, and other factories suddendly catch fire in the past four to six weeks during the most severe lockdowns: 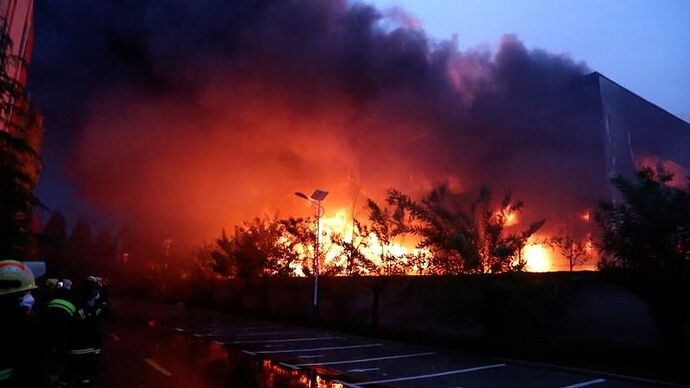 A fire at a factory in central China killed 36 people on Monday, according to Chinese state-media, the latest in a string of fatal industrial accidents to hit the country in recent years.

A fire at a factory in central China killed 36 people on Monday, according to Chinese state-media, the latest in a string of fatal industrial accidents to hit the country in recent years.

State broadcaster CCTV reported Tuesday that two people remain missing and two others were being treated for minor injuries following the blaze at the factory in Anyang, Henan province.

Police have detained an unspecified number of suspects in connection with the blaze, which took firefighters nearly seven hours to put out, according to CCTV. 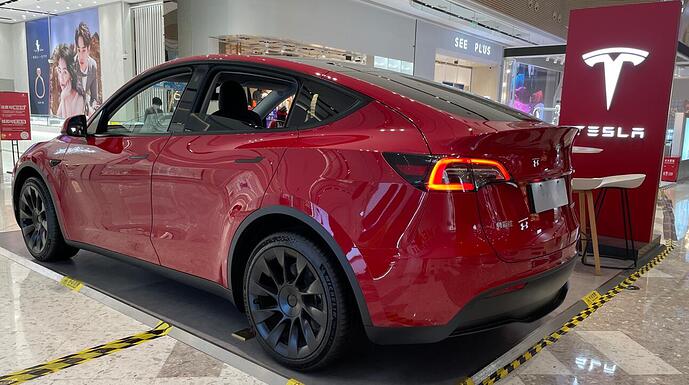 Tesla's two promotions in China over the past two months have not had the desired effect, local media said.

This is bad, very bad. Take heed $AAPL investors: No Food for workers unless you scramble, Lord of the Flies like, for dropped off boxes of basic foodstuffs, none of which are given to employees in an orderly fashion. No medical care even if you test positive at Foxconn. Shut your mouth. Quarnatine. Work. And yet non-Union Employees are refusing to work and many helped tear down fences erected to keep employees corralled inside the factories. Enforced work at a “closed loop plant” in quarnti…

Latest $AAPL look on the daily, weekly, and monthly charts 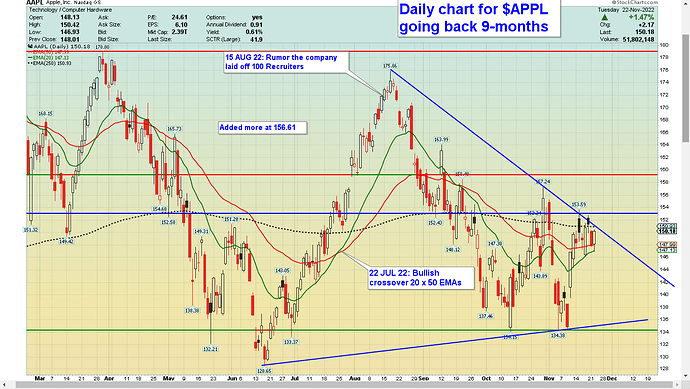 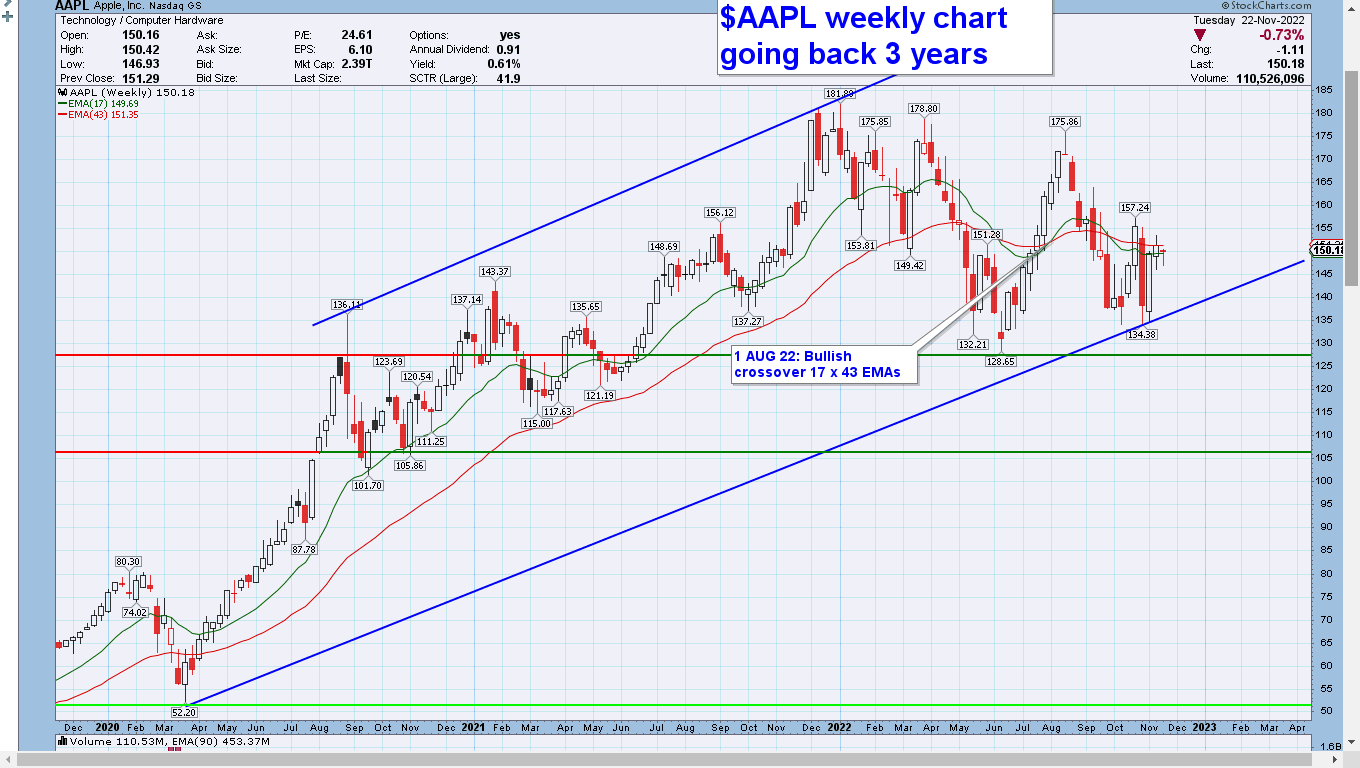 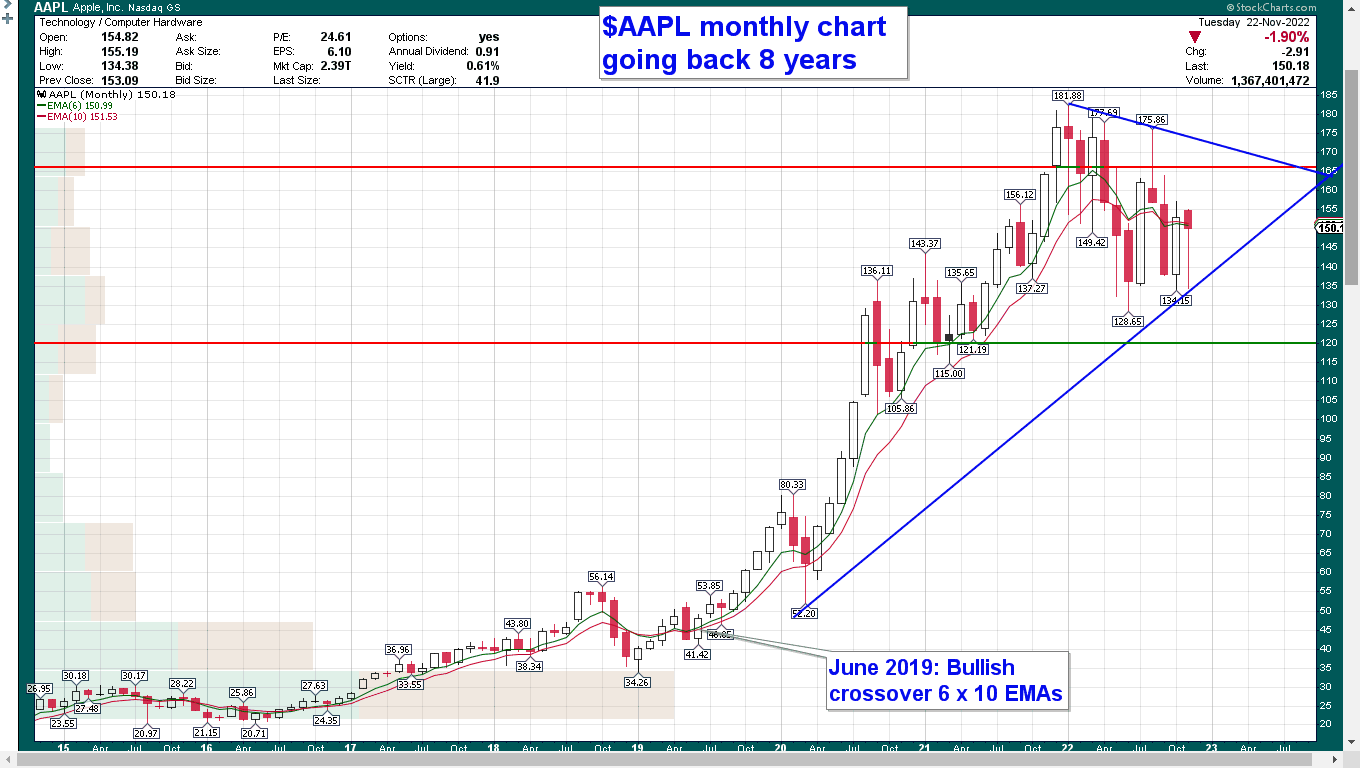 China Is Investing Billions in Pakistan. Its Workers There Are Under Attack. 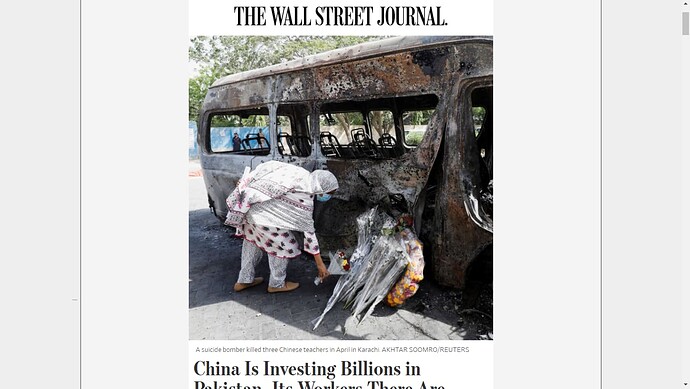 “The Chinese have to come to terms with the fact that these are unstable countries with fragile internal politics,” said Yun Sun, director of the China program at the Stimson Center, a Washington-based think tank. “If you are going to operate here, you are going to encounter these problems.”

Beijing accepts a degree of security risk in pursuing its Belt and Road program and is committed to working with partner governments, such as in Pakistan, to mitigate threats to Chinese personnel and assets, Chinese experts say.

“We couldn’t possibly wait until all terror attacks cease before starting new projects,” said Qian Feng, a senior fellow at Tsinghua University’s National Strategy Institute. “We have to keep working, studying the issues, and undertake preventative measures at the same time.”

A bit more from the above OP:

Raffaello Pantucci, co-author of the book “Sinostan,” about China’s influence over its Muslim-majority neighboring nations, said Belt and Road was designed to help countries develop economically and lead to greater stability.

“The truth is, this doesn’t always resolve peoples’ anger,” Mr. Pantucci said. “Pakistan is a toxic brew for China where they have become enemy No. 1 for an array of militant groups on the ground due to their proximity to the Pakistani state.”

The Baloch Liberation Army are secular insurgents who say the province’s natural resources are being exploited by the rest of the country and often target the Pakistani military. Jihadists from the Pakistani Taliban also have attacked Chinese nationals. 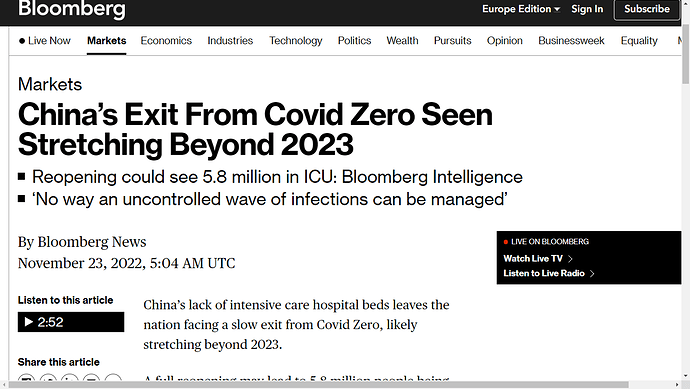 A full reopening may lead to 5.8 million people being admitted to intensive care, overwhelming a health system that currently has less than four ICU beds per 100,000 people, far less than developed countries, according to Bloomberg Intelligence senior pharmaceutical analyst Sam Fazeli.

The euphoric reaction to China’s softening of its zero-Covid-19 stance looks misplaced, given full reopening may lead to 5.8 million ICU admissions. To avoid this, continued caution across many regions in China will be needed, but this will prolong the time to full reopening beyond 2023. 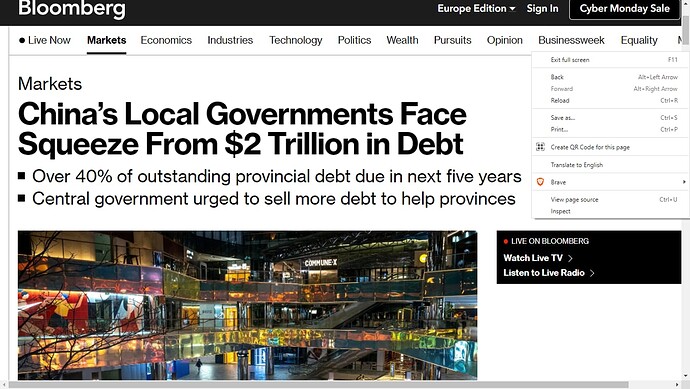 Signs are growing in China that local government debt burdens are becoming unsustainable.

China’s 31 provincial governments have a stockpile of outstanding bonds that’s close to the Ministry of Finance’s risk threshold of 120% of income. Breaching that line could mean regions will face more regulatory hurdles to borrow, hampering their ability to drive up economic growth.

In addition, local authorities will face a massive maturity wall over the next five years as bonds worth almost 15 trillion yuan ($2.1 trillion) – more than 40% of their outstanding debt – fall due. 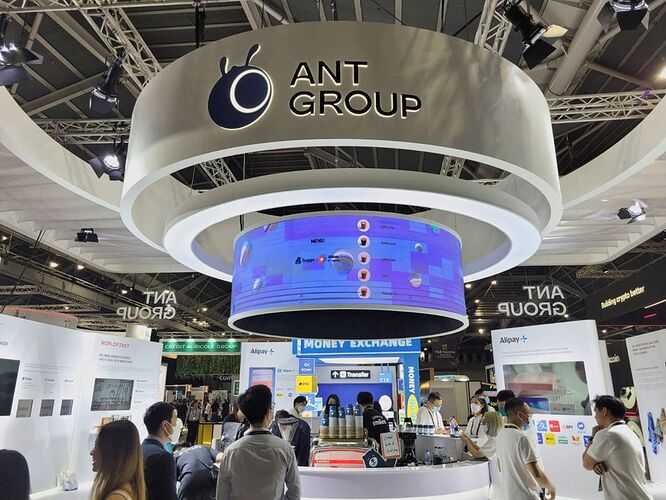 A booth of Ant Group is pictured at the Singapore FinTech Festival, Singapore, November 4, 2022. REUTERS/Anshuman Daga

The People’s Bank of China (PBOC), which has been driving the revamp at Ant after the Chinese firm’s $37 billion IPO was scuttled at the last minute in 2020, is the regulator that is readying the fine, said five of the sources.

The central bank has been in informal communication with Ant about the fine over the past few months, said three of the sources. It plans to hold more discussions with other regulators about Ant’s revamp later this year and announce the fine as soon as the second quarter of next year, said a source. 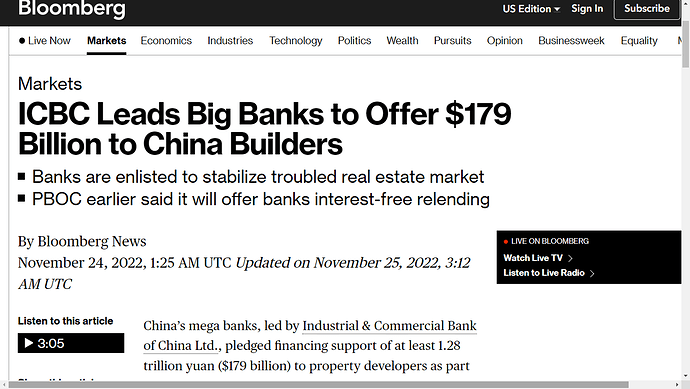 Property stocks and bonds rallied on the additional funding, as China seeks to contain the fallout from a crackdown that has already sparked dozens of defaults and sent property sales and prices tumbling. China’s priority has been to ensure that unfinished homes get completed, while supporting the stronger firms that have so far survived the crisis. 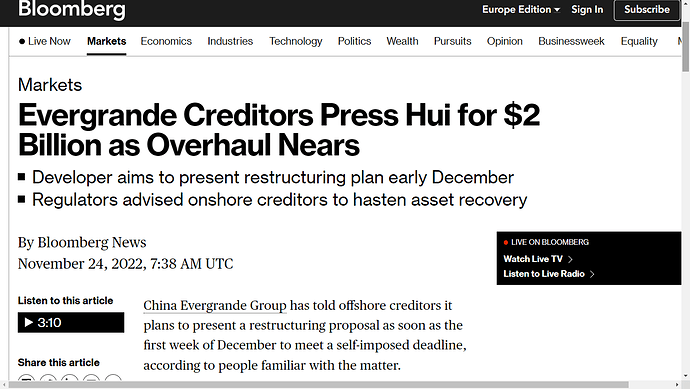 Evergrande previously told investors it would submit a restructuring proposal by the end of this year, after delaying its plan once already. With more than $270 billion of liabilities, the company is at the center of a property crisis that’s triggered a wave of defaults and caused home construction halts across the country. It’s also facing a winding-up lawsuit in Hong Kong.

President Xi Jinping’s government is trying to strike a balance between curbing debt at leveraged developers and limiting the economic fallout, as home sales tumble. Property sits at the heart of his “common prosperity” campaign, as he seeks to drive population growth and narrow the wealth gap. 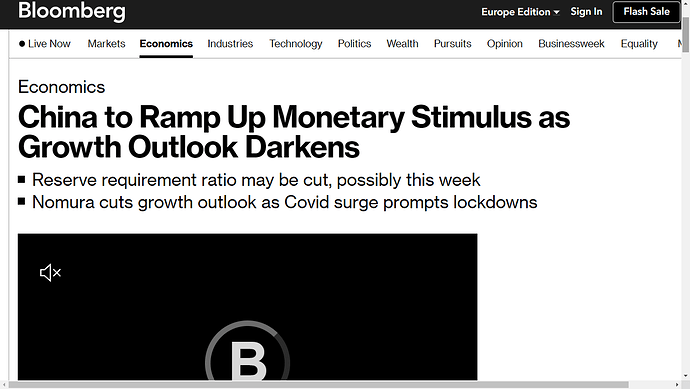 China signaled more monetary stimulus was on the cards, including a likely cut to the reserve requirement ratio for banks, as it ramps up support for an economy under strain from surging Covid cases and more lockdowns.

The State Council said in a statement Wednesday that monetary tools “such as a RRR cut” will be used “in a timely and appropriate manner” to maintain reasonably ample liquidity. A cut in the RRR – the amount of cash banks must keep in reserve – could land as soon as this week, given the central bank usually imposes a reduction within days of a cabinet statement such as this.

China’s economic outlook is darkening as Covid cases climb to a record and cities tighten restrictions to combat the spread of infections. Even with a RRR cut and more monetary stimulus, the economy is still likely to be pressured by Covid Zero. Nomura on Thursday cut its forecasts for China’s growth for this year and next, citing a “slow, costly and bumpy” reopening of the country. 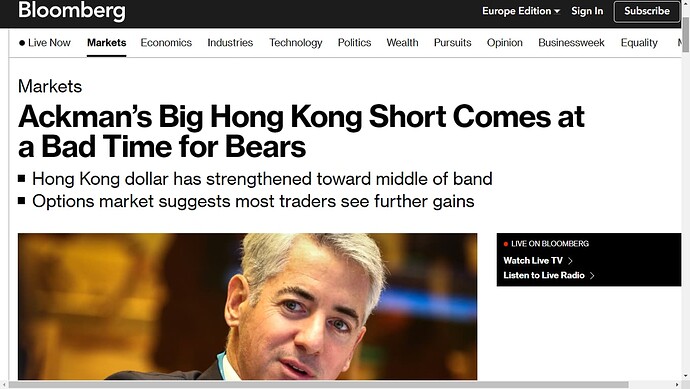 Bill Ackman’s revelation that he’s betting big on a collapse of Hong Kong’s pegged dollar will come across as contrarian to some in the market and mistimed to others.

The city’s multiple interventions to prop up its currency since May have made shorting it unprofitable, sending interbank rates higher than their US equivalents, chilling a once-popular carry trade. That’s helped the local dollar roar back toward the middle of its tight trading band with the greenback, on track for its biggest monthly gain since March 2020. There are few signs of a currency crisis.

Still, the founder of hedge fund Pershing Square Capital Management LP said on Twitter his firm owns a “large notional position” in Hong Kong dollar put options, betting the peg with the greenback will eventually break, without clarifying the size of the wager. 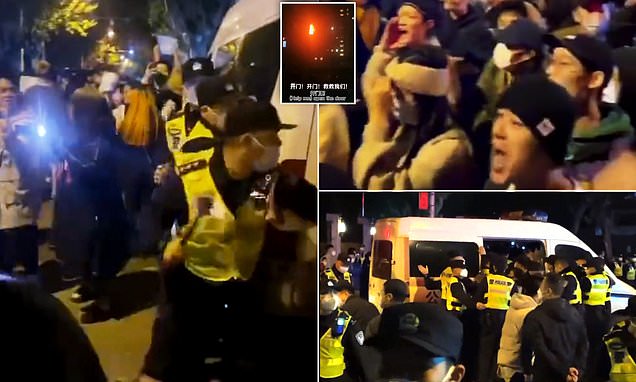 Angry protests erupted across China yesterday as citizens took to the streets in a rare display of defiance over Beijing's draconian coronavirus restrictions.

**The protests have now broken out nationwide. Xi just purged his biggest rivals from the party. Now the blame is solely on his shoulders. Let’s see how he responds. Thousands are screaming in public, in front of cops and other security, that Chairman Xi needs to resign.

p.s. One of the descriptives below one of the photos gives us an idea that the CCP cannot control the breakout of protest on social media. Look at how many times one hashtag floated through social media:

“Communication University of China in Nanjing was trending on Weibo on Saturday night, with one hashtag receiving over 180 million views. Students at the university gathered chanting slogans such as ‘long live the people’ and turning on the lights on their phone as a tribute to victims of the fire in Urumqi.”

Officers used pepper spray against about 300 protesters, according to a witness, but western journalists reported the numbers to be in the thousands.

Meanwhile last night hundreds gathered to mourn the deaths of at least 10 people in an apartment fire last week in Urumqi in the Xinjiang region, where residents were sealed in their buildings to try to stop the spread of COVID. 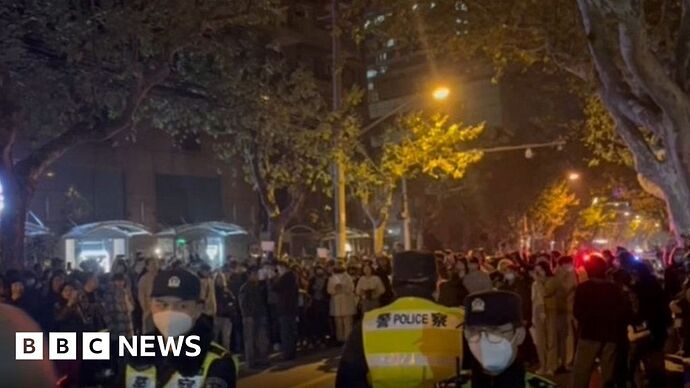 At the protest in Shanghai - China’s biggest city and a global financial hub - some people were seen lighting candles and laying flowers for the victims.

Others were heard shouting slogans such as “Xi Jinping, step down” and “Communist party, step down”. Some also held blank white banners.

Such demands are an unusual sight within China, where any direct criticism of the government and the president can result in harsh penalties.

One protester told the BBC that he felt “shocked and a bit excited” to see people out on the streets, calling it the first time he’d seen such large-scale dissent in China.

The Urumqi fire was a nightmare scenario for many Chinese who have come under widespread restrictions in recent months - locked in one’s apartment with no way to escape, according to some accounts. Authorities have disputed this, but it has not stopped public outrage and anxiety from spreading.

It has become the latest tipping point in mounting frustration. Millions are weary of three years of movement restrictions and daily Covid tests. The anger has spread to all corners of China, from major cities to far flung regions like Xinjiang and Tibet, and galvanised every part of society including young university students, factory workers, and ordinary citizens.

As this anger grows, protests against Covid measures have become an increasingly common sight. But even this weekend’s demonstrations are unusual in this new normal, both in their numbers and directness of their criticism of the government and President Xi Jinping. 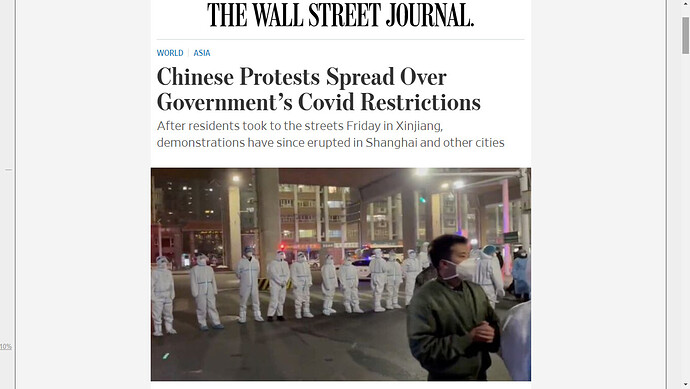 In some parts of Beijing, the capital city where security measures are among the tightest in the country, residents were marching out of closed-off compounds earlier Saturday, with some demanding to ease what they called excessive Covid restrictions, according to videos on social media and locals who participated in the actions.

On Chinese social-media, users raced against censors to spread images and news of the protests, along with expressions of solidarity. “Long live the people, may the dead rest in peace,” read one message that spread widely.

Open displays of anger are rare in China, where crackdowns on dissent have intensified over the past decade under Mr. Xi’s leadership. Having protests over the same issue break out in multiple Chinese cities is almost unheard of, outside of nationalist outpourings, such as anti-Japanese protests. Ever since the student democracy protests in Tiananmen Square in 1989, the ruling party has worked to prevent public protests from happening. 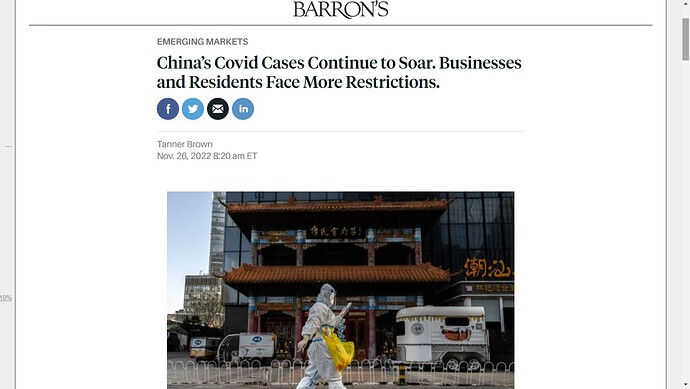 At least 49 cities—accounting for 20% of China’s economic output—are under some form of lockdown, consultancy Nomura said last week.

Contained in this video are new clips from the Foxconn riots which I have not seen elsewhere:

# Chinese people are angry now! The World Cup showed them masks aren’t needed in the world. 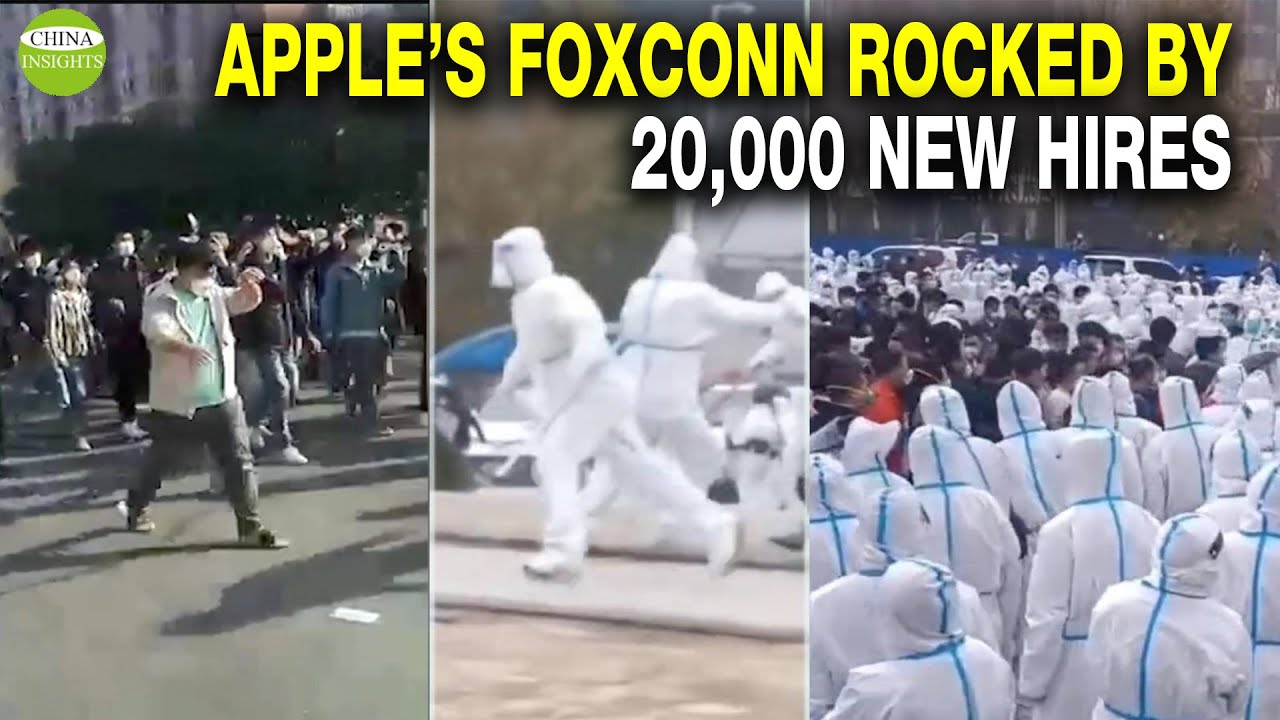 # Reuters: Clashes in Shanghai as COVID protests flare across China