I agree with me

Finally. What I’ve been saying for several months, this time from Alan Binder, Princeton Economist and former Vice-Chair of the Federal Reserve: 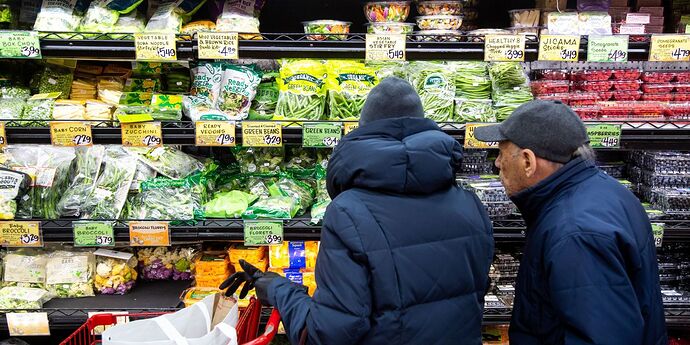 Opinion | What if Inflation Suddenly Dropped and No One Noticed?

The high year-over-year rate masks progress in the past five months. But we’re not out of the woods.

Yes, you read that right. Yet hardly any­one has no­ticed this stun­ning de­vel­op­ment be­cause of the near-uni­ver­sal con­cen-tra­tion on price changes mea­sured over 12-month pe­ri­ods, which are still 7.1% for CPI in­fla­tion and 5.5% for PCE Inflation

I looked all over and couldn’t find a single reference to “helicopter money”. Crazy, huh?

What did change dra­mat­i­cally was the sup­ply bot­tle­necks. Ma­jor con­trib­u­tors to in­fla­tion in 2021 and the first half of 2022, they are now mostly be­hind us.

But as they say, time will tell. Or not.

Well, you could just read what Kevin Drum has been saying, which I posted over here:

What did change dra­mat­i­cally was the sup­ply bot­tle­necks. Ma­jor con­trib­u­tors to in­fla­tion in 2021 and the first half of 2022, they are now mostly be­hind us.

Neon gas has been slowly to some degree replaced. But not entirely replaced by suppliers outside of southern Ukraine.

There is no exchange for Neon gas. I can not no news on the pricing.

Neon is our wild card.

I have not felt inflation in several months. I was mumbling to myself yesterday as two outdated people were talking terrible inflation.

Most inflation numbers and reporting come from a bunch of people who don’t understand much about statistics or how to present data.

Or they do - but saying everything is really OK doesn’t suit their purpose - blood sells papers and, well politicians are what they are.

What if Inflation Suddenly Dropped and No One Noticed? - WSJ

Just wait a few more months and inflation will be entirely masked. Hey, prices are up only 0.1% this month! Inflation is tamed. But prices are still up 10+% compared to 24 months ago.

Even if inflation is on the way down, it will be a long time before current prices will be seen as the new normal. And I doubt many prices will ever fall back down.

DW and I went to dinner to a place that we had not been in a few months. Dinner and 1 cocktail each cost us $100 with tip. That dinner used to cost us about $70 or so with tip about 6 months ago. DW said we need to go out to dinner less, I suggested that she get used to the new normal in terms of cost.

And I doubt many prices will ever fall back down.

Prices will never fall back down, a few commodities that were artificially high excepted. Prices rarely go down except during a severe depression.

My parents’ first home, 3 bedroom, cost $3750. That price is unlikely to be seen again unless the town is covered in radioactive slime.

Prices will never fall back down, a few commodities that were artificially high excepted. 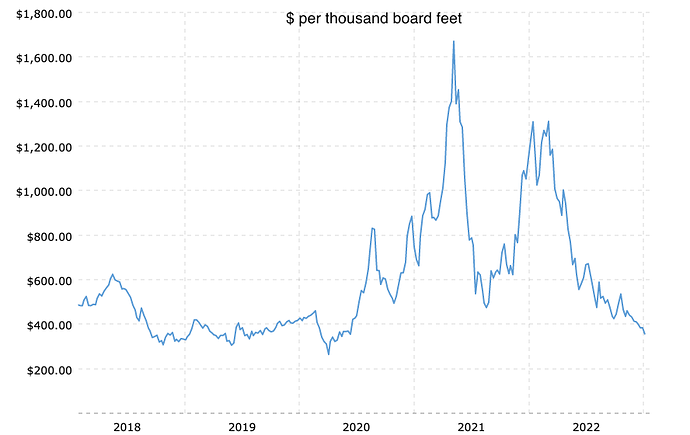 Prices will never fall back down

Inflation is the US friend? Borrow yesterday, and pay with tomorrow’s inflation dollars?

Remember the “soft landing” that the FED has stated it desires? So far, the market is drifting downward. Ie not the waterfall crash of 2000 or 1987?

The media has been fed info, and talking heads have maintained sufficient hopium that the market is landing softly?

Wow, this is really nice to see! I knew it was well off its peak(s), but I didn’t realize it’s dropped all the way back down to 2019 levels.

I guess these are wholesale prices shown in the graph, and retail will be trailing behind. Still, this drop along with a more modest decline in housing starts and I assume a larger decline in renovations/additions as Covid lets up, maybe construction costs will come back down a fair bit.

That is a very large generalization. We have left supply side econ which is all monetary policy.

In relative terms everything from here falls. But not for the retiring boomer who wanted a tax cut and now does not have a pot to bleep in. At a certain age you have capital or you do not. The majority of retirees do not have money. The workers are loving the money and want more. Labor is not the problem it is the solution as competition breeds efficiencies of scale. Relatively most people will be a lot better off.

Wow, this is really nice to see! I knew it was well off its peak(s), but I didn’t realize it’s dropped all the way back down to 2019 levels.

Yeah, except the Fed is still on its anti-inflation crusade, and as has been pointed out multiple times, none of their interest rate action has had any effect on inflation yet. The lag is about a year. All of the rise and fall has happened on its own – pandemic, supply chains, government cheese.

Once the Fed actions kick in (in the coming months) we’re pretty much guaranteed a hard recession, especially if they continue what they’re doing. At least that’s what the models of people who enjoy data say.

Note: we have had no recession declared yet.