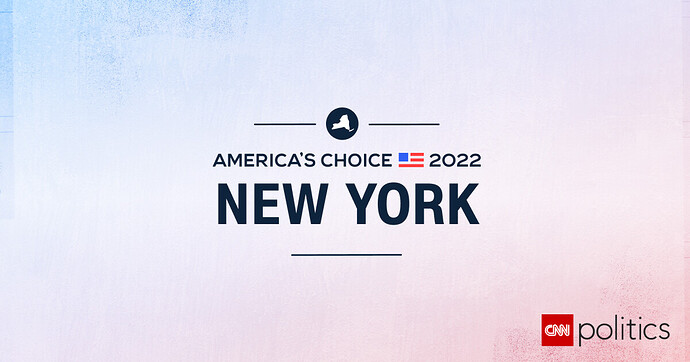 This is a “political” map of “Strongly Democratic” New York State. It is clear that there is a massive urban/rural split in party preference. New York City contributes more than half the tax revenue collected in the state.

Not making a political statement here, but simply pointing out how demographics creates stark contrasts.

It is clear that there is a massive urban/rural split in party preference.

But that has always been true. I lived in Chicago, big healthy city - with the state capital at the bottom of the state in Springfield. Same dynamic. Chicago had to go pleading for stuff, Springfield always resented it even though Chicago produced most of the tax receipts.

I’m sure the dynamic is the same - or at least similar - in states where the capital and the largest cities are so geographically distant. California: Sacramento, perhaps. Here in Tennessee it’s Nashville as capitol, but then Nashville is a real city all of its own, so it’s not the same thing.

Ditto Missouri. Its a red state with veto proof control in the state legislature. But both St Louis and Kansas City are blue areas with Democrats as Congressmen. There seems to be an urban/rural clash on many subjects like gun rights. Its a constant tension source with wide variations in views on policy and state law.

I don’t live there, but close by. It’s so small you can’t gerrymander and there’s only one real city in the entire state. The capital, Providence.

'38Packard
==> just repeating what I heard… I don’t know nothin’ about no Mob action.

There seems to be an urban/rural clash on many subjects

That is exactly what we have across the country. We really don’t have red states versus blue states anymore. We have blue cities and red rural areas with suburbs that move back and forth. Take a look at Texas by county. Most counties are firmly red, except for the cities of Dallas, Austin, San Antonio and Houston, which are blue and heavily populated. Some of the Texas GOP are openly considering moving the election of Governor and other state officials to an electoral college type system rather than popular vote. Guess why?

I have to admit, I’m not sure how you govern situations like this other than be a moderate and recognize both sides have needs and wants. But we can’t seem to elect moderates anymore.

And given the way the electoral college works, this really skews things to the right in POTUS elections.

Progress has to mean deal making. I can support your farm to market road repair if you can vote for my city project. Crossing the aisle can be required.

Historically, Michigan has been competitive for positions voted state-wide: Gov, AG, Secretary of State, Senators, but one party has had a lock on the state legislature.

Michigan has been gerrymandered by the legislature, for decades. When a suit was brought, the judge ruled the state was “gerrymandered to a historical degree”.

We The People approved an amendment to the state constitution in 2018, taking redistricting out of the hands of the legislature and establishing an independent board to handle the task. The (L&Ses) called a lame duck session of the legislature to try and undo the amendment. They failed. They also tried to make sure we uppity voters never amended the state constitution again. They failed.

The incoming State House, for the first time in decades, will flip to the other party. There are still a couple State Senate seats “too close to call”, which may, or may not, flip the Senate the same way.

The existing Gov, Sec of State, and AG, were all reelected with 10+ point margins, so the results for the state legislature correlate with the state-wide results.

It will be interesting to live in a state where the (L&Ses) have a program other than throwing more money at the “JCs”.

Steve…one of those uppity “We The People”

The jury is still out on the 218. One district with Salis in CA has that been decided yet? And one district in MD that was supposed to flip red but in both cases the younger folks voted in larger numbers. I need to study who is winning or won as of tonight. Those two were the big pickups for the reds that might not happen.

But lets assume fairly that red wins the house at least 218 or 219 seats. That is an impossible position for the reds. The far right wants will fail because the more moderate right in battle ground states will be messed up for reelection in 2024. Odds are the blues win in 2024 if the reds have the house for two years.

Meaning actually impeaching Biden is a definite loser for the reds. This picture from the visual capitalist makes absolutely clear the problems with the depiction of the political divide in America through maps. It also helps to explain how people who don’t understand geography and population density might look at a typical red vs blue political map and assume that elections must be fixed. It also demonstrates the lunacy of basing a chamber of the legislature on geographically determined political entities that bear no relationship to population. Why should territory be politically represented now that we have done away with slavery?

Only recently. They started voting republican when they became white. I’m not exactly sure when Italians became white, but I think it was during the Reagan era. I know my octogenarian father wasn’t white as a youth, (how could someone who brings and eggplant sandwich to school for lunch possibly be white) but he sure thinks he’s white now.

It also demonstrates the lunacy of basing a chamber of the legislature on geographically determined political entities that bear no relationship to population. Why should territory be politically represented now that we have done away with slavery?

Back when the Constitution was written “states” were more like “countries” (recall that we had just descended from Europe, where there were a couple dozen states/countries jammed into a smallish land mass.) States had wide discretion: some had their own state religion, others allowed or disallowed slavery, and so on.

Time moved on, but the foundational structure of the Constitution did not. One change: Senators were originally elected by their respective state legislatures (they were sort like “Kings of their state”.) But in the age of industrialization it became trivially easy to bribe a a few state legislators to influence who got elected to the national Senate, and the Constitution was changed to provide for direct election by the populace.

I doubt if we’ll ever see the 1 state = 2 senators rule changed, though. It gives too much power to rurals at the expense of the urbans. Ironically, several states which have bicameral legislatures use population density for both houses - but they wouldn’t let that happen nationally.

There’s only one state in the country with a unicameral legislature (Nebraska). All the others: common sense.

Another nice cartogram of the 2020 election: 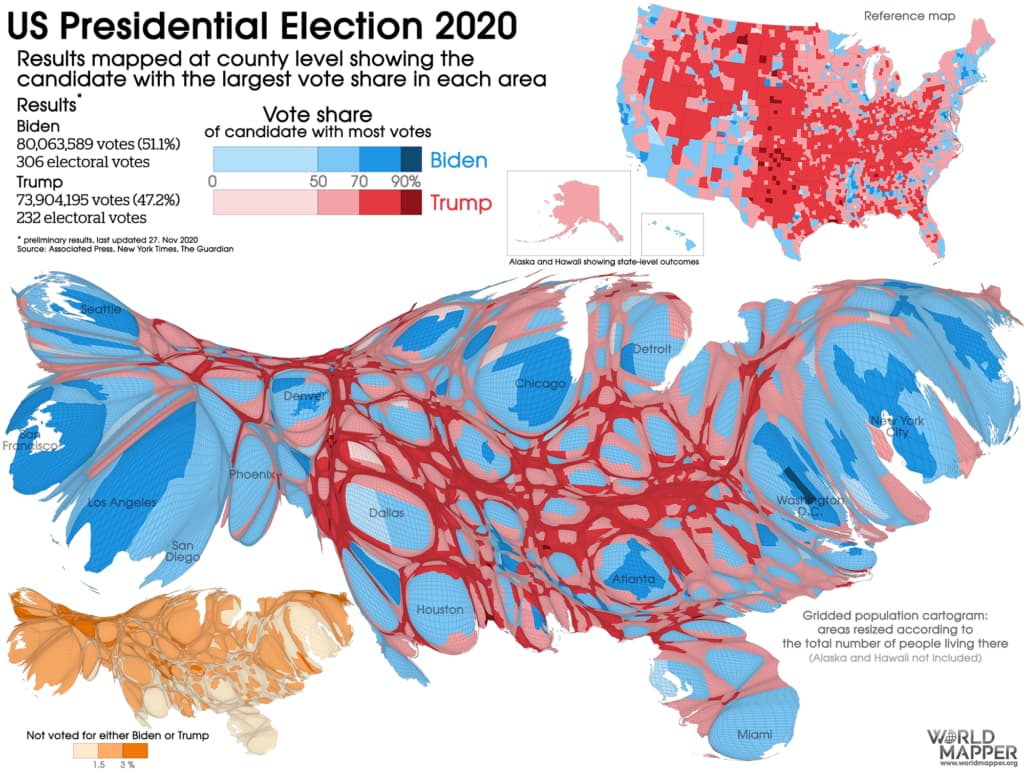 Ironically, several states which have bicameral legislatures use population density for both houses

That would be all states – for more than half a century.

That would be all states – for more than half a century.

Well, for now. Enjoy democracy while you still can. 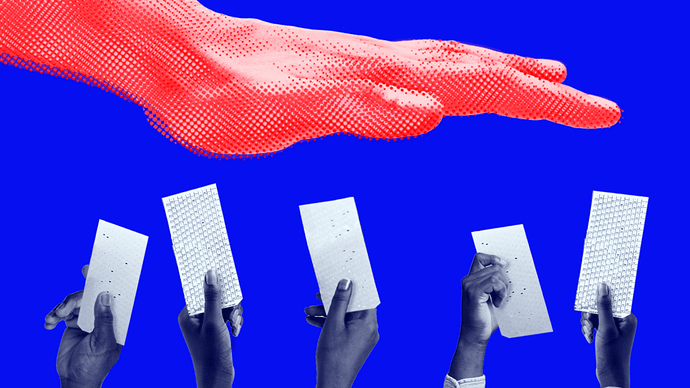 Read the latest by Democracy Docket.

Another nice cartogram of the 2020 election:

Nice comparison. One of my former coworkers keeps posting the small, non-population adjusted, one on his FB page, like dirt voted instead of people.

Ironically, several states which have bicameral legislatures use population density for both houses - but they wouldn’t let that happen nationally.

Several states used to have seats in one house distributed by population, and seats in the other house distributed geographically - like the US Senate is, on a smaller scale. The US Supreme Court told them to stop doing that, based - if I understand & remember things correctly - on a reinterpretation of one of the anti-slavery amendments.