Mish says change of subcontractors to employees not fair 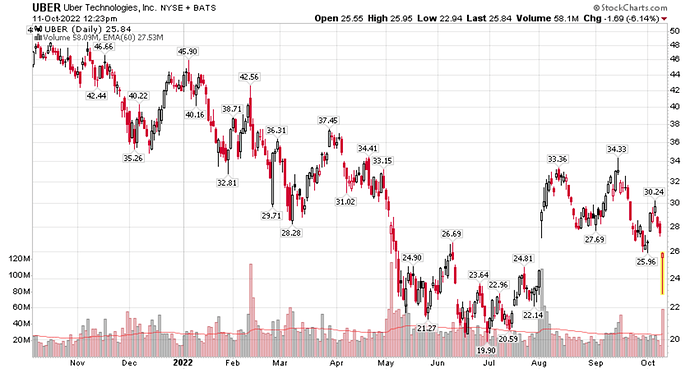 In Yet Another Inflation Creating Mandate, Biden Proposes New Independent...

The Labor Department said it would revisit rules that designate whether workers are classified as employees or independent contractors, a move that could affect millions of gig and contract workers in healthcare, restaurants, ride-share transportation, and many other industries.

Mish implies that treating part-timers as employees would be unfair - both to the employee and the companies involved.

When you cut away all the nonsense, this is all about five things:

I am aware of numerous instances where firms have arranged for nearly all their workers to be either direct contractors, subcontractors or part-timers (missing being full-time by an hour or two per week) specifically to avoid paying taxes and benefits. That the employee doesn’t receive a standard suite of benefits negatively impacts them and the tax avoidance negatively impacts the rest of us.

There is an implication in the US that if prices have to go up in order to provided a reasonable working wage and environment to employees that somehow people would stop buying the product or service. Based on the fact that the European countries which pay the most attention to providing for workers have the happiest populations despite their high cost of living it seems interesting that the US which has a population which sees nothing wrong with living without a safety net has one of the saddest of the industrialized nations.

I’m on the fence on this one.

As some may know, throughout my IT career, I have been an independent consultant, a founder and owner of a systems integration company, and have worked for a number of Fortune 500 companies in IT management roles. So I’ve seen both sides of this issue.

I remember when this was looked at last - maybe in the early 1990’s. I was an independent IT consulting working for a couple of companies on contract. I recall being somewhat nervous about what might transpire. Sure enough, what ended up happening in the IT field was to “consolidate” vendors. I was forced to “sub-contract” through IBM, Deloitte, E&Y, to name a few. I was still an “independent contractor” but now I was forced to go through a larger vendor where my billings could be through a third party - and the clients were OK with that.

I loved the independence, the ability to cut through red tape to get things done, and deliver for my customers. I also liked the idea of being an “independent consultant” who was under general management supervision - and not managed day to day. I also did not mind that I had to report quarterly earnings / estimated tax payments to fed and state. I played by the rules and everything was “on the books” as there was no way my clients would pay in cash. HAHA!

I think if these proposed changes force independent consultants to become employees, there could be some unintentional consequences.

First, I think that the idea of getting more of our economy “on the books” is a good thing for everyone. I also agree that many Independent contractors charge less because they skimp on benefits for themselves / family - like healthcare, IRA/SEP, vacation time, etc. and this proposal would help those people by forcing them to pay for benefits. All good…

But I also look at the role of an independent consultant - one who comes in to do a bit of specialized work, at a higher price than employees, to get the job done. And I’m skeptical that this will allow independent contractors the freedom and latitude to perform for the end client. I see potentially, more employees - drudging along - day after day. (Not that ALL employees drudge along all day - every day - but I’ve seen plenty in my career!)

So, I do think that Independent contractors have a specific role to play in an organization and I hope that those roles do not go away. I think it would not be beneficial for companies that want to move fast and/or innovate in the long run.

I don’t think this is the end of the independent contractor, but rather an attempt to address the hordes of “employees except by the choice of the employer” who are in a structured relationship designed specifically to deny them benefits. It also would presumably address those employees who seek the contractor relationship so they won’t have to pay specific taxes based on which state they live in compared to where the office is located.

I don’t think this is the end of the independent contractor, but rather an attempt to address the hordes of “employees except by the choice of the employer” who are in a structured relationship designed specifically to deny them benefits.

Excuse me sir, but did you read the linked article?

Quoted from the link:

Also consider this sentence: "Finally, the provision provides that “[t]his factor weighs towards the individual being an employee to the extent the individual is unable to affect his or her earnings or is only able to do so by working more hours or faster.”

This broad language seemingly applies to everybody including contract programmers. I stopped reading at page 78 of 184, confident that the changes are meant to apply to nearly every business imaginable.

Want to Work for Yourself?

Perhaps you will not be able to.

California has gone after independent truckers and no doubt these changes are an attempt to impose California rules on everyone.

I think there’s more to the story than what you may have been lead to believe. I’m not a huge fan for more government at the expense of innovation, and this seems like an innovation killer to me.

There is another way to put this, the lower rungs of the ladder are subcontractors to deny them pay.

What is wrong with seeing to their needs? We have seen to everyone else’s needs. Are we just out to have poorer people used? I wanted to use another word but…wont.

Several years ago, some muscle hired by a bank, arrived at my condo, with the intent of breaking the lock, clearing all my belongings out and hauling them away, and installing a new lock.

Who would be liable? The bank, or the contracted muscle?

Fortunately, I had retired three months before, so I was home to point out the muscle had the wrong address. I never had to call the bank and hear “they are independent contractors, we aren’t liable”

Also consider this sentence: "Finally, the provision provides that “[t]his factor weighs towards the individual being an employee to the extent the individual is unable to affect his or her earnings or is only able to do so by working more hours or faster.”

I haven’t read the proposal (got much better things to do with my time than read proposals which are unlikely to be put into place), but my educated guess is that this is talking about the ability to actually negotiate compensation and the ability to contract for more than one company at a time. These are things currently looked at when making the determination if a worker is an employee or a contractor.

These are all just weights on a scale. None of them are bright line tests. There are other weights to consider that may fall on the other side of the scale.

[Quoting Mish]
Want to Work for Yourself?

Perhaps you will not be able to.

That is just sensational fear-mongering designed to attract readers. It is hyperbole. It is the equivalent of a sound bite trying to attract attention solely because the attention is what is needed to generate revenue for the writer. And sensational lines like this do a much better job of attracting attention than boring, simple, factual statements.

I used to have quite a bit of respect for Mish’s writings. That respect has been waning away.