NYT: Russians Are Terrified and Have Nowhere to Turn 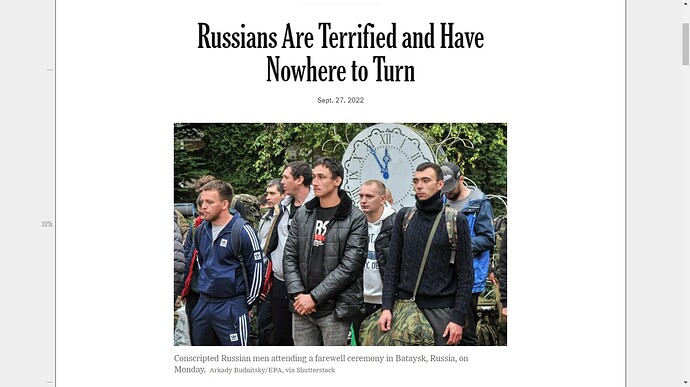 For regular citizens who want to escape that hellish fate, there simply aren’t many options. Some people have crossed into Belarus, but we are already getting information that the Belarusian authorities, complicit with Mr. Putin, are planning to seize men from Russia. If not Belarus, where? Just days before the start of the mobilization, Latvia, Lithuania, Estonia and Poland imposed an entry ban on almost all Russians. Last week, the Baltic States declared that this decision will not change, at least for now.

The thousand-mile border with Ukraine is, of course, closed. The Finnish authorities are still letting Russians in, but one needs a passport and a Schengen visa — something held by just a million Russians. Finland is planning to close the border, too. What remains open is Georgia, where the queue at the border crossing is more than 24 hours long and people are occasionally denied entry without any obvious reason. There are also destinations as far-flung as Norway, Kazakhstan, Azerbaijan and Mongolia. Getting to any, by foot, bike or car, is a daunting undertaking with no assurance of success.

Airplane tickets to the few destinations still available to Russians, after the bulk of European airspace was closed off in February, are almost sold out. You want to fly to neighboring Kazakhstan? Here’s a ticket, with two layovers, for $20,000. Want to go to Armenia? No tickets left. Or to Georgia? Russia used to have daily direct flights to Tbilisi before the conflict in 2008, but now you cannot fly there, either.