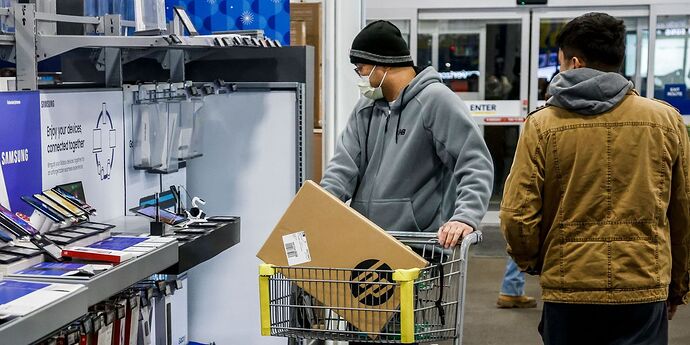 Semiconductor companies are slashing production plans to try to restore balance between supply and demand.

The world is now awash in chips.

The oversupply marks a sharp turnaround from a global shortage during two years of supercharged demand. Consumer appetite for electronics has weakened against a backdrop of rising interest rates, a falling stock market and recession fears. Chip inventories are swelling, mirroring what is happening in the wider economy where retailers are stuck with goods on their shelves and producers of a range of products in high demand early in the pandemic now face a glut…

Despite the near-term glut, chip executives are preparing for a long-term rise in demand for chips that will require them to build more factories. Industry executives expect chip sales to roughly double by 2030, surpassing $1 trillion globally…

Some chip makers see the inventory buildup as an opportunity. While makers of CPUs at the heart of PCs need to deliver their product before a new, more capable version is introduced, others make chips that won’t fundamentally change for years…[end quote]

The new Federal budget includes stimulus for building new semiconductor plants in the U.S. for strategic reasons. Will this be good or bad for industry profits in the long run?

If done for “strategic reasons”, then the govt has already signaled it is prepared to pay “strategic prices” to keep those plants running. As “strategic pricing” is massively profitable, the plants will run as long as the govt keeps paying for the output.

I’m sure I’m probably just suffering from information overload but wasn’t there a chip shortage just a few months ago? Or a potential shortage looming because of China/Covid/supply bottlenecks/inflation… blabbity… blabbity… Or am I thinking of another shortage that we were supposed to see coming but nobody did? I know there has been a shortage of regular peanuts at the supermarkets the past 3 weeks. Nothing but the dry roasted kind. Who the hell eats those? Damned supply chain!

I’m sure I’m probably just suffering from information overload but wasn’t there a chip shortage just a few months ago?

Since many of the most advanced chips come from China, the supply chain bottlenecks caused by Covid prevented shipments. Now that the bottlenecks have been relieved there is a pulse of chips meeting the sudden drop-off of consumer demand for electronics.

And the chip shortage held back auto production emptying dealer lots and causing people to pay sticker price or more.

That backlog should be over. Auto companies should be restocking–just in time for the recession.

wasn’t there a chip shortage just a few months ago?

There is–and isn’t. Depends upon which chips you want/need. Expect vehicle chips to become available 2023-2024. Then those backlogs of pre-built cars (less essential chips) will be completed and sold. Or were they pre-sold (don’t know)? Lots of other stuff also need chips, but they may be (re-)designed to use other (i.e. available NOW) chips rather than what was supposed to be available now. We will see.

Maybe, maybe not. In general, at least lately, I’ve been trying to use ETFs for industry-related trends, rather than using individual stocks. So if semis are down and out right now, and you expect it to recover soon, then perhaps a semi etf (like SOXX or XSD) is a better choice.

My most recent example of doing this is regarding the electrification and clean energy play. This includes EVs, windmills, heat pumps, etc. What those things all have in common is copper. So I’ve been building up a position in COPX over the last half year.

Since many of the most advanced chips come from China, the supply chain bottlenecks caused by Covid prevented shipments. Now that the bottlenecks have been relieved there is a pulse of chips meeting the sudden drop-off of consumer demand for electronics.

Most of the advanced chips come from Taiwan. China is making 7 nanometer chips while TSM is now at 3 nanometers. Warren Buffet has been buying TSM and TSM is starting to build a plant in Arizona due to the Chips act. Chips are very cyclical so it pays to keep your eye on the cycle we are in. Going into a recession we will probably see lower prices still.

We had a thread like this a few weeks ago.

This smells very much like the day after Thanksgiving, 2000. During the truncated market session that day, Broadcom issued an earnings warning. Seemed it’s revenue for the quarter was coming in below projection.

That was only the first warning.

Seemed that, in the very tight chip market, at the peak of the tech bubble. chip users had been double and triple ordering, often using multiple vendors, where possible, in the hope that someone would deliver on time. By late 2000, production capacity caught up with demand, and the redundant orders, on which the chip makers had based their forward guidance, were being cancelled.

Wider implications? Every Shiny “JC” has been exploiting the “shortage” narrative to juice prices and profits. Automakers have reverted to encouraging customers to order cars, rather than buy off the lot, as there is little to nothing on the lot to choose from.

Ford brags about it’s order book. I have read accounts of people who ordered a Ford SUV or pickup, and waited months for delivery. Apparently, Ford dealers are often not demanding a hefty downpayment on these orders, confident they can move the car, at a hefty profit, if the customer ghosts them. What if the customers are ordering from multiple dealers, maybe multiple brands, and, as supply increases, progressively greater numbers of those orders, end up cancelled, as the customer got a car somewhere else, and the basis of the car company’s forward guidance collapses?

Intel announced an assortment of cost-reduction efforts aimed at $3 billion in
cost savings in 2023, growing to $8 billion-$10 billion annualized by the end of 2025. When earnings are a function of layoffs, it’s not a good sign going forward. AMD and Nvidia are also creating market share losses amid Intel’s production delays.

Possibly by March but the market in 2023 is not going to have a V bottom and run away from us. You have all of 2023 take your time.