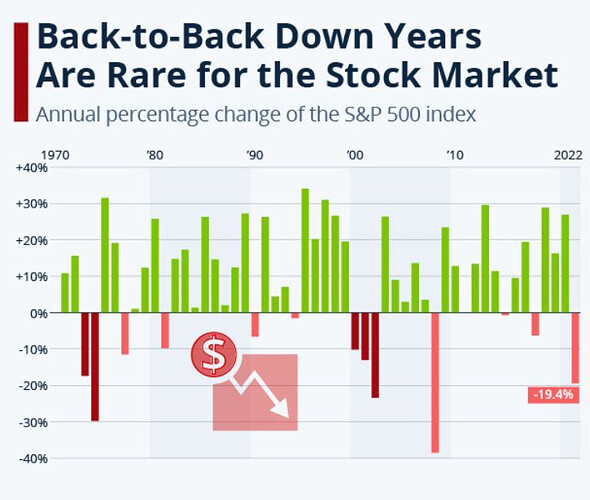 Very interesting graph, thanks for that …doc

There were 12 down years excluding 2022 in the last 52 years. Three of the down years were followed by down years. I don’t call a 1 in 4 event rare.

You are doing funny math. You should count all years, not just down years. Why you think only counting down years is relevant?

Because after the first down year occurs, the math changes. Nothing funny about it.

Similar to the faulty logic sports announcers use when college basketball team A is about to play team B for the third time in a season. Given that team A has beaten team B in their first two encounters, the announcers always say, “It’s really hard to beat the same team three times in one season!” whereupon they expect team B to win the third matchup.

Yes, it’s hard to do before the first of the three games has been played. But after the first two wins for team A, not so hard!

A branch of math known as conditional probability.

I am not sure how conditional probability is valid here. Let us say, the chances of a down year for the market is a random possibility, but previous down year(s) actually reduces the probability to have another down year.

[quote=“Kingran, post:7, topic:86024”]
Let us say, the chances of a down year for the market is a random possibility, but previous down year(s) actually reduces the probability to have another down year.

I am not sure how you can have a down year as a random possibility if a previous down year reduces the possibility. It reads to me that the down year is not a random event.

Back at the original chart which said back to back down years is rare. I would agree that if there has not been a down year in the last year, the two forward years being down years is a rare event. However, we have had a down year, so a subsequent down year is not that rare as the first half of two down years in a row has been accomplished.

One more helpful way to look at this simple chart is:

The heights of the bars is more important. Down years function as a cleansing function to get rid of excess.

My view is that other than tech, there was not much excess in the stock prices. The tech excess has been significantly weeded out, lower stock prices, layoffs/hiring freeze, venture funding.

There maybe more pain ahead in next 2 quarters but overall it seems like 2023 will end but being a small green bar.

As a long term investor, it is important to stay invested and not jump in and out of the market.