It is an interesting conceit that opposition to aggression is only justified if it is profitable in dollars and cents.

Read my reply to syke6 about how our defense procurement system & political system is corporate controlled. But you know this.

This war is not close to the ending. And if the war goes south on Zelensky I doubt he will hesitate in requesting bodies from the US & NATO. Then what?

We’ve been building up our military for decades with the express purpose of defeating the Soviet Union, now Russia. And now we have the opportunity to accomplish that, not with our own soldiers, but with capable and motivated soldiers from another country.

The only wrinkle is that those soldiers are outnumbered and need to inflict casualties at something like 5:1 or higher. That is possible with the right arms and training. We happen to have those arms and can provide the training.

Seems to me the most prudent course of action is to supply those arms along with the necessary training and achieve the goal we’ve been working towards since the 1950s.

To directly answer your question above, the best way to deal with Ukraine asking for soldiers as well as arms is to make sure they have enough arms to keep them from having to ask for soldiers.

Send them what they need and encourage our allies to do the same.

the number of Americans who believe the U.S. is doing too much for Ukraine rose from 6 percent in March to 30 percent in November.

The 6% is hard core. The 30% is a partisan number just to stick it to other people. November.

Reality is most of the 30% do not really care.

There is no doubt who the aggressor is in Ukraine. It is an interesting conceit that opposition to aggression is only justified if it is profitable in dollars and cents.

We stopped in Yemeni and are constantly calling of SA in Yemen. That is a loss of dollars and cents to us potentially.

The munitions and equipment will need to be replaced. That will require more government revenue expenditures…so more taxes.

Yes and no, the military needs more updated or upgraded supplies either way.

What is being sent over to Ukraine is just stuff mostly sitting around.

So presumably we’re just sending the ones that Pentagon doesn’t want and they don’t need to be replaced either.

Nope. According to the ABC evening news, and a piece I saw on the wire, the M1s going to Ukraine will be new production. It will take a year to build them, and probably that long to train the Ukrainians to maintain those overly complex, overly expensive, pieces of hardware.

That works out with what the French, Germans and English are doing. Gives more weaponry to Ukraine later on. It will be needed in all likelihood.

That works out with what the French, Germans and English are doing.

My thinking is, besides “creating jobs”, at GenDyne, it delays delivery in the hope the situation goes away in the interim. The M-1 is a terrible choice, because of that turbine engine, for one. The Leopard and Challenger putz along just fine with diesels that Ukrainians know how to work on.

The US had to commit to give cover to the allies to commit.

The Russians being outplayed in the laws of numbers.

According to the ABC evening news, and a piece I saw on the wire, the M1s going to Ukraine will be new production.

They should have announced this a couple of months ago in time for Tanks Giving.

Yes I read somewhere that Germans would not give permission to other nations to release their Leopard tanks until the US committed to give M-1 tanks to Ukraine.

“the M1s going to Ukraine will be new production.”

I wonder about the above as we have many older models of the M-1 tank available. 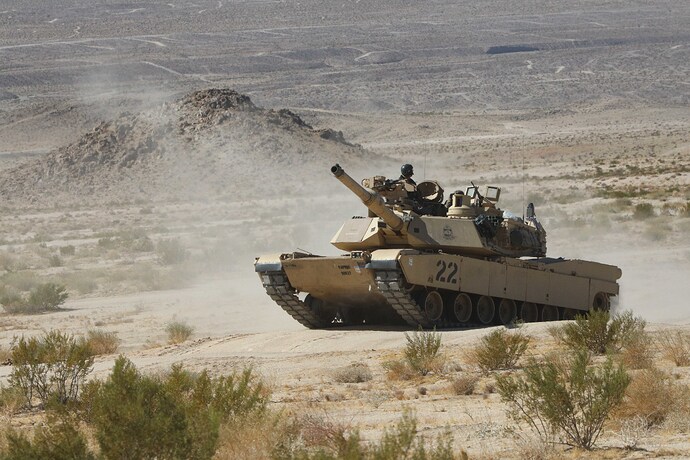 The U.S. is planning to send Kyiv the Abrams main battle tank in its more advanced M1A2 configuration, rather than the older A1 version that the military has in storage, according to three people with knowledge of the deliberations.

But the 31 tanks slated for Ukraine will not include the secret armor mix that makes the Army’s newest version so lethal, said the people, who spoke on condition of anonymity to discuss sensitive conversations.

But the 31 tanks slated for Ukraine will not include the secret armor mix that makes the Army’s newest version so lethal, said the people, who spoke on condition of anonymity to discuss sensitive conversations.

Some Brits have been complaining about the Challenger IIs being sent, due to their state of the art armor. Some Brits keep casting an eye on the nearly 400 Challenger Is that Jordan just retired. 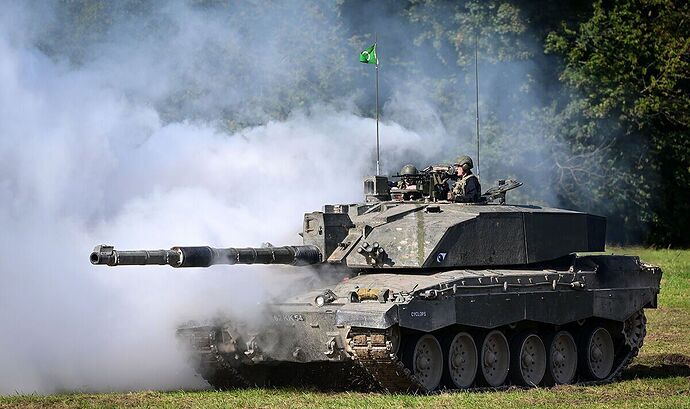 UK warned it is sending 'wrong tanks' to Ukraine

Robert Clark, director of defence and security at Civitas and a former British Army soldier, says Challenger 1 tanks should be sent to Ukraine, not the Challenger 2.

It could be that the US was forced to commit to giving Ukraine the M-1 by Germany. The US uses the armor argument so that they prolong the introduction of the M-1 to the Ukraine War in the hope that NATO are sufficient to turn the tide. I believe the US wishes to prolong the bleeding to drain Russia. I question whether the piddling number of tanks promise are sufficient in number though I zero expertise in the conducting of a war.

Now that the Ukrainians got the tanks. They want f-16s. 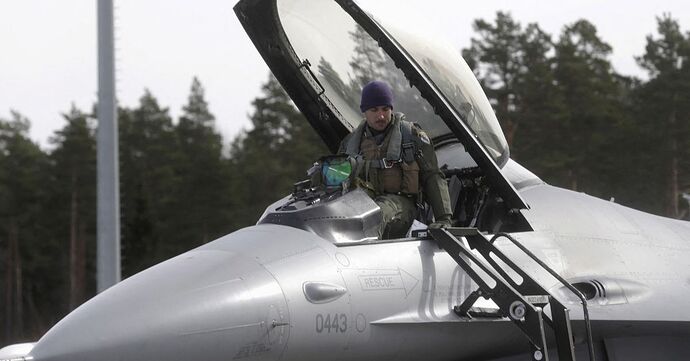 Ukraine will now push for Western fourth generation fighter jets such as the U.S. F-16 after securing supplies of main battle tanks, an adviser to Ukraine's defence minister said.

Has the US passed threshold of being considered a belligerent?
We certainly aren’t neutral. I wonder what international law has to say? I suppose as long as our troops do not operate the supplied weaponry we are clean. 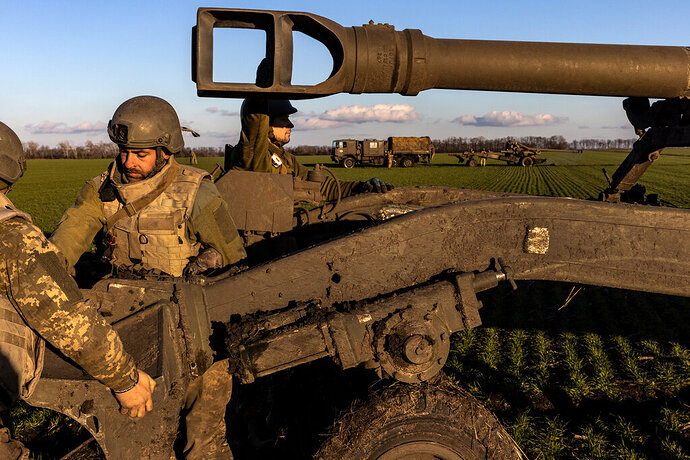 The Army’s top acquisition official says production of the 155-millimeter shells badly needed by Kyiv will rise to 90,000 a month in two years.

The Pentagon is racing to boost its production of artillery shells by 500 percent within two years, pushing conventional ammunition production to levels not seen since the Korean War as it invests billions of dollars to make up for shortfalls caused by the war in Ukraine and to build up stockpiles for future conflicts.

The new investment in artillery production is in part a concession to reality: While the Pentagon has focused on fighting wars with small numbers of more expensive precision-guided weapons, Ukraine is largely relying on howitzers firing unguided shells.

Before Russia invaded Ukraine on Feb. 24, the U.S. Army’s production of 14,400 unguided shells a month had been sufficient for the American military’s way of war. But the need to supply Kyiv’s armed forces prompted Pentagon leaders to triple production goals in September, and then double them again in January so that they could eventually make 90,000 or more shells a month.

The Army’s decision to expand its artillery production is the clearest sign yet that the United States plans to back Ukraine no matter how long the war continues.

Yep we are willing to fight to the last Ukrainian. So I guess the Ukrainian’s fate will not be the same as the Montagnards, South Vietnamese, or Kurds. All former allies.

By the end of World War II, the United States had about 85 ammunition plants, according to a congressional report from late last year. Today, the Pentagon relies on six government-owned, contractor-operated Army ammunition plants to do most of this work.

The military’s ammunition infrastructure “is comprised of installations with an average age of more than 80 years,” and much of it still operates in “World War II-era buildings, and in some cases, with equipment from the same period,” according to the Army’s report on modernizing those facilities, which was drafted in 2021.

“The Russian invasion of Ukraine has really exposed how brittle and fragile our supply chain is, particularly as it relates to munitions

The Ukrainians have been firing so many artillery barrages that about a third of the 155-millimeter howitzers provided by the United States and other Western nations are out of commission for repairs.

Has the US passed threshold of being considered a belligerent?
We certainly aren’t neutral. I wonder what international law has to say?

To the extent that there is an international law on the topic, who enforces it and what is the punishment?

To the extent that there is an international law on the topic, who enforces it and what is the punishment?

Well there is the UN. But it is largely the creature of the USA.

US is doing Ukraine no favors by giving them the M-1 tank.

A battalion of 58 tanks requires dozens of support vehicles and hundreds of soldiers to keep it running—a formula known in military circles as the tooth-to-tail ratio. Those could include armored ambulances, command vehicles, maintenance trucks, and trucks to tow disabled tanks. The trucks have to haul fuel, ammunition, lubricants, engine oil, hydraulic fluid and extremely heavy spare parts.

“If we gave the Ukrainians tanks and we didn’t give them everything they need to support them logistically, then we would hardly be doing them any favors,” he said. “There’s a whole lot that needs to drag behind a tank to keep it moving.” 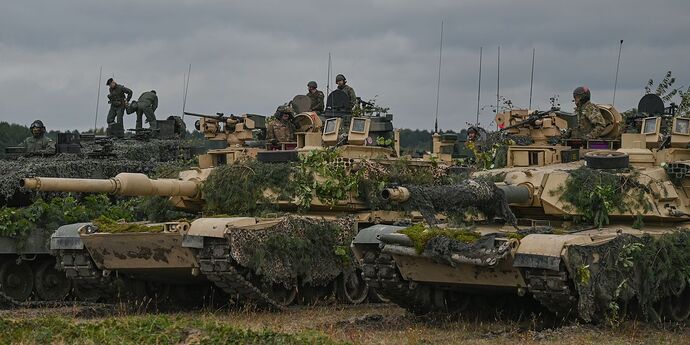 What Makes the M1 Abrams So Critical to the Russia-Ukraine War?

The M1 Abrams tank is among the most powerful ground weapons in the U.S. arsenal.

It could be that the US was forced to commit to giving Ukraine the M-1 by Germany. The US uses the armor argument so that they prolong the introduction of the M-1 to the Ukraine War in the hope that NATO are sufficient to turn the tide.

That is what I suggested above, delay delivery as long as possible, in the hope the situation goes away. Amanpour has talked with several people about the tank issue, and the consensus, as she put it is “The M-1 is not fit for purpose”. It’s too complex, too different from everything else, and too fuel hungry. No-one would be able to support a handful of those things, in a theater where they have hundreds of other tanks operating. Of what is available, Leopard is the first choice, and what Ukraine has been asking for.

I wish we could be more belligerent towards Putin. Do you have suggestions for how?