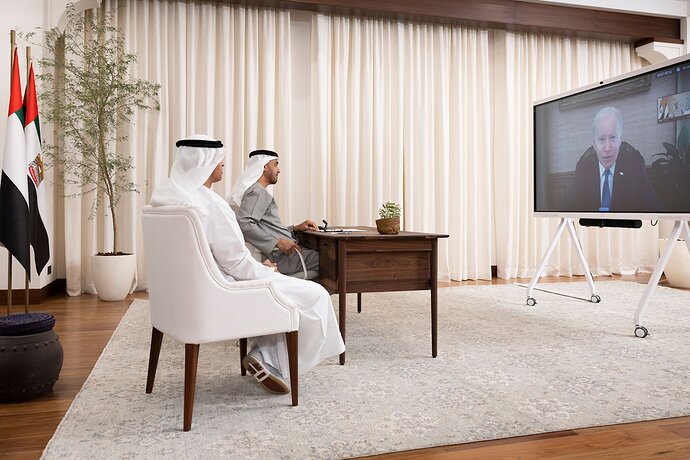 The United Arab Emirates steered U.S. foreign policy in its favor through legal and illegal exploits, according to an unprecedented intelligence report.

The document was compiled by the National Intelligence Council and briefed to top U.S. policymakers in recent weeks to guide their decision-making related to the Middle East and the UAE, which enjoys outsize influence in Washington. The report is remarkable in that it focuses on the influence operations of a friendly nation rather than an adversarial power such as Russia, China or Iran. It is also uncommon for a U.S. intelligence product to closely examine interactions involving U.S. officials given its mandate to focus on foreign threats.

One of the more brazen exploits involved the hiring of three former U.S. intelligence and military officials to help the UAE surveil dissidents, politicians, journalists and U.S. companies. In public legal filings, U.S. prosecutors said the men helped the UAE break into computers in the United States and other countries. Last year, all three admitted in court to providing sophisticated hacking technology to the UAE, agreeing to surrender their security clearances and pay about $1.7 million to resolve criminal charges. The Justice Department touted the settlement as a “first-of-its-kind resolution.”

I don’t think this is news. Perhaps two dozen nations have the resources to do this sort of think to keep an eye on what the US is up to. No doubt they have embassies and ambassadors to present their point of view to govt officials. Many do not make overt efforts to influence elections but they are very capable of planting news stories that are favorable to their point of view and have the clout to get them published.

Remember that one of our guys was convicted of spying for Israel. There is probably lots more like that that does not make the news.

That is your bias.

I am not a fan of the Israeli government. The surveilling of nationals with Israeli software is well know and disapproved of in the US. To the point where laws intandem with the EU may pass. Diplomatic discussions with Israel over the software are happening on the highest levels. Surveillance software can be made by any sophisticated player. Which means targeting Israel alone wont work. Instead laws and possibly even an amendment to the US Constitution will probably be very necessary.

Israel and the US have led the way in such technologies. Within democracies this must end. Exporting these abilities to dictatorships must end.

The question is where to draw the line for snooping. The answer is to assign property rights to information. Then to enforce government warrants for seizing property.

And to go the next step and insist on the western world assigning property rights to non citizens around the world.

Israel has spied on the US for years. Remember Johnathan Pollard? A lot of Israeli influence being exercised in plain sight. Ever notice that just about every USian candidate for POTUS makes a pilgrimage to AIPAC to pledge fealty to Israel?

This is ancient news. It was meticulously documented in Seth Abramson’s “Proof of Conspiracy”, the second of his three Proof books, published in 2019.

xhttps://www.amazon.com/Proof-Conspiracy-International-Collusion-Threatening/dp/1250256712
(remove the leading x to get the actual link)

From Publishers Weekly: “[Proof of Conspiracy] alleges a ‘Red Sea Conspiracy’ hatched in 2015 by Crown Prince Mohammed bin Zayed of the United Arab Emirates and then Deputy Crown Prince Mohammed bin Salman of Saudi Arabia. Their plan…was to illicitly help *****'s presidential campaign in order to gain his support for a ‘grand bargain’ that would end U.S. sanctions on Russia in exchange for Vladimir Putin’s help in evicting Iran from Syria, pave the way for dozens of new Saudi and Emirati nuclear plants, and forge an anti-Iranian, pro-Israeli military alliance among Sunni Arab nations…[Abramson] traces labyrinths of murky ‘ties,’ meetings, and business deals…[and offers] serious criticisms of *****'s foreign policy, including his support of the Saudi regime’s brutal war in Yemen.”

Massively footnoted and factchecked. If you want to keep up with the latest of the outrages of ***** and his cronies, follow Seth on Twitter, or sign up for his Proof substack.

Thank you for the link to the book. I hope the DOJ is going to do their job.

All of our allies spy on us. And us on them. That does not make them adversarial. Or us adversarial to them.

The problem is how much democracy do we or they have?

If Israel was in an easier region I am sure things would be better for everyone. Well except that the surrounding area now bitterly but truly has a leadership in Israel being democratic. It is a friction that the dictators need to bring them down at some point.

The UK spies, the French spy, the Dutch spy…name who does not spy on the USA? It is only information gathering. It is not espionage. Unless the spy goes rogue and sells the information.

Pointing out Israel, there was one major case that mattered decades ago.

All our other allies are acting very similarly to Israel. The lobbies from the UK and EU, Japan and SK, Australia all want things of our government. Since all of them are allies we often oblige them. We have a entirely new military set of obligations to Australia. If Australia was Jewish would we make something of that? Germany after WW II became the most expensive proposition we ever faced helping them rebuild. The Europeans got far more aid per capita than Israel ever received. Japan as well. The entire Korean Conflict on many levels more blood and money than ever given to Israel.

What do all the nations in the west get from Israel? Their tax coffers are filled in good part by Israeli innovations that are taxable in their respective countries. Innovations in medicine, communications gear, military hardware, computer systems, pharma and much more…What does Israel really get? Equipment that is a profit center for American made military hardware mostly. Hardware the Israelis often go to the effort to improve for the American manufacturers.

Those Israeli contributions help make economic efficiencies in the west that add untold wealth to our societies.

If all you see is the bad, then you are missing the entire context.