Visual Capitalist shows a moving picture of the largest-cap companies from 2000-2022. 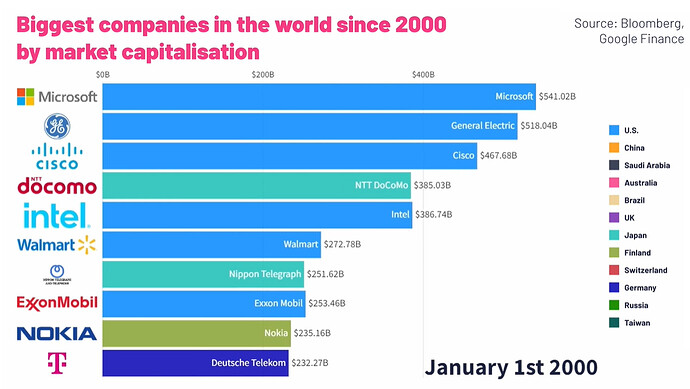 This animated graphic provides a breakdown of the world’s top ten largest public companies from 2000 to 2022.

It’s interesting to watch as companies come and go. General Electric vanished from the list after the 2009 financial crisis due to mismanagement. Chinese companies appeared and disappeared. Saudi Aramco suddenly appeared out of nowhere at the top of the list. XOM, once at the very top, fell off.

Which will stay? Which are overvalued and will go >poof!< with time?

It’s interesting to watch as companies come and go.

When people talk about ‘inequality’ they ignore that personal wealth is as mobile as corporate wealth, at least in America.

Many top dogs are recent arrivals: