War in Ukraine Likely to Speed, Not Slow, Shift to Clean Energy

The energy crisis sparked by Russia’s invasion of Ukraine is likely to speed up rather than slow down the global transition away from fossil fuels and toward cleaner technologies like wind, solar and electric vehicles, the world’s leading energy agency said Thursday.

While some countries have been burning more fossil fuels such as coal this year in response to natural gas shortages caused by the war in Ukraine, that effect is expected to be short-lived, the International Energy Agency said in its annual World Energy Outlook, a 524-page report that forecasts global energy trends to 2050.

Instead, for the first time, the agency now predicts that worldwide demand for every type of fossil fuel will peak in the near future. 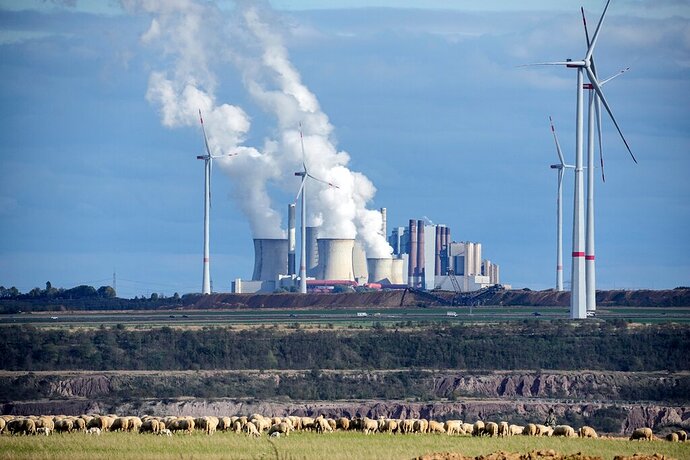 While some nations are burning more coal this year in response to natural-gas shortages spurred by Russia’s invasion of Ukraine, that effect is expected to be short-lived.

In econ it is known as substitution when a good costs less than another and really in this case does a much better job.

In layman’s slang a “no-brainer”.

This is fantasy. If I was in a war zone or under threat of a war zone and where large groups of people are homeless, hungry, desperate for food, shelter and clothing and clean water, my focus would be on any kind of fuel to burn for heat and cooking and cars/trucks/military vehicles. You have to have freedom first before all this clean energy makes it. I don’t see it ever happening frankly.

The war does provide incentives to invest more in green alternatives. And that should accelerate adoption of green energy.

Substitution due to lower cost of energy from fossil fuels comes from climate change denial. If storm damage and drought is an indicator of things to come, the cost of climate change will be huge. That should be included in those calculations.

Carbon tax of some form is one way to put climate change into the cost equation.

I think the focus here is on people NOT in the war zone. Because of the disruptions caused by the war, people outside the war area are seeing some added incentives to change the source of the energy they use.

(I’m still wondering, though, how pointing out that the climate has been changing continuously for a few billion years qualifies as “climate change denial.”)

(I’m still wondering, though, how pointing out that the climate has been changing continuously for a few billion years qualifies as “climate change denial.”)

It is really called “human cause climate change” !

Well I should amend my comment to say that between being warm or freezing, I’m going to burn anything I can. It’s basic self preservation at all income levels or no income at all.

While higher prices incentivize switching, they also result in more production so that we see, for example, more fossil fuel projects in Africa. Down the road this will lead to lower prices, particularly after the war is over.

The WEO reports also says that
“As markets rebalance in this scenario, the upside for coal from today’s crisis is temporary as renewables, supported by nuclear power, see sustained gains. As a result, a high point for global emissions is reached in 2025.”
Global emissions will peak in 2025? That’s a pretty audacious statement.

While higher prices incentivize switching, they also result in more production so that we see, for example, more fossil fuel projects in Africa. Down the road this will lead to lower prices, particularly after the war is over.

Human beings are going to extract every molecule of energy they can - in the long run. Nobody is going to sit around and freeze to death “to save the planet.” If we run everything from solar or wind or water or whatever, there are still going to be societies which use carbon energy from other sources, and that will be forever, especially and including after wars and other destructions which render newfangled energy production useless.

So it’s a dystopian hellscape - eventually. The best we might hope for is a slow down of the process to let more generations of humans exist before it all goes toes up.

Goofy ~ generally an optimist, except in this case because in the long run, as was famously said, we are all dead.

Well I should amend my comment to say that between being warm or freezing, I’m going to burn anything I can. It’s basic self preservation at all income levels or no income at all.

You are still missing the original point. Dependence on Russian oil and gas is causing the freezing. Before the war Russia was the largest oil exporter in the world and by far the largest gas exporter. Now those supplies have been disrupted, prices have skyrocketed, helping to spur inflation across the global economy.

Before you say “Drill, baby drill!” The US is net oil and gas exporter. U.S. Energy Information Administration - EIA - Independent Statistics and Analysis

A disruption in supply anywhere causes high prices everywhere. We cannot insulate ourselves from the world economy.

Recently, Putin, Nicolás Maduro (ask @captainccs for his thoughts on that guy) the murderous dictator Mohammed bin Salman along with a host of other unsavory characters decided to put the screws to the United States and the rest of the world by colluding to keep oil prices high. Every time you fill up at the pump those extra high prices are helping Putin buy missiles from Iran.

Now those supplies have been disrupted, prices have skyrocketed, helping to spur inflation across the global economy.

Love ya but no!

Turns out European NG in storage was 80% full last year about this time. Today it is 90% storage full. Turns out NG’s global price has been falling.

The invisible elephant is in the room. Iran is supply Europe through Turkey and Iraq.

Our press is being very sensitive to negotiations currently and not discussing it. 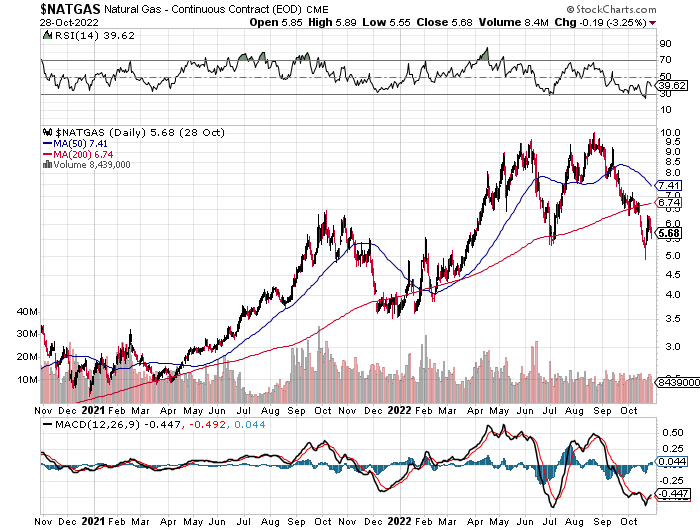 Before you say “Drill, baby drill!” The US is net oil and gas exporter.

Correct! We are already “energy independent”. And it does no good.

For decades now when oil was cheap we refused to develop an alternative “because oil is cheap”. And when oil spikes we say “but the alternatives are not ready!”.

It’s maddening. And it is destroying the climate.

Are we looking at the same chart @Leap1? Looks like nat gas prices are currently up about 25% since the start of the war, and were a lot higher this summer.

Yep same chart, it is called a double top.

The price is down well off its highs. The last bottom is down through some support.

The price is up a lot since the beginning of the war. This is contributor to global inflation.

And the price of oil was up before the war. I remember making some decent option money as oil went from $75 to $90 early in 2022.