WSJ: How Tik Tok Became The World's Most Popular App 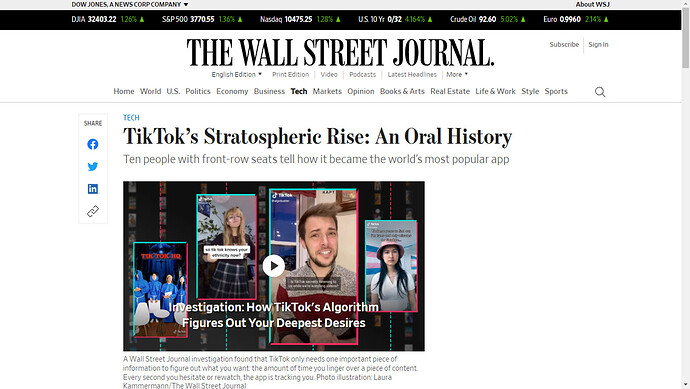 In just five years, TikTok has exploded into a pop-culture phenomenon as well as a geopolitical flashpoint. It is the world’s most popular app, used by two-thirds of American teens. Its uber-catchy—some would say addictive—short-video format has left Silicon Valley scrambling to catch up and made instant fame more accessible than ever.

Just as remarkable: Its future remains uncertain, as U.S. officials from both parties see the Chinese import as a national-security threat and advocates for protecting children online warn about its negative effects on its millions of young users.

One thing is certain: The world has never seen anything quite like TikTok. Here’s how it took off, from interviews with those on the inside and others who have been along for its short, turbulent, exhilarating ride.

Comments have been edited for space and clarity.