Barron's: $TSLA Tesla Could Be a ‘Zombie Stock’ as Interest Rates Rise

# Tesla Could Be a ‘Zombie Stock’ as Interest Rates Rise 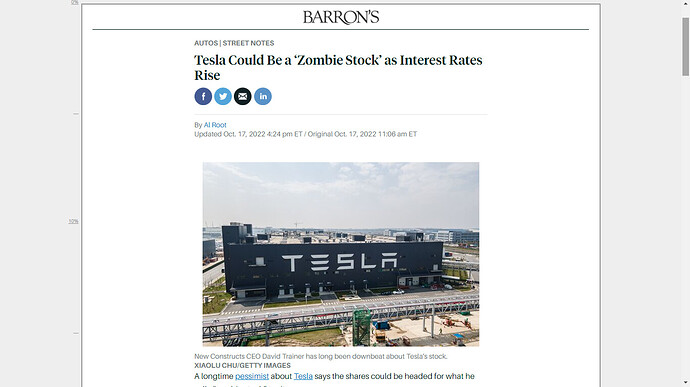 Rising rates are a new concern for Trainer. Higher interest rates tend to depress valuations for richly valued growth stocks the most. Growth companies, such as Tesla, generate most of their earnings and cash flow far in the future. Both are worth less in today’s dollars when discounted back at higher interest rates.

Growth, of course, is the reason for the gap. Tesla’s sales rose more than 110% between 2019 and 2021. Combined sales for the peer group dropped almost 10% over the same span. 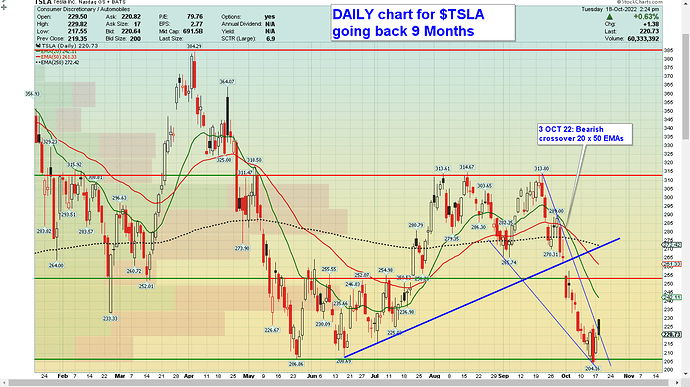 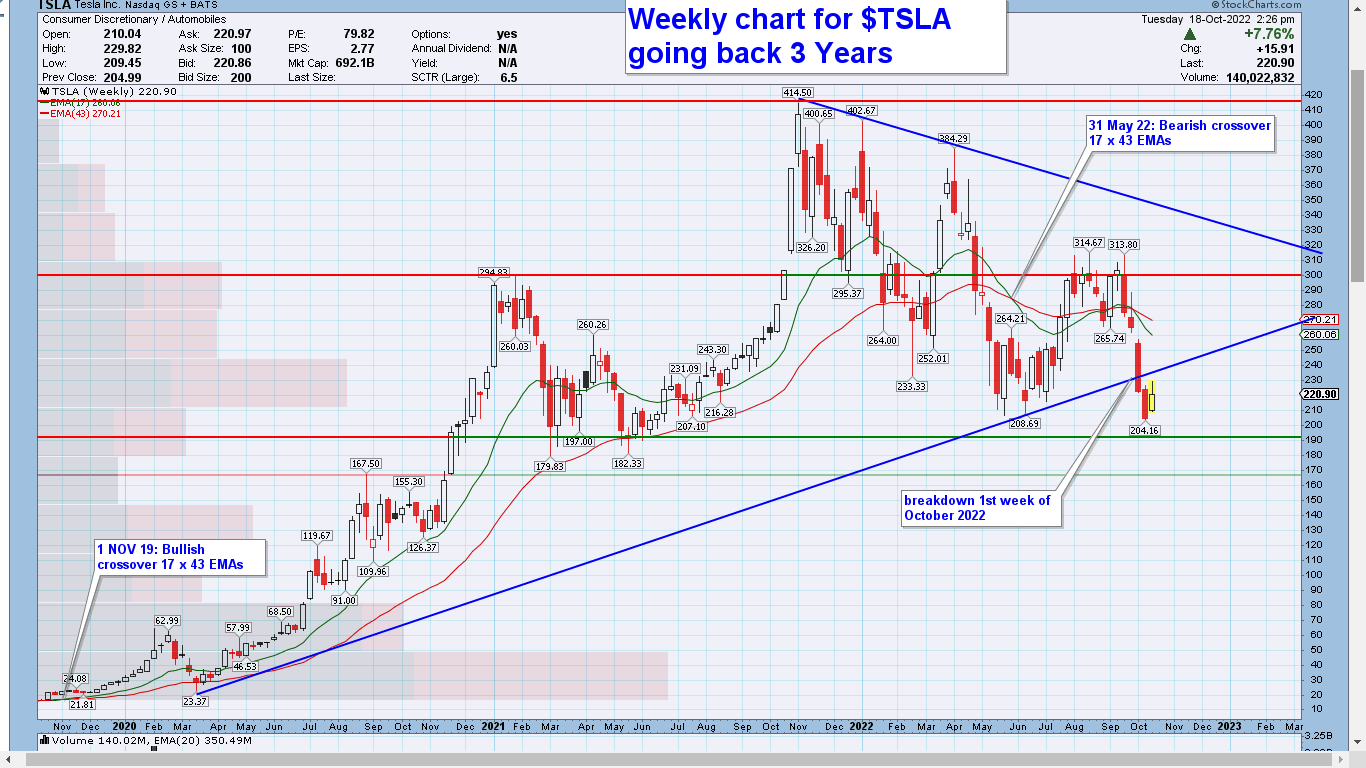 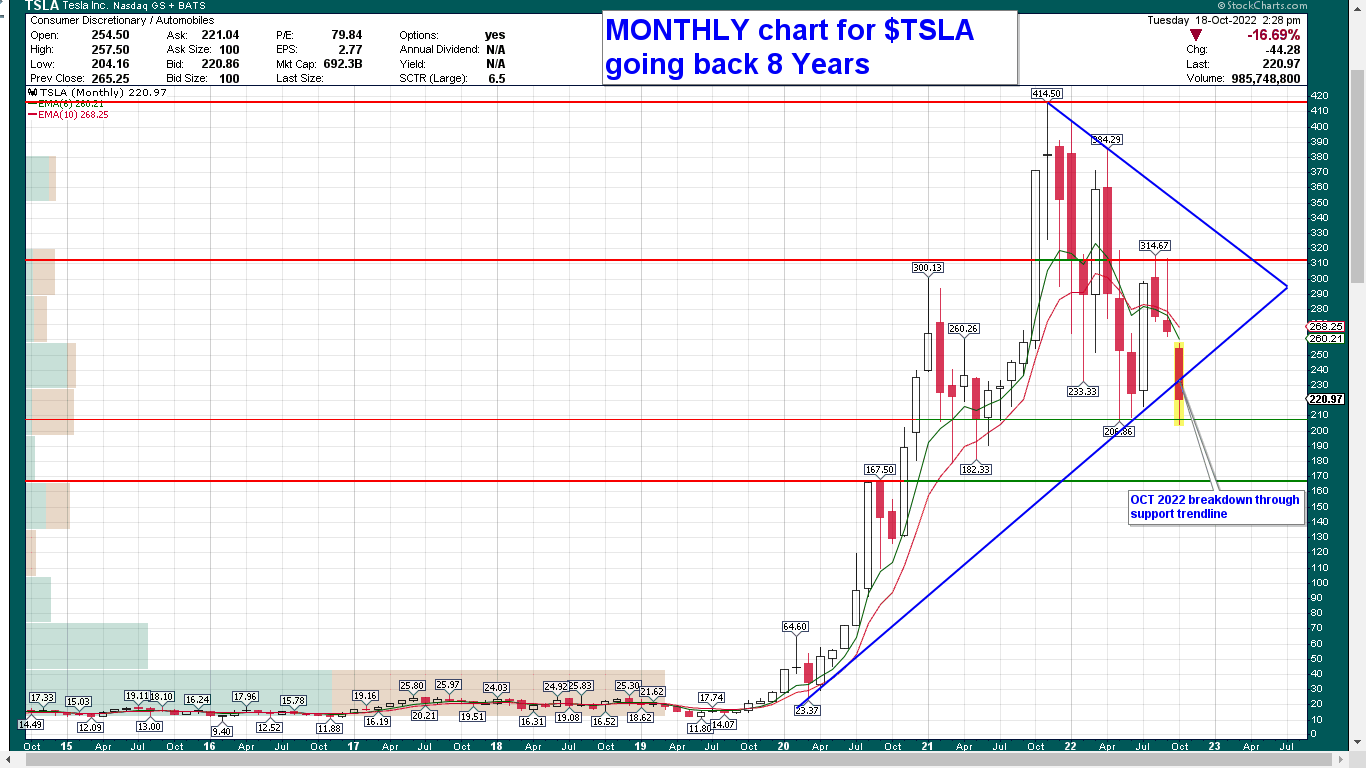 Barron’s: # A Tesla Stock Sale Is Coming. We Know Who, Why and When, but Not How Much.

“Twelve days have now come off the clock since the pause and that leaves Musk just ten more days to close the deal …or face the consequences,” wrote Gordon Haskett special situations analyst Don Bilson in a Tuesday note. “First and foremost, that means the trial would come back to life and Musk would once again be facing a deposition that we think he would do almost anything to avoid.”

To avoid that, Bilson figures Musk might need to sell another $8 billion in Tesla stock to complete the deal. Musk has already raised roughly $35.5 billion in the form of $13 billion in debt commitments, about $7 billion in equity commitments from third parties as well as roughly $15 billion from his own stock sales.

If Musk wants less debt, it means more stock sales. Whatever the final value of Tesla shares Musk sells it should be in the billions and it should be in the few days following Tesla’s earnings report on Oct. 19. Musk hasn’t been able to sell shares coming into earnings. Management and insiders are typically prohibited from selling from quarter-end until earnings are reported.

Tesla earnings are due after the close today. Expectations are high due to newly added capacity. Can they still sell all they can make? Did they run into supply chain issues?

We are watching the numbers closely.

Elon is making a guest appearance for the conference call. I believe the pumps for vaporware will carry forward with a newer, faster tempo, now that the competition has arrived in the EU and China.

I am looking over the trailing 12 months balance sheet now and I’m noticing energy sales are up more than analysts had expected. I’m seeing Mega-Pack sales and services saving the analysts with big revenue expectations who believed more cars would sell.

If Musk was smart, he’d explain deliveries from China in transit and how these “produced” cars were sent to Europe to offload extra inventory end of the quarter. The average selling prices in China - which we were told were going up in China all during Q3 2022 - are now under pressure from the new Chinese competition.

Tesla has kept its operating expenses down considering all the shipping going on in this past quarter and all the “goodwill” burned off in their plants as the new body presses are fine-tuned. (I don’t know if any of you have viewed the drone shorts of junkyards at all of Tesla plants; I’ve never seen such waste at any other car plants anywhere in the world. How all this waste is recycled and accounted for is a story for the future.)

With price reductions below what fanbois expected in China, the actual automotive sales for Tesla worldwide might be up 55% (thereabouts, waiting on the cc for confirmation) but that is still off from car analysts’ worldwide expectations.

Automotive Profit is up 42% worldwide. I’m looking at $5, 212, 000, 000. That’s better than I expected. My thinking is that as Chinese consumption continues to slow down for Tesla cars, prices will have to come down, or, Tesla will cede the lower and middle-class consumers to $NIO $LI $GM $BYDDF, etc.

Two things that cannot be denied about Tesla sales:

Tesla is still #1 in the USA for BEV sales, but with new competition arriving monthly, this dream of 50% CAGR by all the fanbois betting their homes, retirements, assets, etc., on “all in” is one of these moments in financial history where you just kick back with your coffee to see how this mania for $TSLA ends.

p.s. Down 3% in the after-market already. 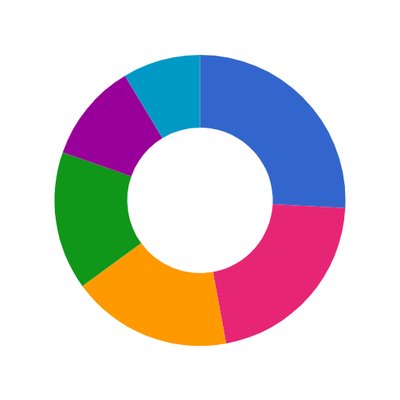 @TroyTeslike
Hi everybody. Tesla Investor Relations has updated the company-compiled consensus to fix an issue caused by some analysts not using the correct share count after the stock split. The average EPS for non-GAAP is now $1.00 instead of $1.09. Here is the updated table. https://t.co/ASTIjK14aV 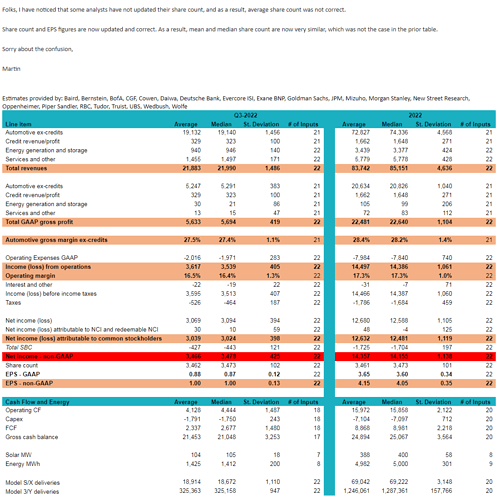 Baffling to me is how many of the $TSLA longs on Twitter truly believe FSD will be here before year’s end, how they claim Cybrtruck will sell millions and outsell the Ford pickup trucks (eventually) and all of us will own $20k Tesla Optima robots that will be making us coffee and giving us backrubs in 2024.

Onward to today’s cc. Musk had better bring his A-game. Wall Street analysts are not in the “better play along with Elon to maintain our access to him” mood any longer.

Elon is making a guest appearance for the conference call. I believe the pumps for vaporware will carry forward with a newer, faster tempo, now that the competition has arrived in the EU and China.

This post consists almost entirely of random idiocy repeated from sources obviously not the investor letter or the conference call.

Hardly any truth to any of it.

If you want to know what’s going on with Tesla, just read the quarterly report (https://tesla-cdn.thron.com/static/WTULXQ_TSLA_Q3_2022_Update_KPK2Y7.pdf) and listen to the conference call (link here: Tesla Investor Relations).

Short story: best quarter ever in most respects, nothing but blue skies ahead. Next quarter will be another monster. Demand is not now, nor has ever been, an issue. Will not be an issue in the foreseeable future. 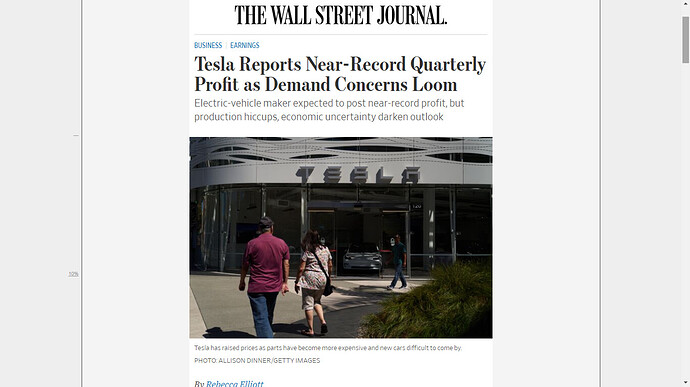 Tesla, after the market’s close on Wednesday, posted quarterly revenue of $21.5 billion, its highest ever, up from around $13.8 billion in last year’s third quarter and short of Wall Street expectations.

However, in the face of rising interest rates and recession fears, Wall Street has grown more pessimistic about Tesla’s ability to deliver the more than 1.4 million vehicles it needs to hit its 2022 target of boosting output by 50%.

To meet that goal, Tesla would have to deliver nearly a half million EVs to customers in the final three months of the year. That would mark a 42% increase from the third quarter, when Tesla put 343,830 vehicles in customers’ hands, a company record. 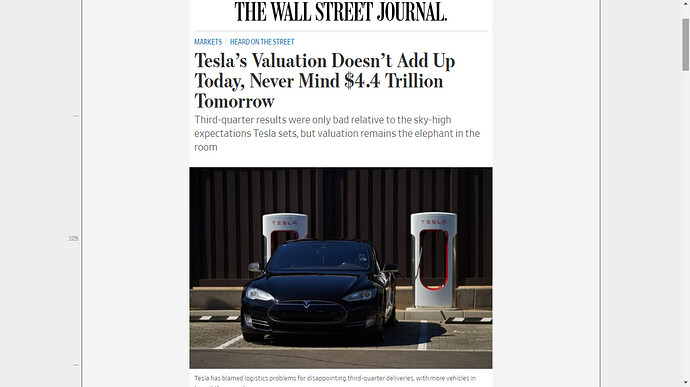 Tesla had a good third quarter, but this is a stock for which nothing other than spectacular is good enough. Case in point: Chief Executive Elon Musk’s new stretch valuation target is “ Apple and Saudi Aramco combined”—about $4.4 trillion.

After the bell Wednesday, the electric-vehicle pioneer reported $3.7 billion of operating profit on $21.5 billion of revenue. While both were new records, both also came in shy of consensus estimates that had already been cut following a disappointing quarterly sales report earlier in the month. Shares fell in after-hours trading.

Tesla set itself up for the fall. It struggled in the second quarter due to Covid-related shutdowns in Shanghai but insisted that it might still be able to hit a target of increasing sales by 50% this year. That raised expectations for the second half. After a merely solid third quarter, all the pressure is now on the fourth quarter, which Mr. Musk said on a call with analysts could be “epic.”

In premarket trading $TSLA is down over $14. It is getting harder and harder for Elon to close that Twitter deal without tanking $TSLA. 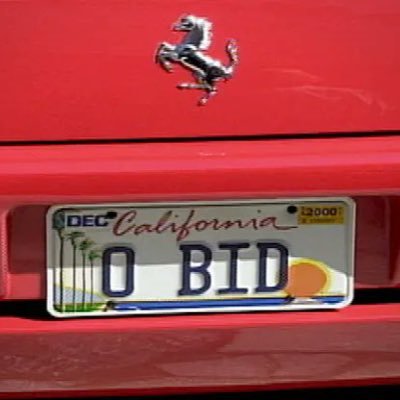 @amazonholder1
Gene Munster with a straight face just said $tsla revenue will go to $400b by 2026. Where are all these new buyers of $50k cars coming from in the upcoming recession?

Gene Munster with a straight face just said $tsla revenue will go to $400b by 2026. Where are all these new buyers of $50k cars coming from in the upcoming recession?