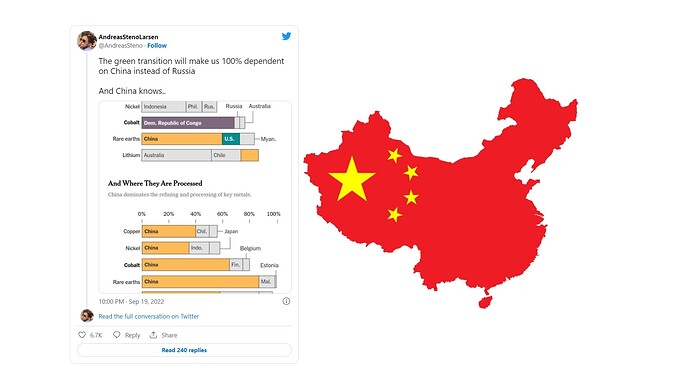 Germany learned it should not depend on a dictator with imperialist ambitions in the worst way possible. Relying on China may hold similar traps.

Before the UK returned Hong Kong to Chinese rule in 1997, the CCP promised to allow the region political autonomy for 50 years. It has since arrested critics, closed newspapers, and jeopardized Hong Kong’s financial hub status. As Andreas Steno Larsen warned on Twitter, this is the country that dominates the raw materials supply chain for electric cars.

China is the most important producer of rare earths, a crucial component of electric motors. Although it is not as relevant in mining copper, nickel, cobalt, or lithium, all these minerals go to China to be processed. The country developed this manufacturing infrastructure because Chinese cities had a massive public health problem with ICE cars in regions with more than 30 million inhabitants. I have no idea if that advantage was developed with geopolitical intentions, but the fact is that it can be used that way, especially when batteries become more necessary than today.

That is what the Inflation Reduction Act intends to change by incentivizing electric cars made in the U.S. with local components. World Trade Organization (WTO) threats will probably make no difference for the American government when what is at stake is to avoid depending on the CCP. That involves more than developing the skills and industrial infrastructure necessary to produce the batteries that electric cars need. It also relies on creating a relevant market for these vehicles, which explains why the Inflation Reduction Act focuses on more affordable automobiles.

From the same OP link:

In a connected world, it is a fantasy to believe a given country or continent will be able to manufacture everything it needs. However, it is possible to choose where you will buy these things and who will sell them to you. You may need natural gas, but you’d better buy it from Norway, Algeria, or countries that do not intend to invade others. You may also need raw materials for batteries, but buying them from the government that suffocated Hong Kong, wants to do the same with Taiwan, and holds the Uyghurs in concentration camps in Xinjiang does not feel wise.

Suppose China decides not to sell raw materials abroad anymore. What will carmakers do? Where will they get the cells they need worldwide? What about the brands committing to selling 100% of electric cars by 2030 or even earlier? Remember how many people carmakers employ worldwide (directly and indirectly). Now calculate how much power a country concentrating raw materials for cell production has in a world that only buys battery electric cars.

That does not mean that we should stick with combustion engines. Fossil fuels have a limited reserve, combustion engines turn most chemical energy into heat and fumes, and electric motors are unbeatable in energy efficiency and emission-free when operating. Transport will be electric, and that is unavoidable. What is still up to debate is the pace to get there, the means to achieve this goal (batteries, [fuel cells] or a mix of both), and which partners will help us get there. Ruling out dictatorships is a no-brainer: we do not have to repeat Germany’s mistake with energy when it comes to electric cars, do we?