[ This is related to my travails restoring my new iPad Pro from a backup of my old iPad Air. ]

After an incomplete upgrade, I am missing 163 PDFs in the Books app. One way to get them in sync (which I mentioned in my other thread about my saga) could be to enable the Books app to use iCloud for its storage. I’ve tested on a different iPad that I have that is associated with a different Apple ID, and enabling that only causes any local books you have to be uploaded to iCloud, and does not remove the local books. They simply remain “downloaded”, which is good.

Now, the plan would be to enable the Books app on the old and new iPads to use iCloud storage and in theory, everything should end up in iCloud storage and accessible to both iPads, with the already local (i.e. downloaded) books untouched.

The crucial question is that happens to books/PDFs that are on both the old and the new systems. I would presume the iCloud syncing software is smart enough to reconcile any duplicates and only keep one of them in iCloud. Plus, if there are books on one iPad but not on the other, they would now appear as selectable items on the iPad that didn’t have them, and they would then become downloadable.

I plan to call Apple before actually attempting this, but I’d still like to hear from anyone with experience with using iCloud storage for apps, particularly the Books app.

Now, the plan would be to enable the Books app on the old and new iPads to use iCloud storage and in theory, everything should end up in iCloud storage

Apple does not store any Apple products (books, music or applications) in iCloud. Rather it stores a database listing the Apple products and associated restrictions. (Restrictions include things like Digital Right Management and sharing with family members.)

Since Apple does not store copies of anything it sold you, you will not get duplicates. It may be possible if you upload a copy of say Pride and Prejudice acquired independent of Apple and you purchased another copy from Apple there might be two copies. Should happen, if you delete the one you uploaded, the amount of storage space in iCloud would be reduced a bit.

Right. All the “books” I’m worried about in the Books app are PDFs obtained outside of the Apple book store. Any PDF from anywhere online or even a PDF conversion of a webpage can be stored in the Books app. So, it is those that I am wondering about duplicates of and how they are treated. And by duplicates, I mean truly identical, down to a SHA512 hash of the contents, i.e., a byte-for-byte match. If the TITLEs are different, I might expect both copies to be treated as unique, but not otherwise.

I found these searching this topic. Plenty of articles on storing pdf files into the icloud. HTH…doc

How to store PDF files in iCloud? - Apple Community

Thanks, doc. I was aware of all the things mentioned in the article about PDFs and the Books app, or at least I became aware after actually enabling iCloud storage for the Books app on my old iPad Air. But I’m still slightly anxious about what will happen when I do the same thing on my new iPad Air which has an incomplete local copy of all the PDFs that were stored locally on my old iPad due to a restore from an iCloud backup that got hung up near the end and never completed despite many attempts to nudge it along by repeatedly restarting the iPad to let it progress a bit more. (See my old posts about that fiasco!)

The reason I’m still worried about enabling iCloud storage in the Books app on the new iPad is that the old one behaves strangely: sometimes it completely loses the counts of the 900+ PDFs I have organized into some 30 separate Collections and reports a much smaller number of total PDFs. The first time that happened I nearly panicked that it had lost all my precious PDFs, only to become relieved after 30 minutes or so when the Books app managed to correct itself. Since that first time it has done it several more times, but at least it has recovered after each one.

I don’t use the Books app, but I do use iCloud for storage of over 90% of my stuff. (I have not enabled Apple’s system to move Desktop and Documents to iCloud. Rather moved stuff from my Documents folder to the iCloud folder. My iCloud folder has a system of folders and subfolders just like in the old DOS and Windows days. My wife has done the same thing. Our reason for doing this undoubtedly does not apply to many people. We are older in our 70s and 80s. We want (and will need) access to most of the stuff the other person has when one of us become disabled. We actually performed “Share” for all files and folders we each put into our separate iCloud systems.

I don’t think there is any way the iCloud system is going to loose any of your 900 PDFs. I have tens of thousands of files and my wife has a similar number. A few thousand are images - but still they are files. When I change structure of the file system occasionally takes some time to sort things out but usually only a few seconds.

If as you say, the Books app stores things in the same iCloud system as my files, they are far safer than if saved only locally. Apple has serious redundancy. How many people do you know who have off site backup? While TimeMachine is great, if someone is burgled and they take both your computer and the attached TimeMachine drives how will they recover? I actually has my computers, iPads and external drives all stolen back in 2013.

I’d trust the automatic iCloud storage of all my 900 books (PDFs) by the Books app a lot more if I could see those PDFs using some other method than the Books app. Most other iCloud documents can be seen on iCloud.com but apparently not those in the Books app. Here’s what I see (one note has been blacked out from prying eyes): 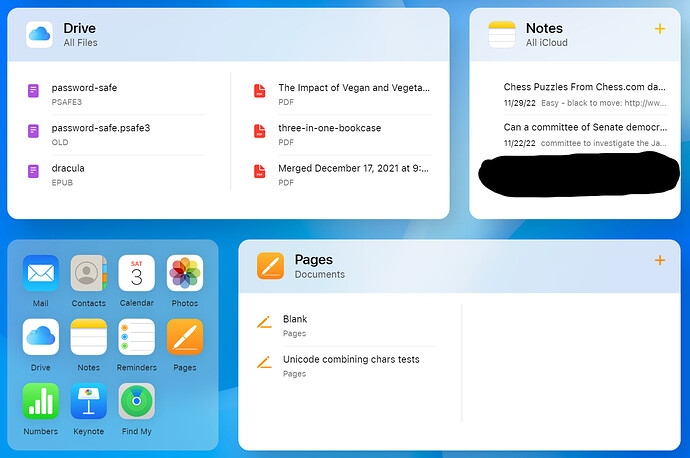 I believe the 5.7 GB of “Documents” that my iCloud storage use shows me I have is almost all due to the PDFs in the Books app but I’d dearly like to be able to access them just like other documents stored in iCloud: 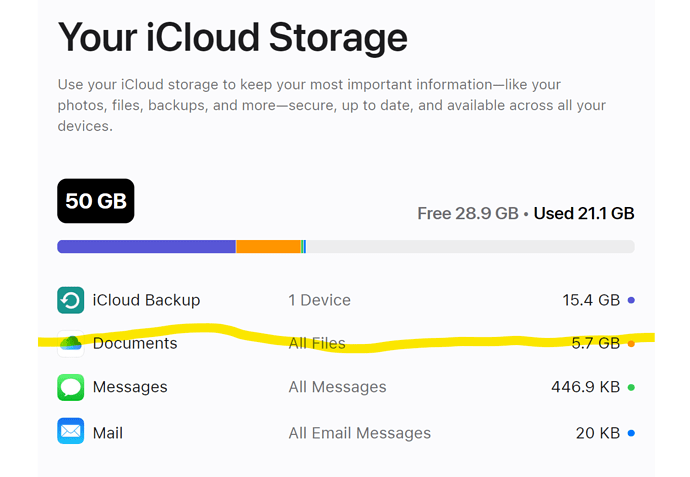