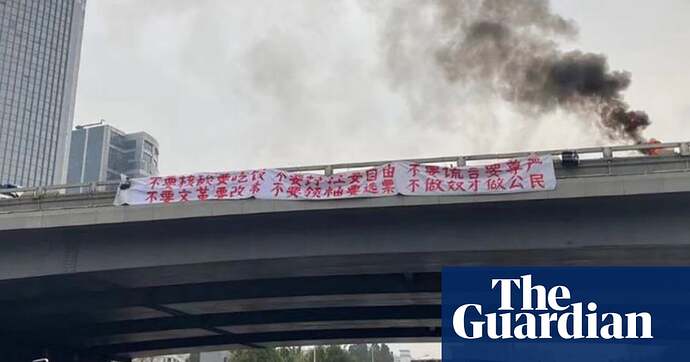 ‘We all saw it’: anti-Xi Jinping protest electrifies Chinese internet

Chinese authorities have strictly censored discussion of a rare protest in Beijing on Thursday that saw large banners unfurled on a flyover calling for boycotts and the removal of Xi Jinping, just days before China’s most important event of its five-year political cycle.

Photos and videos of the protest on the Sitong bridge emerged on social media on Thursday afternoon, also showing plumes of smoke billowing from the bridge over a major thoroughfare in the Haidian district of the capital.

“We want food, not PCR tests. We want freedom, not lockdowns. We want respect, not lies. We want reform, not a Cultural Revolution. We want a vote, not a leader. We want to be citizens, not slaves,” said one banner, while a second called for a boycott of schools, strikes and the removal of Xi. 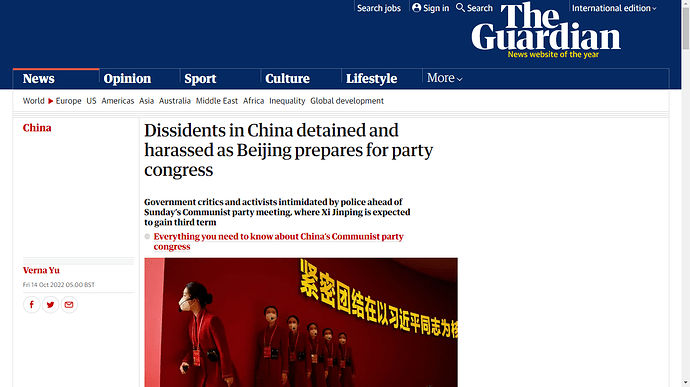 Chinese authorities have stepped up surveillance and harassment of government critics as part of a crackdown on dissent ahead of the Communist party’s upcoming 20th congress, its key political gathering.

Since mid-September, numerous activists and petitioners seeking to lobby the government have been detained or put under house arrest across China, while many human rights lawyers have been intimidated, harassed and followed by agents. They say authorities, wary that their criticisms of the government could lead to social discontent and threaten the regime, are pulling out all the stops to silence them ahead of the twice-in-decade event, set to start on Sunday.

Xi Jinping is expected to gain an unprecedented third term as a party leader at the congress, sparking the highest level of security to keep any potential disruption in check.