Upgrade from iPad Air 2 to a new iPad Pro?

My trusty but now slow iPad Air 2 (model A1566) is stuck on iPadOS 15.7. No more recent update shows up as available for install. I don’t think the hardware is supported by iPadOS 16. Will this be an issue when I decide to buy a new iPad with the latest iPadOS? I’ve restored new iPads from backups of an old one in the past but don’t recall if the iPadOS versions are required to match.

The versions are not required to match.

I’d recommend Quick Start, Use Quick Start to transfer data to a new iPhone or iPad - Apple Support
This is Apple’s current recommended method for upgrading to a new device.

Thanks. That seems almost too easy!

That seems almost too easy!

I’ve done that a few times with the family’s iPhones. It really does work well.

Assuming it works the same with iPads, all you need to do is have the old iPad close to the new one and turned on when you first start the new iPad. They find each other and ask if you want to transfer everything. Once you confirm, they handle everything themselves.

You will have no trouble installing your iPad Air 2 unit’s backup on any new iPad you purchase.

If you have not purchased yet, you might want to consider getting the 2021 iPad Pro. The one just released has no functionality excepting a slightly faster CPU/chip. Places like Amazon for example may have stocks of the 3rd generation product. (Model A2377) 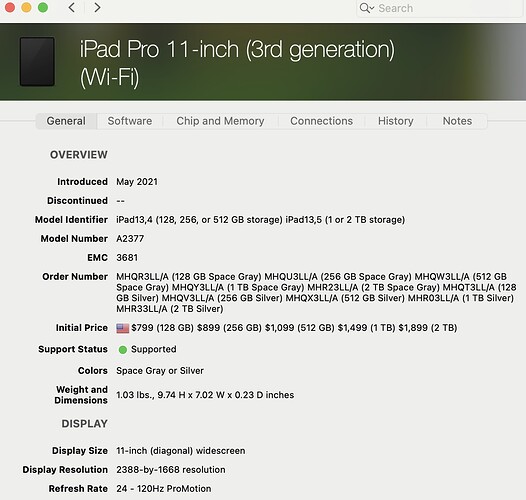 This is Apple’s current recommended method for upgrading to a new device.

I feel compelled to point out that you still need to backup your device.

This process works quite well providing you have your old device. But if your device is lost, stolen, or has become inoperative, you need a backup to get back to where you were (or where you were at the time of the backup, which should be pretty close). That backup can be an iCloud backup - which is likely the easiest backup to restore.

I personally also make a periodic backup to my desktop computer. Just because I still can.

Currently on Amazon, the last gen 256 GB iPad Pro 11" is only $50 cheaper than the new one from Apple. I’ve been waiting for the M2 update simply because I like to buy the current gen chip to ensure the longest possible longevity. The new pro also has wifi 6 and support for the “Apple Pencil hover” feature. Not sure why that necessitates the M2, since I would have thought it was just a software change, but the M1 iPads apparently won’t support it.

I feel compelled to point out that you still need to backup your device.
…
That backup can be an iCloud backup - which is likely the easiest backup to restore.

I personally also make a periodic backup to my desktop computer. Just because I still can.

My phone is backed up to both iCloud (nightly) and my Windows computer (occasionally, including a few hours ago.) My granddaughter, however, has no backups. Her old iPhone was apparently very full, choked on the transfer process to a new iPhone, and she pretty much freaked out. (It worked out in the end.) The $3 per month I pay for 200 GB of iCloud space is an absolute bargain.

Ok, all was going great using the simplest method to set up my new iPad Pro by using the direct data transfer method. The “estimated time” dropped precipitously as the transfer progressed, starting at 30 minutes, then rising to 2 hours, 3 hours, 4 hours, 5 hours, then back down progressively to 30 minutes, 20 minutes, etc., all the way to about 5 minutes. Total elapsed time was only about 30 minutes. But then I got the dreaded “unable to complete transfer”. Of course, there was no clear indication of how to proceed after that. So, since I recently upgraded the old ipad from iOS 15.7 to 15.7.1 (which is the highest level available), but I hadn’t restarted it since then, I tried that, and then started the transfer process over. Waiting for that to finish now. If it fails again, I guess I’ll have to attempt the restore from iCloud backup method. Note: both iPads were fully charged and inches away from each other throughout the process. (Does the direct transfer use bluetooth or wifi? I suppose wifi, but then the network path is through my router and the extreme close proximity probably isn’t necessary.). …5 minutes later… dagnabbit, it failed again. Any ideas? my old iPad has 58 GB used out of 64 GB capacity. Does it need more free space?

The critical items are the bandwidths in your home.

What is the download bandwidth your WiFi system has?

What is the download bandwidth wired to your computer?

I find restoring from iCloud is the easiest way.

I’ve only used restoring from a backup made to my Windows computer over USB. Both backup and restore performed by iTunes running on the PC. For me, over two or three upgrades, it has Just Worked.

Restoring from iCloud will be using the wireless bandwidth of my network, which is about 115 Mbps down and 36 Mbps up. Not the greatest but it’s what I have. It’s not clear to me how the “direct transfer” method works, whether it uses bluetooth or wireless or some combination. Frankly, it’s not even clear to me what all will get transferred. Is it just the bare minimum and after that you would still have to do a restore from backup? Google has been unhelpful, so I guess I’ll have to call Apple, which will be a first for me. I hope they have some smart people manning the phones.

If you restore from an iCloud backup, your new iPad will be exactly like the old one in terms of programs, data, icon location, settings, etc. There certainly will be many features/capabilities that are new. Some new items get a mention on the screen - like an opt in or message regarding the setting.

Given that you have started and I assume now abandoned a restore action, you may be in the position you have to clear your new iPad to factory condition and start again. Frankly if I were advising a friend in your situation, I would restore to factory before calling AppleCare.

AppleCare people are like any tech support - some better than others. Apple’s Senior people are generally amazing.

Without exception, Apple’s customer service people as a whole are better than anybody I have dealt with.

My wife just got a new iPad and when she turned that on a message appeared on the device that lead the the entire restore process. It was smooth. The biggest hassle she had was keeping her face inside the circle when setting up Facial Recognition.

Did you see such a message? In the event you did and did not follow the directions, that might be your easiest and fastest solution.

My wife just got a new iPad and when she turned that on a message appeared on the device that lead the the entire restore process. It was smooth. The biggest hassle she had was keeping her face inside the circle when setting up Facial Recognition.

Did you see such a message? In the event you did and did not follow the directions, that might be your easiest and fastest solution.

Yes, that’s exactly the process I did, three times, plus one more while on the phone with Apple, all of which led to the data transfer incomplete error message after about 30 minutes. A reset of the new iPad is the only option once you get that message. Quite frustrating.

I was on the phone with Apple tech support and I was not impressed. They seemed to know less than I did about what’s in an iCloud backup and how that differs from simply enabling iCloud support. The later option, which I am not using, results in documents that are stored in iCloud always, and therefor don’t take up local iPad storage, and are therefore not backed up as part of any backups to iCloud that you may do. Apple’s Settings UI is frankly confusing as he-ell-ell and poorly organized when it comes to iCloud support and backups. And the “quick start” data transfer process gives you no clue whatsoever about what it’s actually doing while the transfer is in progress, other than periodically updating the “time remaining” estimate with wildly inaccurate numbers. My transfers typically start out at 4 to 10 minutes, then rise to 1, 2, 3, 4 hours, then back down to 30 minutes, 20 minutes, all the way to 10 or 5 minutes, at which point the transfer fail message appears, and the whole process is over in under in about 30 minutes. There is no final detailed error message about what specifically went wrong. Typical poor feedback UI design. Apple, of all companies, especially one touting that the customer experience is paramount, should make it a priority to make this better.

There is no final detailed error message about what specifically went wrong.

I’m assuming you are on a Mac while this is happening. If you Open the Console app you will see the steady stream of what is going on, both on your Mac but you can also select the iPad, iPhone, or even a Watch and see it, maybe select Error messages. I see in the sidebar, our iPhones, Watches, iPad as well as my Mac Pro, I don’t see DW’s iMac, but that is likely a Share setting on her iMac… A lot going on, I see a lot of errors even though I have no known problems, I’ve spent some time chasing a few, highlite and Google the error, and likely find interesting discussions, maybe even the cause for that error, but everything I’ve chased in the past ended up unimportant… But there’s a chance you’ll see something more interesting… It’s similar to the Verbose Mode on booting, more information than we need, but it can be interesting, maybe spot something fixable… maybe old app data confusing the system, never know without looking… But to get that sort of deep help from Apple would need a pretty high level support bumpup. A direct line into the guru level… Not likely for us casual users…

Anyway, there is a ton of information out there, sometimes the Apple Discussion boards are useful…

There’s no Mac or PC in the equation. Just the old iPad Air 2, the new iPad Pro and that’s it. Both on the network, the old transferring data to the new. iCloud isn’t even involved since I’m not trying to restore from a backup. It’s the new paradigm, and it just doesn’t work. Fails for no given error. Still investigating other options and sources of information that will clarify things…

FYI, it’s supposed to be as easy and painless as is presented in this brief doc: Use Quick Start to transfer data to a new iPhone or iPad - Apple Support

I’ve always had a Mac handy, from way, way back, so doing anything without cables, and such is pretty much beyond where I’ve been…

There must be other similar iPad only users, but none I know of… Even my luddite BIL has his iMac to deal with SIL’s iPad… He found a local tech to fix things I didn’t have time to dive into or deal with his confusing email setups…

Answers are out there…

Weco perhaps you missed this – but he has an iPad that is Vintage as in not supported. At some point in time nonsupport will extend to things like a painless (or any) data transfer to new products.

He is a Windows person. As you know MSFT has a commitment to keeping their OSs functional forever and that is not the Apple position.

I wouldn’t call the iPad Air 2 unsupported. True, you can’t install iOS 16 on it, but Apple just released 15.7.1 as a security fix for older devices and I had just installed it.