WaPo: For these aging NFL star quarterbacks, this season is already getting old 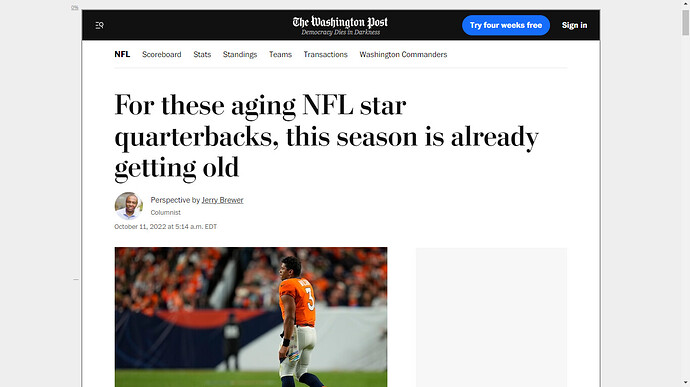 After roughly one-third of this ragged NFL season, several prominent quarterbacks have been left to do a lot of soul-searching. Most of them are highly productive veterans or surefire Hall of Famers attempting to handle more responsibility than they should be expected to at this stage in their careers.

Standout quarterbacks receive adulation and high salaries because they maximize a team’s strengths and conceal its flaws. The belief is the same around the league: If you have the quarterback, you always have a chance. Good ones, never mind great ones, are rare and coveted. But as saviors, they are more limited than portrayed. It’s the combination of quarterback and organizational competence that opens a Super Bowl window. As that window starts to close, a special player can prop it open for a while. But injuries turn up, roster-building mistakes add up, and the rules of a parity-based league catch up. After a while, there is only so much a quarterback can do, especially once defenses adjust to stopping him.

It’s true even for Wilson, the youngest of the bunch at 33, who convinced the Seattle Seahawks to trade him to the Denver Broncos in March because he wanted to play in a more autonomous, quarterback-driven system. But instead of amplifying his talent, the Broncos have exposed Wilson in a tenuous situation — rookie coach in over his head, new owner, new team president, more roster holes than perceived. He has been a great player for a decade, but he’s an aging, 5-foot-11 quarterback who needs to adjust his style of play for the sake of longevity. That requires the right talent around him, the right offensive strategist to orchestrate it and the right mind-set from Wilson.