looking at QQQ nasdaq 100 etf, we had bear market rallies peaking in Apr, Aug, and Nov. Last few days QQQ has been ticking up.

Trailing 5 mth inflation is 2.5%, but Fed committee members are talking hawkish. Consensus for Dec CPI month over month is 0%. Markets are pricing in a 25bp Fed funds increase at next Fed meeting. At 4.25-4.5% with Fed projecting rates to peak around 5%, we could be close to peak rates.

In recent dip, NET, SNOW, TTD approached their 52 week lows, but didn’t get there. Others, CRWD, DDOG have hit new 52 week lows and showed less strength.

The markets always try to anticipate when the uptrend will begin. Investors want to be there first. No one knows if this is the right one. If interest rate reduction is due mid 2023, some anticipation is likely but you would be surprised if it sticks before Spring.

I do think the current market is entirely focused on the FED. Hence the current rally as inflation is trending down. Today the CPI numbers came in exactly according to estimates. Some categories lower and some higher like housing related numbers. I think the FED is rushing to get back to 2% inflation and while the inflection point down took longer than anticipated it usually continues the trend. I will say one of these CPI reports may come in a bit warmer than planned but generally the downward trend should continue.
The really had work comes now when trying to get to 2%. Could be a chance of overshooting to the down side. I do think people underestimate the FED statements of keeping rates higher for longer.
I believe at some point the market will start to focus on earnings and I think that is where we would see some cracks in the market. I think earning estimates are still too high and the next few months could be bumpy.

Pros tell us that interest rates have a major impact on the current value of future earnings especially for young companies and those with high growth prospects. Those calculations limit the price they are willing to pay for growth stocks.

Retail investors are used to the days of low interest rates. The shift to the age of high interest rates could be another paradyme shift.

I increased shorts on the move up today.
Agree inflation starts to fade as a negative story, but also think as we start to get forecasts from this coming round of ERs, that we see more angst/hints of softness, and equities may start to reprice based on earnings fears.

Inflation rates were round after round of body blows.
Earnings weakness could be the headshot before the knockout? Will see.

Yep. No worries what so ever… 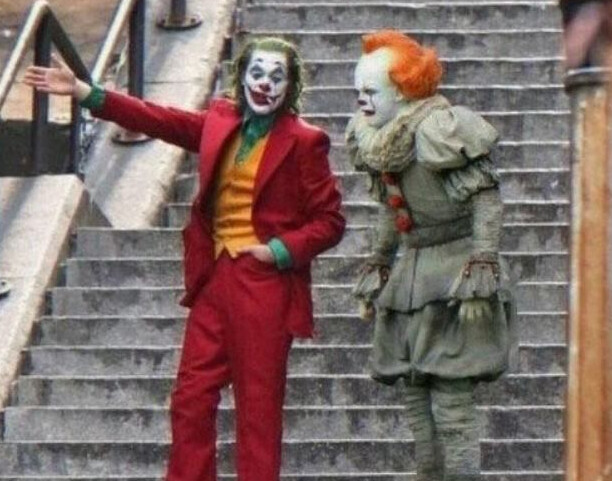 For shorts, I feel the big opportunity is gone (e.g., Oct-Nov 21 to early 2022 highs or anything in that neighborhood). I was not thinking short at that time as I was in sky-high euphoria with UPST, ASAN and NET and the bunch (of those, I still only own NET which I have conviction on for durable growth - who knows?).

Speaking for myself, I am watching ARKK that I would short with puts, but this is low on my list of priorities as I think the big fall is past. I would not short SPY or QQQ, these indices are too broad and won’t move as much as a more focused ETF or single stock. I would try to short something more focused like a sector or individual stock and only with puts, but I have not decent record of success shorting.

I feel we are in a bit of a range, with value stocks run up and unprofitable growth crushed. Profitable growth is doing better like ORCL, NOW, MSFT (relatively speaking).

For trading, I am short Feb calls and puts on IGV, which has mix of profitable and unprofitable tech, to generate some bits of income.

I kind of get the sense that retail investors largely can’t shake the btfd and “it always goes up” mentality they have enjoyed since 2009. And really even further back from an interest rate perspective.

I feel like we are in unchartered territory, and like the frog in boiling water analogy, we just haven’t noticed things changed yet. Supposedly that analogy is false, so how about another one:

I was better-looking in my 20’s. Sure, some grey gives me a bit of gravitas, and while I am trying really hard to maintain muscle mass at 50, similar to what I used to have back then, my face and general appearance won’t look like I am in my 20’s.

I got bored and finally checked out Warrior Nun on Netflix. Bit of a CW-vibe, but has enough action/sci-fi to keep me interested. The lead actress is now 25 yrs old (Alba Baptista) and is so ridiculously cute, she reminds me of Alyssa Milano back in her 20’s. Never heard of her as she is Portuguese actress and this was apparently a new english-speaking role, and I see that she is dating Chris Evans (Capt America/Marvel fame) and he is 41.

Granted 41 is younger than 50, but I am not that much different now than I was in early 40s, and I don’t have the fame or likely fortune of the successful Marvel actor.

Quite simply, Alba is out of my league.
Even in my 20’s, she would have been out of my league as famous actress, but she looks like wholesome girl next door you could find in most cities in US, and I did date a few lookers in my time. So let’s just say I had a chance with an Alba-esque equivalent in my 20s.

But I don’t now. Outside of being a billionaire. So money aside.

What the heck does this have to do with the markets, Dreamer? You done lost the plot!

I am saying that I think a lot of the retail investors don’t realize things might be different for a good long while. A lot of them are equivalent of the 50 yr old guy living in the past, and not realizing things have changed.

Ok, so now we know the more realistic angle is a tragically-widowed in-shape late-30’s (at best) or early-40s mother of (hopefully) about-to-graduate high school children. Ideally latina ala Eva Mendez. Ideally incredible cook. And wish me luck with that, btw.

But yeah, you aren’t 25 anymore. Things have changed. Your thinking may need to change, too.

Dreamer - love story time with you!

Other than that… my ZS will be called away. Lost money there but I suspect I will get an opportunity to buy back below strike price. The other options will expire worthless in 20 minutes. Rice and beans money for next week.

Those were the days, my friends, although I did know they would end. I wasn’t disappointed. Can’t say that 80 is the new 50.

Regarding interest rates, the 10yr Treasury went from about 4.2% in late Oct and early Nov (near QQQ prior market bottom) to about 3.4% today (with QQQ ticking up).

I read an article that the US debt ceiling problem will limit the supply of Treasurys and hence pressure Treasury prices up and yields down. But what happens when this reverses, Treasury supply increases and yields rise again? Stocks could then be in for more pain.

BlockquoteBut what happens when this reverses, Treasury supply increases and yields rise again? Stocks could then be in for more pain.

I don’t know. The yield curve is inverted. 6 months is 4.8%, 2-yr is 4.685, 10-yr is 3.48%. This is recession predicter. A reversion to positive slope on the yields would predict economic recovery, so maybe the rising 10-yr would result in stock price inflation?

I have heard the true yield curve to watch is 10 year to 3 month which is also deeply inverted. Traditionally the real stock market pain doesn’t arrive till that inversion is well on its way to unwinding. That Could be 1 year to 18 months away or market is anticipating the unwind now. Who knows

CBOT FED fund rate futures market is predicting the first rate cut August 2023 which I think it would take some serious pain in corporate earnings and unemployment to raise quickly in the next couple months.

Also, below I found this interesting but it’s just one indicator. Basically, this Macro Index combines 11 diverse economic indicators that leans towards housing and employment data

The Macro Index Model declined to the lowest level in more than a decade. Prior readings of less than 30% have foreshadowed a recession in 7 out of 7 instances. 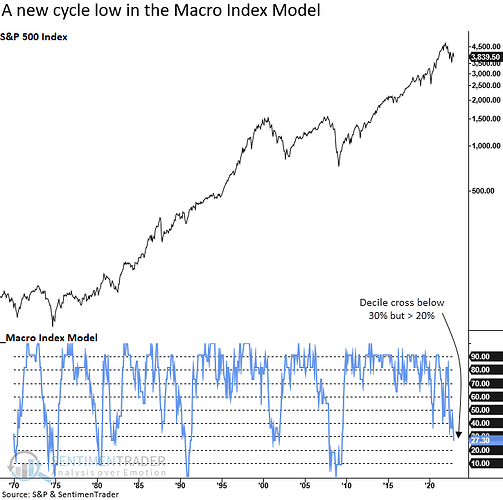 When the Macro Index Model crosses below 30% but remains above 20%, annualized returns for the S&P 500 look abysmal. And if the ranking falls below 20%, it’s not much better. However, a cross below 10% suggests good things could happen. i.e., it’s so bad, it’s good. 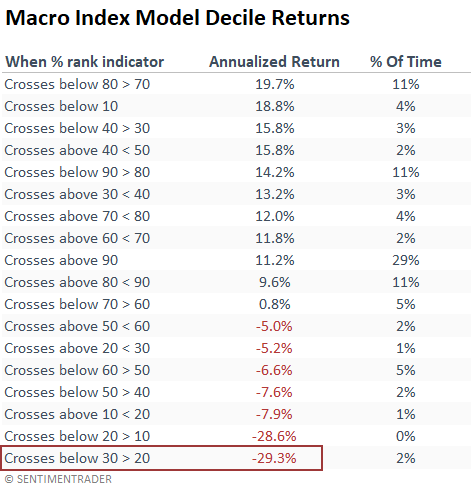 What’s really interesting to me is when things get so bad (lower than 10) the return is actually 18.8% annually. Which I believe corelate with a fed U-turn and actually start lowering rates.
We could see a stronger BMR or trade down to new bear market lows. For today it seems a BMR is in order but lot’s of earnings and economic news in the next 2 weeks so I expect some volatility the next 2 weeks. I do think we eventually retest 2022 lows again but who knows when.