The edible egg is back

The eggs that have passed.

Seriously the egg crisis is over but I saw something funny yesterday.

Turns out the Avian Flu that caused the culling of so many egg laying hens was not much of a problem. The hens were replaced in about three weeks by young hens.

I was in Whole Foods Market yesterday. During my checkout I noticed people buying eggs at a few of the cash registers were buying either 3 or 4 cases of 18 eggs. Worried I guess that there was an egg crisis. What does someone do with 54 to 72 fresh eggs? They did not notice if there was a shortage of eggs how were they able to buy so many eggs.

I buy 4 dozen at Costco on almost every visit. I hard boil them and have them at breakfast, and they last about 3 weeks for just the two of us. Imagine if there was a family here. I also often pick up another dozen to make fried, or Mrs. Goofy makes crispy rice frittatas and uses them.

That is actually a good idea for me. I boil an egg every morning. Wasteful while I could save some time just retrieving an egg from the fridge. Point taken but with the news people were stocking up.

You eat a hell of a lot of eggs. I eat about 30 hard boiled per month.

@Goofyhoofy how do you boil a lot of eggs at one time and not end up separating out the copper and sulfur? How many can be in the pot and how much time do you give them?

On my scale a dozen large eggs weighs 1.5 lb. At $4/dozen that’s $2.50/lb. Still a bargain compared to ground beef, about the same as pork sausage.

At regular prices one of the cheapest protein sources around. Very LBYM. 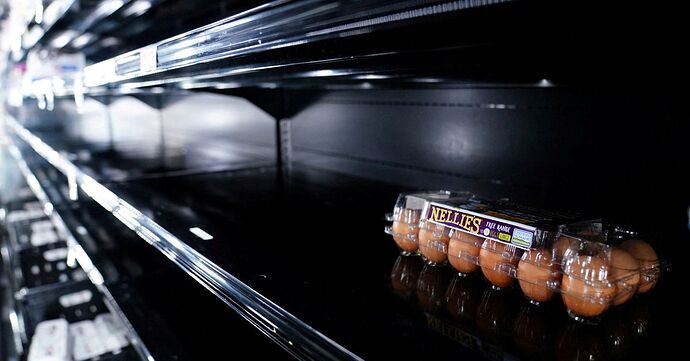 The Federal Trade Commission (FTC) should examine high egg prices for signs of price gouging from top egg companies, a farm group said, as Americans continue to pay more than ever for the household staple.

*U.S. regulators, farmers, and industry have often argued in recent years about the power of top agriculture firms to set prices and drive up what consumers pay for groceries, *
… Snip …

Cal-Maine Foods (CALM.O), which controls 20% of the retail egg market, reported quarterly sales up 110% and gross profits up more than 600% over the same quarter in the prior fiscal year
…snip…

In the filing, the company pointed to decreased egg supply nationwide due to avian flu driving up prices as a reason for its record sales. The company has had no positive avian flu tests on any of its farms.

Worried I guess that there was an egg crisis.

Would the Shiny media promote hysteria? Would “big egg” leverage the hysteria to price-gouge? Surely, not in Shiny-land.
/sarcasm

@Goofyhoofy how do you boil a lot of eggs at one time and not end up separating out the copper and sulfur? How many can be in the pot and how much time do you give them?

My wife makes perfect hard boiled eggs, completely bright yellow yolks, no grey at all. I think the strategy is she puts in the eggs in cold water in a pot on the stove, and brings it to a boil for I believe nine minutes, something like that. Then the eggs go back in cold water. If I remember, I’ll ask my wife for the exact formula when she gets back.

I believe the mark is 6.5 minutes and after that the copper and sulfur fall out. They form a sort of green layer on the outside of the yoke. Changes the taste of the egg because the minerals are not consistently in the yoke.

This issue is if you boil enough eggs and it takes 9 minutes is that the equivalent of a 5 minute egg?

Goofyhoofy how do you boil a lot of eggs at one time and not end up separating out the copper and sulfur? How many can be in the pot and how much time do you give them

Start water in pots, takes about 6-7 minutes to come to a boil. While you’re waiting, poke holes in the top of each egg with a push pin (it lets the air inside the shell escape when you put it in boiling water so the egg doesn’t explode in the pot.)

Put the eggs in the pot, one by one using tongs, group the eggs starting at one side and fill the pot to the other side. This is so when you take them out they will all cook for an equal amount of time because you remove them in the same (rough) order they went in.

Let “very low” boil for 11 minutes. Remove. They will dry off within a couple minutes. Put in a Tupperware with a folded paper towel at the bottom to wick away moisture. Done.

Easy peel, don’t have to deal with it for another 3 weeks.

When you first put the eggs in the water may stop boiling but it’s OK, it’s still near 212 degrees; t’ll come back quick.

Yeah, we each about 30 eggs a month, each. If we’re having an egg dish for dinner well have something else besides our “egg and banana” for breakfast. We only buy free-range or cage free (when FR not available), but that’s just us.

I also mostly eat an egg and banana for breakfast. Once a week Trader Joe’s Steele Cut Oatmeal.

I am all over the place schedule wise. If I have ten minutes in morning I will continue to boil one egg at a time. I do not like the idea of 30 eggs in my fridge getting old. Boiling them to eat each time is safer…for me.

I do not like the idea of 30 eggs in my fridge getting old. Boiling them to eat each time is safer…for me.

Understood. I wasn’t advocating a 30 day supply. There are two of us, so it works out to about 2 1/2 weeks or so. (Occasionally I will have two, one in the morning, one as an afternoon snack.)

A raw egg will last 3-5 weeks and be perfectly fine. A hard boiled egg won’t last that long, and over two weeks they can start to get a little oily feeling. They will still taste OK, right up until they don’t (and you’ll know.) Officials say “up to 7 days” but that seems unduly restrictive me, given that I’ve been doing double that for 20 years.

I just like stepping up to the fridge, grabbing an egg, and going about my business. That, and using 10 times less gas to boil the water rather than doing the one at a time.

I eat at least 4 eggs a day. Between that and the rest of the family, general cooking, and periodic baking, we go through a lot of eggs. The price increases have been quite noticeable here.

Based on a recent podcast I heard, there is no “big egg”, eggs are primarily farmed by family businesses, some very large, others smaller. But there is an egg commodity market (though no futures) for price determination.