What good is NATO?

The question was to bring back into focus the last time someone tried to appease a despot in Europe.

Don’t forget Bosnia and the Balkan wars in the '90s.

Why Europe Failed to Halt The Genocide in Bosnia
www.wrmea.org/1993-april-may/why-europe-failed-to-halt-the-g…
There is no doubt that Europe has singularly failed to resolve the conflict in Bosnia. Neither can one ignore the irony that as the European Community races toward unification, its increasingly wretched neighbors in the east and south face violent disintegration…

By 1991, the Yugoslav federation had been plunged into full-scale war, beginning with a pitiful attempt by the Yugoslav Army (JNA) to prevent Slovenia’s secession, leading to bloody conflict in Croatia and then entering its genocidal phase with the war in Bosnia.

As the war in Bosnia marks its first anniversary, the real costs in human terms are well known: almost two million refugees, who face a precarious future in an unwelcoming Europe. Approximately 140,000 dead and a further 750,000 ‘missing,’ according to figures released by the Institute for Public Health in Sarajevo, the Bosnian capital. Nearly 30,000 women systematically raped by Serb insurgents…

The question was to bring back into focus the last time someone tried to appease a despot in Europe.

You moved from ad hominem attack to Strawman. You are on a roll.

No one suggested appeasement. Clearly, we (i.e. the West) are not appeasing Russia with all of our sanctions and delivery of arms. Just because you want more (and here is a little secret for you - so do I), doesn’t mean it should be done lawlessly.

Nato is flying in relief supplies and materiel to the Polish side of the border with cargo planes landing every two minutes, reminiscent of the Berlin airlift. Russia is having a tough slog for a reason.

The ends do not justify the means. If NATO attacks, then Putin will be (at least partially) right.

By that logic Hitler, Stalin and Mao were partially right and giving them a bigger head start we’d be writing this in something other than English. Okay now.

When I asked you what do you believe that was meant as what is your thinking. As you said your beliefs do not matter. Meaning you have not analyzed this situation much if at all. Now I know to discount your lack of work on this.

As far as NATO sticking to its charter that was to defend against an antagonistic Stalin. Putin is now becoming as aggressive. This does not stop at all. That is why I wanted your counter thoughts. You are not seemingly thinking that reality over.

Russia isn’t throwing Intercontinental Ballistic Missiles at the Ukraine it IS using short range tactical rockets which are the same weapons the Russians supply to Hamas.

You cant be that old oldtimessFoolish. The topic was nuclear war if the US and Russia face off in military combat. Are we defended by our antiballistic weapons.

The Ukrainians need our more immediate air defense. Currently we are expecting a nuclear response if we assist Ukraine with direct military force against Russia.

First sign that someone is losing the argument is an ad hominem attack.

doesn’t mean it should be done lawlessly.

The topic was nuclear war…

No, the original topic was NATO defending Europe from attack by Russia, which last time I checked he is currently doing, and before you answer look up the location of the Ukraine.

Europe is one thing

EU is another thing

NATO is a third thing

And the NATO nations for the most part are located in Europe.

If Putin gets his way in the Ukraine it is a short step into Poland, Lativa, Estonia, etc., if history is any example it shows his next move.

So far Putin is thinking NATO, who cares? All talk and no action.

You are FULLY discounted.

Instead of “wah”,perhaps a bit of self reflection is in order. Your posts read as though you have certainty on many subjects. You could be mistaken.

Instead of “wah”,perhaps a bit of self reflection is in order. Your posts read as though you have certainty on many subjects. You could be mistaken.

Most of the members here can handle differences of opinion extremely well and with grace. There are no problems with stating facts and opinions. Our contributions are extremely good on this board.

There are a handful of “your crazy uncle who the family just tolerates every Thanksgiving” that are more outspoken and very thin skinned. Their contributions are welcome. There ability to work with opposing opinions is weak to non existent.

When someone stomps off with his marbles because of second or third points of view their self control is highly questionable. I will take absolutely no responsibility for anyone else’s behavior. We are all grownups taking responsibility for our own behaviors and thoughts. At least that is what I am going by.

I am enjoying the readings here by the entire group. I look forward to the readings by the majority of posters where more than one point of view in the responses is the norm.

Jim like you I am of an age where both of us have that options to be the crazy uncle or to hold off and let others speak with respect. The wah is reality of crazy uncles. Something I definitely am not.

As far as confidence goes…how does that mean your opinion would be less? It is not less when someone else is confident in themselves. Also I am very reflective. Two weeks ago I was on about the top of the oil market. Within days I was admitting I was wrong in these threads. Watching last Tuesday’s top carefully, I cam back in on Thursday to mark the current top as being in. I took my time and thought things over a great deal. That is actually where my confidence is coming from mostly by acknowledging to myself and others when I am wrong.

If anyone has questions about missile defense systems they should ask Israel as they have the most pracitical experience under war like conditions.

I am saying the most effective systems need time. Hence ICBM are often an easier target to be accurate in taking down. Israel has a hard time hitting small rockets that are brief blips in the sky. Though there was a report of using lasers a few weeks ago.

Hence ICBM are often an easier target to be accurate in taking down.

The research was worth doing.

The entire thing is a no go. According to one MIT expert not worth even trying to do.

It might work against NK. It wont work at all against Russia. 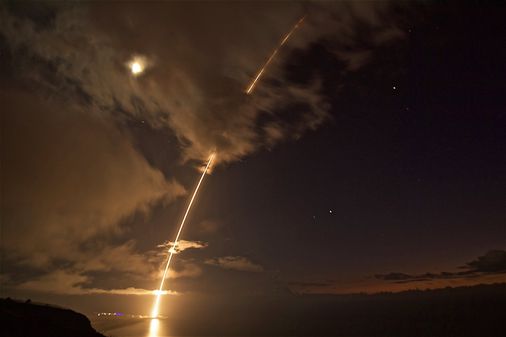 After four decades and $200 billion, the US missile defense system is no...

Official Pentagon policy states that its system is only designed to protect the nation from nuclear missiles fired by a rogue state like North Korea. For a military superpower like Russia, the US depends on its own vast nuclear arsenal of about 5,400...

Just remember, if the US was able to create an anti-missile system which was 99% effective and Russia launched 5,400 missiles at the US, only 54 of our cities would be destroyed (and the country turned into a radioactive wasteland). Against a superpower, reciprocation of those results is the deterrent factor.